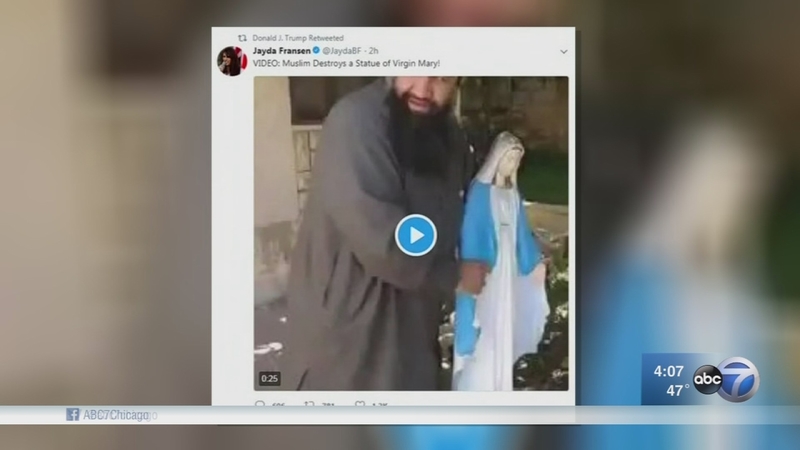 CHICAGO (WLS) -- President Donald Trump ignited another firestorm and stoked anti-Muslim sentiments by retweeting a string of inflammatory videos by the leader of a nationalist far-right extremist group.

The Muslim community is outraged, calling the president's retweets disgusting and dangerous. Terrorism experts said the social media posts play right into the hands of ISIS. The anti-Muslim videos were posted by Jayda Fransen, a leader of a British extremist group who has previously been charged with religious aggravated harassment in the United Kingdom.

"It's irresponsible on behalf of the president of the United States to engage in what I call a form of gossip and that gossip has very negative consequences to it," said Gregory Abdullah Mitchell, of The Council of Islamic Organizations of Greater Chicago.

The videos were titled "Muslim migrant beats up Dutch boy on crutches!," "Muslim destroys a statue of Virgin Mary!" and "Islamist mob pushes teenager boy off roof and beats him to death."

Posting to his 43.6 million Twitter followers, the president never verified the content. The Islamic Organization of Greater Chicago is worried the tweets will add fuel to the rise of islamophobia in the United States.

"Whether it's some form of verbal abuse, bullying or actually being attacked - this is a phenomenon we're most concerned about in the Muslim community," Mitchell said.

On Wednesday, the White House defended the tweets, saying the president's intent is about national security.

"Whether it is a real video, the threat is real. That is what the president is talking about," White House press secretary Sarah Sanders said.

But, terrorism experts say Trump is playing right into the hands of ISIS. University of Chicago's Dr. Robert Pape said the terrorist organization recruits people with propaganda videos that paint the United States government as anti-Muslim. He said Trump's tweets could be fodder for the next attack.

"Ninety-nine percent of America could write this off as Trump as a crazy uncle or this is about Trump as politics for his base, but we only need that tiny fringe to be radicalized by ISIS videos to kill U.S.," Pape said.