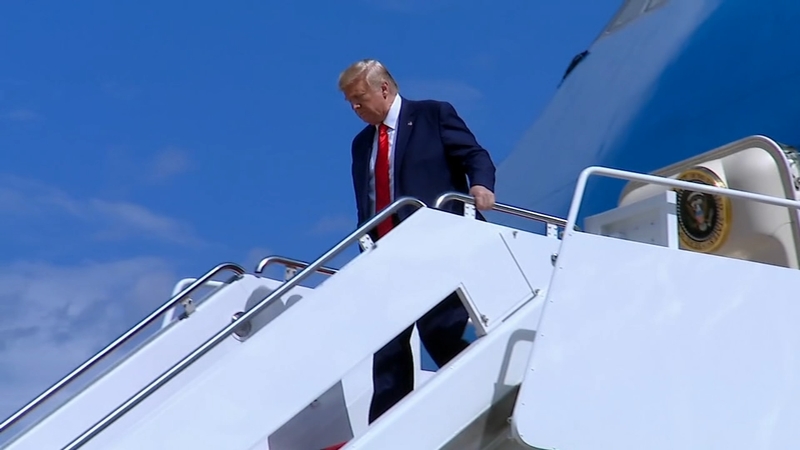 CHICAGO (WLS) -- Chicago police superintendent Eddie Johnson says he will boycott President Trump's Monday speech to the International Association of Chiefs of Police's 2019 conference, but hundreds of extra CPD officers will be on standby, the ABC7 Chicago I-Team has learned.

In addition to the usual contingent of Chicago police deployed for big events at McCormick Place on the Near South Side, an extra 1800 uniformed officers will be available if needed, according to sources familiar with security planning for Monday's presidential visit and expected protests.

The conference is being held October 26 to 29. President Trump will arrive in Chicago late Monday morning and attend a fundraiser at Trump Tower, the hotel bearing his name on Chicago's riverfront. From there the president will proceed to McCormick Place where he is scheduled to speak to police chiefs about crime at 2 p.m.

Security planners for the president's event say they are prepared for protests at any point during the presidential visit, especially as impeachment moves in Washington have gained steam.

Chicago police officials on Friday told the I-Team that they are "committed to ensuring demonstrators for any planned events can express their opinions in a safe and responsible manner, within the boundaries of the law."

Monday's visit is the president's first to Chicago since being elected president nearly three years ago. He has been highly critical of the city on occasion, especially what he perceives as a burgeoning violent crime problem. Mr. Trump and his Justice Department have also done battle with Chicago concerning its status as a "sanctuary city" for undocumented immigrants living illegally in the city.

Trump's last large-scale visit to Chicago didn't end well. A major appearance at UIC in March of 2016 had to be cancelled at the last minute because of security concerns and throngs of angry demonstrators ringing the west side arena. Thousands of Trump supporters were left in the lurch when the event was scrubbed.

The Trump visit on Monday became controversial this week when Chicago Police Superintendent Eddie Johnson said he wouldn't attend "because the values of the people of Chicago are more important than anything that he would have to say." His boycott of the president's speech comes as CPD rolls out the welcome mat for police officials from coast to coast.

"I look forward to hosting America's police chiefs and collaborating on the best ways to keep our cities safe in the upcoming week," Johnson said.

Even as CPD deploys a sizable contingent of officers to deal with the expected protests, U.S. Secret Service has the lead anytime a presidential visit is involved. The Secret Service Multi-Agency Communications Center (MACC) is expected to be on scene that acts as a security nerve center. Between the MACC and CPD's emergency communications center, thousands of cameras will be monitored during the presidential visit and protests, authorities said.

Security plans are not made public, for obvious reasons, but it is likely that President Trump will never come close to protesters. Typical logistics for the visits of presidents, foreign dignitaries and some celebrities, call for the use of cordoned off lanes inside protected perimeters and in some cases tunnel access to buildings such as McCormick Place.