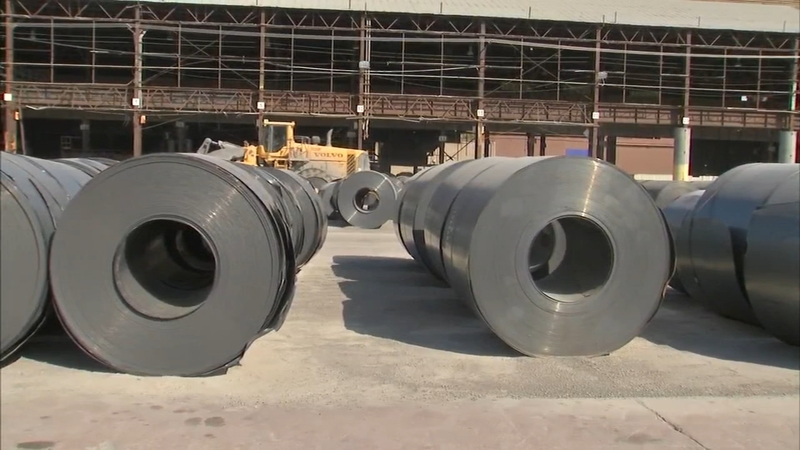 GRANITE CITY, Ill. (WLS) -- President Trump arrived to somewhat of a hero's welcome at the U.S. Steel mill in Granite City, Illinois, just a few miles across the Mississippi River from St. Louis.

This plant laid off some 800 workers in 2015, but back in March, when Trump imposed tariffs on some foreign steel producers, the Pittsburgh-based company announced it would again fire up two of the plant's blast furnaces and rehire workers, bringing back hundreds of jobs to the town.

Many of the workers credit Trump with bringing back jobs that are vital to this blue-collar steel town. The steel industry has struggled with foreign competition, particularly from China, that has cheaper labor costs and government support.

"It's a good thing that Trump did what he did," said Bobby Naler, a steelworker who attended Thursday's event. "A lot of people went back to work, a lot of families happy to be back to work."

Brian Howell was a steelworker who was laid off for 10 months.

"It's hard to find another job and I was glad to get called back," he said. "Means a lot to me. I think he did a good job."

This was Trump's first visit to the state since taking office, and although this is an area that went for Hillary Clinton in 2016, the community seems to be standing with Trump at the moment thanks to his tariffs.

"Man, it's been great. I mean this is been a big, big boost to the economy and means a lot to the people in the city, and it means a lot to me. I love this job, it's one of the best jobs I've ever had," said Charles Dailey, another steelworker who was called back to work.

Trump said these workers were "pouring steel back into the spine of our country" - and making a statement.

"We're sending a message to our foreign competitors, days of plundering American wealth are over," he said.

Local businesses have a sense of cautious optimism. Bill Watson, who owns Bindy's Bar, said he isn't expecting to see a major uptick, at least not right away.

"It's hard to say about business because a lot of those people have been out of work and they're not going to start working and all of a sudden start coming out and spending money," he said.

"U.S. Steel has announced about 800 jobs, and that's terrific," said James Amos, Granite City's economic development director. "But in addition to that, we have about 40 business in this sector of heavy metals manufacturing, and so it's exponential."

Governor Bruce Rauner was not be present for Trump's visit, saying he was just in Granite City a week ago and had other events on his schedule Thursday. The mayor of Granite City, a Democrat, also was not in attendance, citing a previously-scheduled event elsewhere.