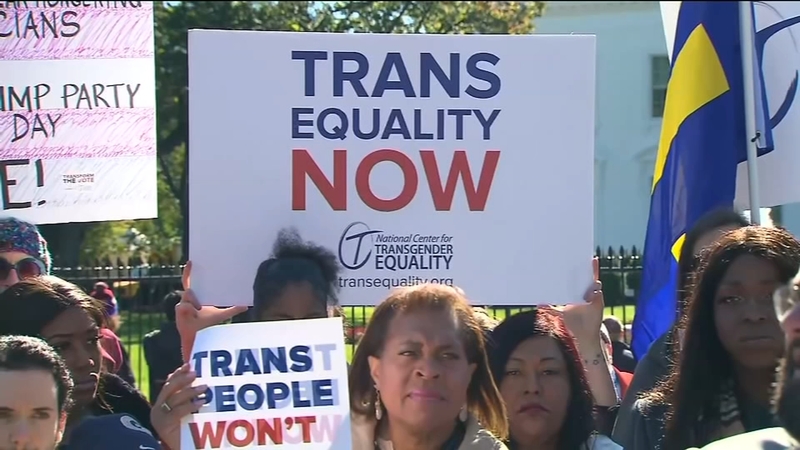 CHICAGO (WLS) -- Local advocates and members of the transgender community sounded an alarm Monday after a report was released saying that the White House is considering a new definition of "gender" that would deny federal recognition and civil rights protections to transgender Americans.

Reyna Ortiz was born male, but has identified as female since she was 13 years old. Ortiz is one of 1.4 million Americans who identify as a gender other than the one they were assigned at birth.

"We are living our truth, we feel this is what we were made as people and now we have to project it from the outside," said Ortiz.

She and others said their ability to live their truth is under threat with the Trump administration's latest attack on transgender Americans. According to a New York Times report, in an effort to establish a legal definition of sex under Title IX, the Department of Health and Human Services is considering defining one's sex by genitalia at birth.

"A lot of different things happening with respect to transgender right now. You know that as well as I do, we are looking at it very seriously," Trump said at a rally.

LBGT organizations in Illinois and across the country call the proposal blatant discrimination.

"The administration is once again saying to people with a wink and nod who want to discriminate against transgender people that they have the full backing and support of this administration and president. That is absolutely terrible," said Brian Johnson, CEO of Equality Illinois.

Ed Yohnka, of the ACLU, said the organization is planning a legal fight if the Title IX definition of gender is changed.

"What this would really do is suggest through regulation and definition that people who are transgender simply don't exist," Yohnka said, which means transgender Americans would not be protected under federal civil rights laws.

The ACLU plans to use science to argue against the proposal. Weiss Hospitals Dr. Loren Schecter has performed hundreds of gender reassignment surgeries. He said limiting the definition of gender to anatomy at birth negates 100 years of science.

"We know from twin studies, data, research, there is more to sex than anatomy, it's really an internal self of who they know themselves to be," Schecter said.