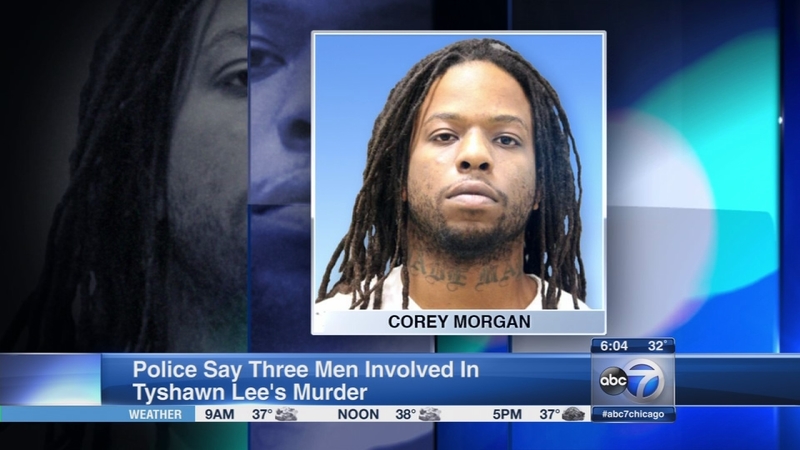 CHICAGO (WLS) -- The man charged Friday in the murder of 9-year-old Tyshawn Lee is accused of luring the boy from a nearby park and into an alley to be gunned down because of his father's alleged gang ties.

A Cook County judge denied bond for Corey Morgan, 27. During a Friday bond hearing, the judge yelled and berated Morgan, calling him a predator and a danger to the community.

Police are still looking for Kevin Edwards, a second suspect in the murder. Dwight Boone-Doty, a third suspect, is jailed on an unrelated charge, police said late Friday.

Documents from Cook County prosecutors outline the moments before the shooting, stating that Tyshawn was on a swing set at park when he was approached by the men who planned to kill him as part of a raging gang war between two South Side factions.

Corey Morgan is charged with first-degree murder in the fatally shooting of 9-year-old Tayshawn Lee.

McCarthy said Morgan is a documented gang member and convicted felon. Investigators had been questioning Morgan in the case. He was arrested on an unrelated gun charge and was released on bond earlier this week.

Around 4 p.m. on Nov. 2, Tyshawn was lured into an alley near West 80th Street and South Damen Avenue and executed, police said. He was shot in the head and suffered several graze wounds.

Tyshawn's family said he loved to play basketball and video games. A basketball was found in the alley near his body.

McCarthy said the men's precise roles were still under investigation but that all were members of the same gang, which the police chief vowed to destroy: "That gang just signed its own death warrant," he said.

McCarthy praised local residents, saying they overcame fears and risks of retaliation to come forward and offer tips to police.

"If you have a monster who's willing to assassinate a 9-year-old, what is that person likely to do if they know that somebody's cooperating with the case?" McCarthy said during a news conference.

Mayor Rahm Emanuel said in a written statement Friday afternoon: "I would like to commend Superintendent Garry McCarthy, the leadership of the Chicago Police Department, and the men and women of the police force for identifying the individuals believed to have targeted and killed nine-year-old Tyshawn Lee. All of Chicago grieves for this young life taken far too soon, and we must ensure that justice is served."

Investigators said the dispute that led up to the killing had been ongoing for about three months between warring gangs and involved at least two other killings and several non-fatal shootings. Authorities said Morgan was a convicted felon with an extensive violent criminal history, but didn't provide details.

The law firm representing Morgan did not immediately return a phone message seeking comment on the case.

Detectives have not recovered the murder weapon, but they believe only one person fired because all the spent bullet casings were from a single gun, McCarthy said.