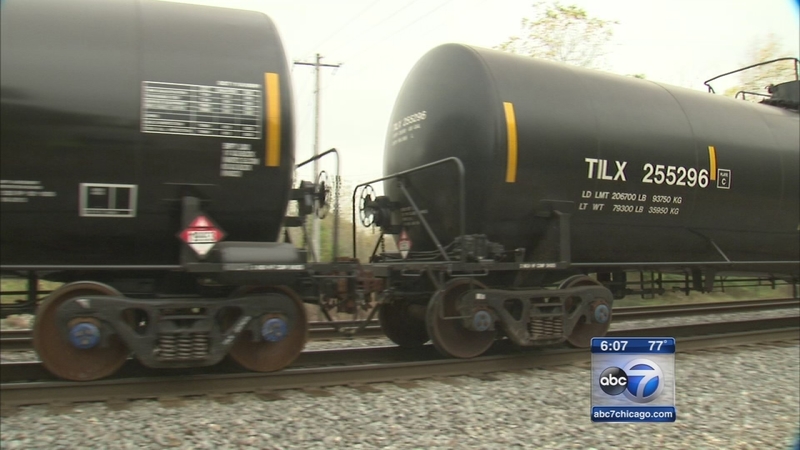 BARRINGTON, Ill. (WLS) -- The ABC7 I-Team has new developments in the fight to protect Chicago and the suburbs from dangerous railroad cargo. The very people and groups who would be most affected by a rail tanker calamity, now say they are being excluded from the process of finding a safe solution.

Two suburban Chicago mayors have told the White House that rail industry executives are just "playing the odds" that a fiery tanker explosion will happen away from populated areas- and they say that is a "fool's game." Those stinging comments come in a letter to the Obama Administration that is critical of a curtain of secrecy they say has been built around the rulemaking process.

In the suburbs Friday morning, a procession of DOT-111 tankers hauling crude oil toward Chicago is daily evidence here that crude oil transport by rail is up 4000 percent in the past six years. With it, an increase in derailments, fires, explosions, damage and deaths. The original DOT-111 tankers weren't constructed to handle hazardous, flammable cargo.

So, federal regulators are moving faster on new rules to protect the public. But in a dozen recent meetings between the Obama Administration and officials from the rail, petroleum and chemical industries, the public hasn't been at the table.

The lack of transparency has Barrington President Karen Darch angry and Aurora Mayor Tom Weisner says their suburban downtowns could be obliterated in a major tanker accident.

Their letter this week to the White House calls for new rules to retrofit or retire the entire current fleet of DOT-111s, and build new tank cars to higher standards. "Anything less," they state "is a grave disservice to the American public and its expectations that federal regulators are serving their public safety interests."

One of the nation's major rail freight operators- CSX- has it's "safety train" rolling toward stops in northwest Indiana and Chicago. In New York this week, the rolling classroom trains first responders on what to do if a hazmat tanker derails, ruptures and blows up.

"We know there are hazardous materials on rail, on the road, every day in our community. Our key is to be prepared to handle any eventuality," said Kevin Wisley, Syracuse Emergency Management.

Reporter: "Do you think they are a safe car?"

Bethge: "They are a safe car."

The CSX safety train will be making stops in Rochester, Buffalo, New York City, and Cleveland before heading through Indiana and to Chicago this summer. By the time the whistle stop tour is over, government officials may be close to fixing a problem that the National Transportation Safety Board first identified 20 years ago when it described the tankers as inadequate.
Related topics:
barringtonauroraiteamoili teamtrains
Copyright © 2021 WLS-TV. All Rights Reserved.
More Videos
From CNN Newsource affiliates
TOP STORIES