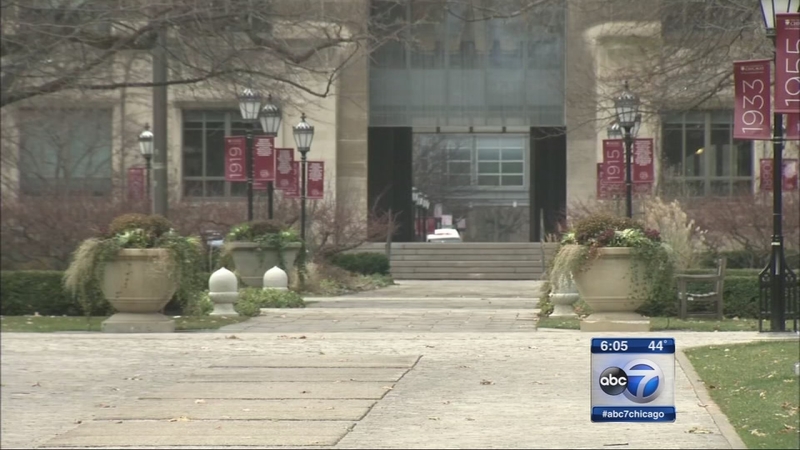 UIC student arrested for U of C threat

CHICAGO (WLS) -- A University of Illinois at Chicago student has been arrested in connection with an anonymous threat of gun violence that led officials to cancel classes at the University of Chicago in Hyde Park, officials said.

University officials said classes and events will resume as normal on Tuesday.

Jabari Dean, 21, was charged in federal court with transmitting a threat in interstate commerce, according to the criminal complaint. The complaint says Dean threatened online to come to the University of Chicago campus at 10 a.m. Tuesday and execute 16 white men, one for each one of the times 17-year-old Laquan McDonald was shot by Chicago police officer Jason Van Dyke.

The U.S. Attorney's office said that Dean also stated in his posting that he intended to die "killing any number of white policemen I can in the process."

The U.S. Attorney's office is not expected to argue bond, and is expected to agree to home monitoring as the FBI believed Dean did not have the means necessary to carry out his threat. Dean is due in bond court Tuesday at 1 p.m. when he is expected to be released into his mother's custody.

UIC Chancellor Michael Amiridis said the university is closely monitoring the situation, and the administration is "concerned about the impact this has had on our campus and the University of Chicago."

Congressman Bobby Rush was among those briefed by the FBI following Dean's arrest.

The threat prompted a complete shutdown of the school, turning the Hyde Park campus into a virtual ghost town except for a heavy police presence. Students mostly stayed away from campus, even though they were unsure of the threat's credibility.

"Especially in this environment where you see all these shootings at other schools, at other places, I think they just decided to err on the side of caution, which I think is a smart move," said Keegan Boyar, a PhD student at U of C.

Students at University of Chicago are in their last week of regular schedule before finals begin next week. More than 30,000 students, faculty and staff attend classes and work at The University of Chicago, which was ranked No. 4 in the nation by U.S. News and World Report.