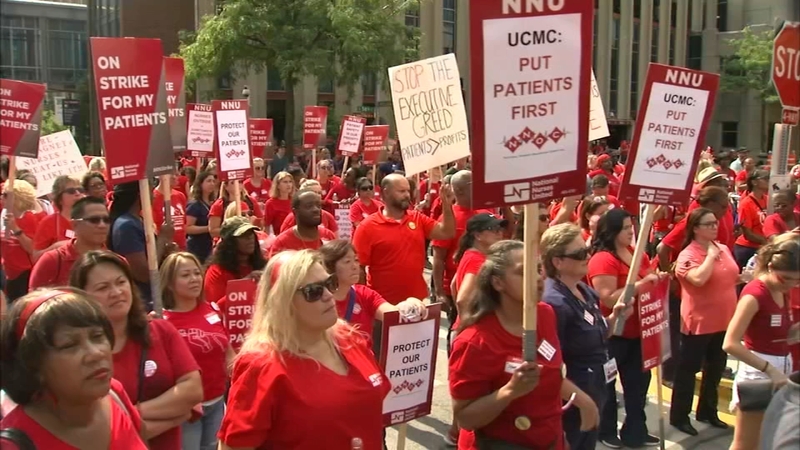 Starting at 7 a.m. 2,200 University of Chicago nurses traded in their scrubs for picket signs.

"This is not anything that we wanted to do but we have to do certain things for our patients," said nurse Sonja Proctor.

Contract talks broke down late Wednesday night making way for the 24-hour strike that's part of several nurses' strikes across the country. Nurses here say their main issue is staffing and not having enough of it.

"So consistently our workloads have been getting heavier," said nurse Talisa Hardin. "We've been taking care of the sickest patients. We've been low on supplies, on equipment, on staff. I think it's to the point now where we feel like we just can't take it anymore."

Hospital representatives say they made a generous staff offer, but the union rejected it.

"We are prepared to continue operations and care for our patients in need of our services," said Sharon O'Keefe, president of the University of Chicago Medical Center.

Meanwhile, for the next five days, certain trauma programs are closed and dozens of patients have been relocated, while others have put their care on hold.

"I think any change in your routine puts a strain on the system but we're grateful that we spent many months preparing for an event like this," said Stephen Weber, chief medical officer of University of Chicago Medicine.

The hospital has hired replacement nurses from across the country who will be working here for five days.

"I'm honestly curious to know what's happening in there right now because it can't be the same. It's not easy to navigate unfamiliar areas," said nurse Patrick Crowe.

Hospital officials said that the hospital is safe now and it always has been. They hope this can be resolved soon and said there are some bargaining sessions set for next week.

The University of Chicago Medical Center's communications department said the hospital has been negotiating with nurses since March, and that the nurse staffing levels are the best in the state. Nurses disagree.

Neonatal Intensive Care Unit Nurses Kristin Simon and Jennifer Ransford said the nurses in the NICU are overloaded, and they can't fully prepare families to care for their children after they are discharged from the hospital.

The nurses also said the lack of contracted nurses with NICU specialties caused infants to be moved to other hospital during the strike.

"People are crying today, we don't want to be here, we want to be (in the hospital)," Ransford said.

For the next five days, certain trauma programs are closed and dozens of patients have been relocated, while other patients have put their care on hold.