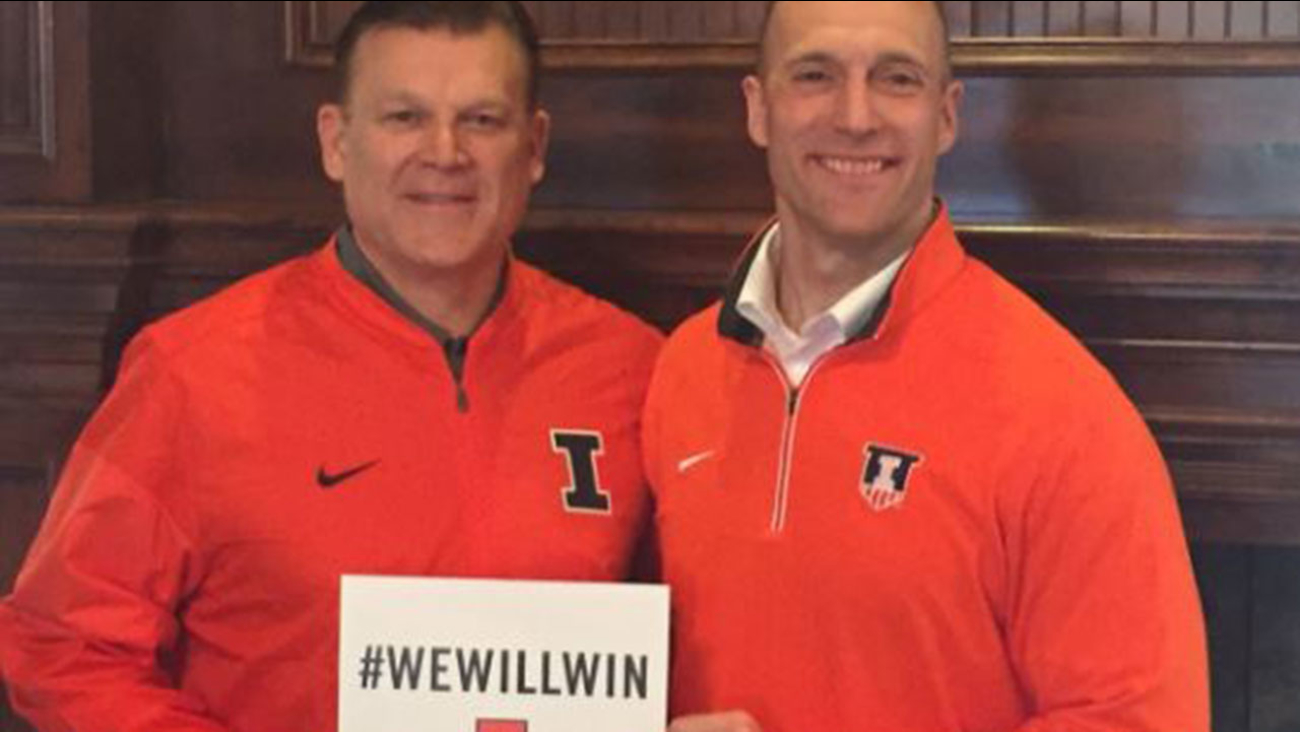 A year ago, Brad Underwood's Stephen F. Austin squad lost to Notre Dame in the NCAA Tournament, and he took the job at Oklahoma State the next day.

A year later, history repeated itself. A day after Oklahoma State lost to Michigan in the NCAA Tournament, Underwood accepted the job at Illinois. He called the chance to lead the Fighting Illini a "once in a lifetime opportunity."

"I can't wait to get started with our team," Underwood said in a statement. "Next season can't get here fast enough for me!"

Underwood spent three successful seasons at Stephen F. Austin before signing to coach Oklahoma State. The Cowboys got off to a rough start to Big 12 play before rallying down the stretch to land an NCAA Tournament bid. Oklahoma State fell to seventh-seeded Michigan 92-91 on Friday, closing out Underwood's only season in Stillwater.

"You see a lot of coaching changes across America, but very rarely do you see one after just one year," Kansas coach Bill Self, an Oklahoma State alum, said. "But Brad's a really good guy and done a great job. But from the outside looking in, it looked to me like OSU and Brad fit very, very well."

In his first speech at Oklahoma State, Underwood talked about his desire to return Oklahoma State to the level of the Henry Iba and Eddie Sutton glory days. It worked - he brought fans back to Gallagher-Iba Arena after they had become apathetic toward the end of Travis Ford's stay.

Now, Oklahoma State has to look for a coach again after being raided by a Big Ten school.

"We are saddened and disappointed in Brad's decision to leave Oklahoma State after one year," Oklahoma State athletic director Mike Holder said in a statement. "We are trying to digest this news."

Illinois was impressed with Underwood's 109-27 record as a Division I coach and the fact that he has reached the NCAA Tournament in each of his four seasons.

"We were looking for a proven winner who would build upon our proud tradition while developing an unmistakable identity for Illinois basketball," Illinois athletic director Josh Whitman said in a statement announcing the hire Saturday. "Brad's teams play a fast, aggressive style and show unyielding toughness."

If he did not have permission to leave, according to Underwood's contract, he owes Oklahoma State $3 million.

Whitman also went big-time in bringing in Lovie Smith to lead the football program a year ago. His first recruiting class was ranked No. 34 by Scout.com and No. 45 by 247sports.com, and recruits have raved about Smith.

Underwood replaces John Groce, who was let go earlier this month. The Fighting Illini went 95-75 in five seasons under Groce but made just one NCAA Tournament appearance.

Self, who was the head coach at Illinois before he took over at Kansas, raved about the opportunity there.

"Illinois is a great basketball job," he said. "I was there. There's no other way to look at it. It's one of the better jobs in the Big Ten. If you look at recruiting base and institution, location, exposure, budget. There's a lot of things about it that is very, very attractive."

Underwood, 53, spent 11 seasons as an assistant coach at nearby Western Illinois and spent one season as the associate head coach at both Kansas State and South Carolina before landing at Stephen F. Austin. A Kansas native, he said he enjoyed his run at Oklahoma State.

"The players, fans and administration at Oklahoma State have been absolutely incredible, and I want to thank them for the support they've given me and my family over the last year," Underwood said. "However, during my time at Western Illinois, I always saw the Illinois coaching job as one of the truly best in the nation."
Related topics:
sportscollege basketballu.s. & worlduniversity of illinois
Copyright © 2022 by The Associated Press. All Rights Reserved.
TOP STORIES
19 children, 2 adults killed by gunman in TX school shooting
Uvalde school shooting: What we know about 19 kids, teacher killed
Father of Texas yoga instructor accused in cyclist's murder speaks out
Park Ridge firefighter 1 of 2 injured in apartment building blaze
Republican candidates for Illinois governor face off in 2 forums
Illinois leaders call for gun control after deadly school shooting
Chicago expected to move to 'high' COVID level by Friday, Arwady says
Show More
Gary teen killed in shooting identified by family
Chicago Weather: Showers and storms Wednesday
Woman shot near CTA Red Line stop on South Side
1 killed in 10-vehicle crash on I-294 in Glenview
Long COVID symptoms mainly affect women in their 40s, study finds
More TOP STORIES News