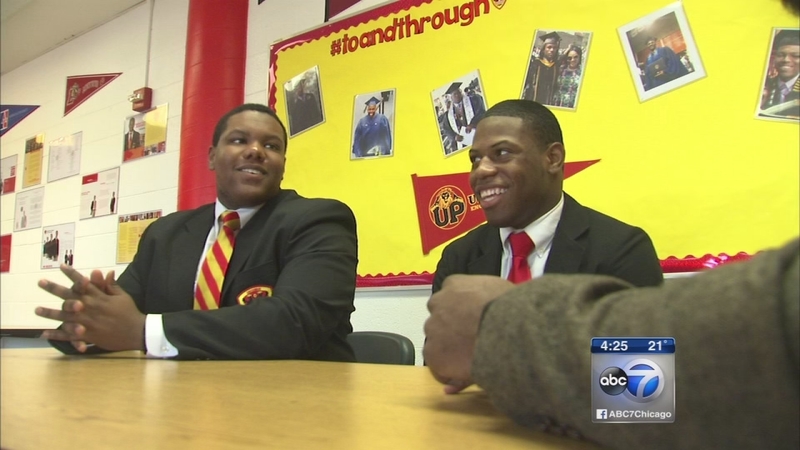 CHICAGO (WLS) -- As Black History Month draws to a close, we have an update on some young African American men who got a lot of attention when they were the first students at an all-male, 8 hour a day academically strenuous high school called Urban Prep.

In June 2010, Bryant Alexander led the first graduating class of Urban Prep High School. All 108 young African American men were going to college. The strenuous, disciplined program at the South Side school was designed to prepare them for the challenge, but it turns out the next four years would not be easy.

"When I got there, it was a struggle," says Alexander. "I came from a predominantly black neighborhood and DePauw is a predominantly white school. It was a culture shock."

To varying degrees, all members of the first graduating class faced struggles in college.

"Everyone takes luggage to college," says Tim King, founder of Urban Prep. "Some people need extra help unpacking that baggage. Our graduates fall in that category. We had one alum who attempted suicide in college. We redoubled our effort, provided support. It's taken him a little longer, but now he's on track to graduate from college."

Urban prep counselors and teachers made helping their alums a priority. Along the way, an idea was formed.

"Hey," says King, "we got kids who made it through college. Bring them back to be the ultimate role models. So we developed Fellows program."

Jessie Mack, who graduated from Denison College in Ohio, is one of the first fellows.

"I felt my responsibility," Mack says. "As the creed says, we are our brother's keeper."

Mack is going beyond being his brother's keeper. He helped his brother Delrico, who graduated from urban prep last year, but Mack's success also brought other family members to Urban Prep: cousins Damien, Malek and Justin.

At Bryant's graduation from DePauw University in Indiana, two of his Urban Prep mentors were there.

Bryant now helps Urban Prep high schoolers, preparing them for issues they will face when they get to college.

After playing football at DePauw, Bryant wanted to go into sports management, but working now as an Urban Prep fellow, he's found his calling.

"I feel like it's my responsibility to help African American men get through college," he says. "The problem is not getting them to college, but helping them graduate."
Urban Prep's commitment to their alums includes making sure a staff member from the school attends the college graduation of each student.

Urban Prep now has three campuses. Next September, the first campus outside of Chicago will open in Washington D.C.