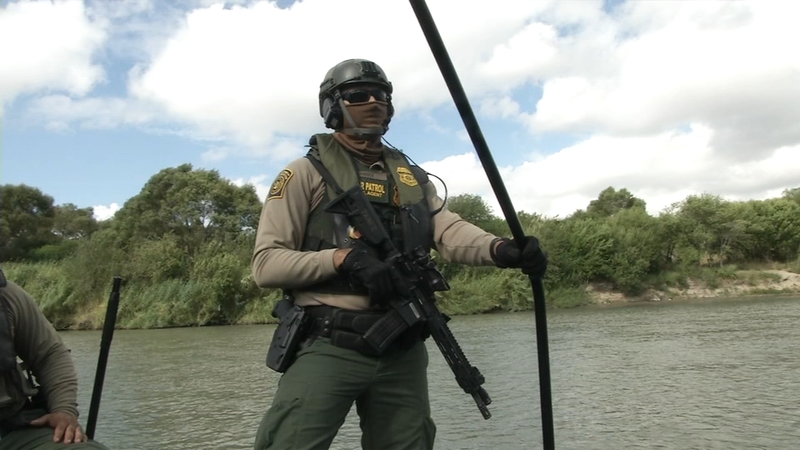 LAREDO, Texas (WLS) -- It's a time of upheaval for Customs and Border Protection. There's a new acting head of Border Patrol, and a new head of Homeland Security, the fourth in nearly three years under the Trump administration.

There are reports of President Donald Trump asking for moats filled with alligators to deter undocumented immigrants. But the men and women of Customs and Border Protection on the ground in Laredo, Texas, said they try to keep politics out of their job.

After requests over the past year for access, ABC7 Chicago was invited by CBP for a rare behind-the-scenes look at their mission to secure the border.

In Laredo, Texas, the billboards encourage drug dealers to turn in their competition. It's just a stone's throw from cartel country in Mexico.

Here officers and agents are tasked with enforcing US immigration laws, and keeping drugs and terrorists out of the country.

Much of the enforcement effort is tracking migrants who try to cross into the U.S. illegally.

Agents and officers are on the water, on horseback, at ports of entry and checkpoints, and in the air.

And ABC7 Eyewitness News was there with them.

We were in a CBP helicopter as a group packed into a truck tried to avoid border patrol agents. They ran into desolate ranch land trying to hide under trees and cacti, canine units and agents on the ground were called in to assist. Eventually, the people running were apprehended.

But the spurts of action punctuate long, tedious hours of patrol made harder under cover of darkness.

On another night, border patrol agents search for a group spotted crossing the Rio Grande from Mexico.

"Here, especially with the caravans we have had a lot of illegal immigration," said Laredo Director of Air Operations Brian Paul. "So we are kind of the eye in the sky for the border patrol agents on the ground."

CBP said the Laredo area does not see the overwhelming numbers of asylum seekers like other points along the borders because of cartels.

"The cartels got such a strong hold here in Laredo," said Deputy Chief Border Patrol Laredo Sector Joel Martinez. "Since this place is so lucrative for them, they didn't want to risk it with family units coming over here and then they couldn't get their drugs across."

But Laredo is a major port of entry, and there are still plenty of people coming from Mexico. Some come to work or shop for the day, others cross to seek asylum, legally.

ABC7 cameras watched at Gateway to the Americas International Bridge where more than 10,000 people cross by foot every day from Nuevo Laredo in Mexico to Laredo at the U.S. border.

Inside of a massive gateway complex at the bridge, there are areas to process people who arrive without documents. ABC7 Chicago was granted access to this processing and detention area.

Our cameras were rolling as asylum seekers from all over the world, some just teenagers on their own, were interviewed and processed.

Inside the processing facility, ABC7 cameras saw a pregnant woman, families held with their young children in antiseptic, but jail-like conditions. Men were fingerprinted in a section where fans do little to dissipate the odor of struggle and desperation hanging heavy in the air.

After the processing, under a Trump administration agreement with Mexico dubbed the "Migrant Protection Protocols," or MPP, asylum seekers are walked over the bridge back to Mexico to await their immigration court date.

That hearing will happen in a makeshift court inside of a white tent building at the Gateway Bridge. News outlets, along with ABC7 Chicago, are not allowed inside.

The average wait for asylum seekers, according to Flores, is more than a month in Nuevo Laredo's dangerous cartel country.

"We work very closely with our partners in the government of Mexico and they have assured us that they are taking all measures to ensure the security of the people that are being returned back to Mexico," Flores said.

Ashley Huebner, the associated director of Chicago-based National Immigrant Justice Center, has been inside of the Laredo immigration tent court. She said it's intentionally unfair.

"They're being forced to remain in extreme danger in Mexico while they're waiting for their case to be decided," Huebner said. "And often have to make the choice of, 'Will I have to remain in Mexico where I can barely support my family, where I'm facing kidnapping and extortion and ransom demands?'"

"The point of this policy to begin with is to put up barriers so that individuals no longer want to seek asylum in the United States," Huebner added.