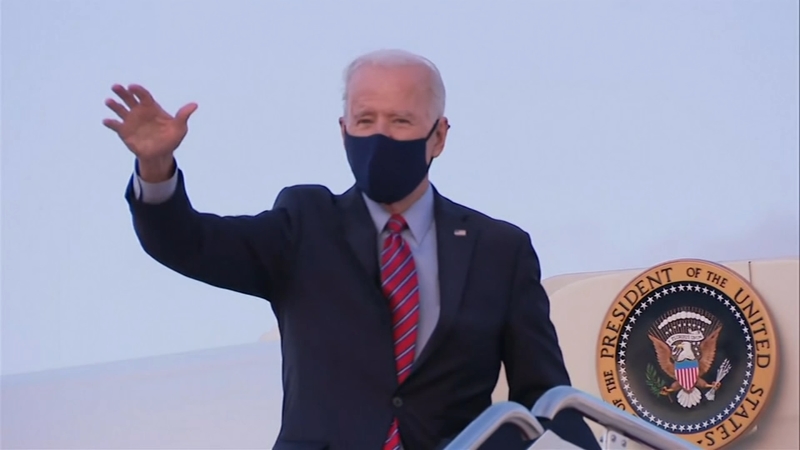 CHICAGO (WLS) -- A new federal threat assessment is raising security concerns on the eve of President Joe Biden's first speech to a Joint Session of Congress. Wednesday, it will have been 16 weeks since the United States Capitol was attacked and pillaged by violent insurrectionists. On the eve of President Biden's appearance, a threat alert from the National Capital Region Threat Intelligence Consortium is warning that similar antagonists could strike again.

Since the January 6th attack, about 400 people from almost every state -- including Illinois--have been arrested. The new federal threat assessment by U.S. intelligence bluntly predicts "those who do not accept the legitimacy of the current administration may see the JSOC as the next available flashpoint for action." The JSOC is the abbreviation for President Biden's speech Wednesday night before a joint session of Congress.

"These far-right adherents, whether they're affiliated with the group or not, are riding that wave of wave of momentum that they got from January 6th. So I think in the near future I think it's justified before the FBI and the security agencies to be aware that these groups and individuals are out there and are likely plotting things," said Kurt Braddock, Assistant Professor, American University.

Extremism expert Kurt Braddock tells the I-Team that this time there is protection such as perimeter fencing, extra police and National Guard units still deployed to the Hill. A recent University of Chicago study "The Face of American Insurrection" is cited in the threat assessment and has concluded that the majority of January 6th arrestees were not far right militia members. Rather, it says that on January 6th "'Normal' pro-Trump activists joined with the far right to form a new kind of violent mass movement"

"It's eye opening to see the kinds of effects that a charismatic leader like a Donald Trump can have on people who wouldn't otherwise engage in violence, and the result of that is what we saw that we saw on the 6th that being these kind of everyday nonaffiliated individuals teaming up with those who are more organized and have more of a hierarchical structure in their groups," Braddock told the I-Team.

Despite the ramped-up protection for President Biden's speech, federal authorities say domestic extremists show a "continued interest in targeting political figures, regardless of security measures." Among those vulnerable to attack they say are two major institutions in Washington, DC: investigators say they found "multiple threats and criminal incidents targeting media and religious institutions in the District."