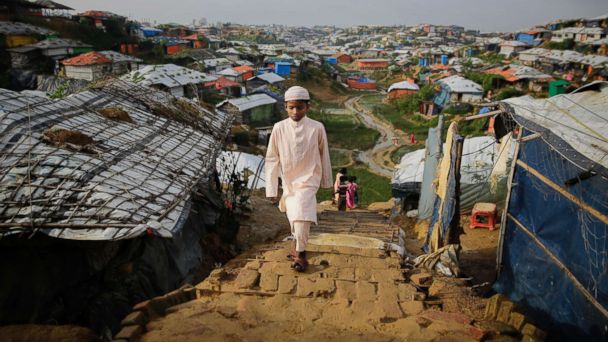 ABCNews
By CONOR FINNEGAN
The United States' top official for foreign aid issued a firm and emotional warning Thursday to Myanmar about the lack of progress over how it treats the Rohingya and other ethnic minority groups.

Two years after violent attacks by Myanmar security forces and local militias against the Muslim ethnic minority killed thousands and sent more than 750,000 across the border as refugees, little has changed on the ground in Myanmar's northwest Rakhine state. Critics say it's because the U.S., the United Nations and others have not done enough to pressure the government.

"They're not on the right path and a democratic journey, and I worry a great deal," Mark Green, administrator of the U.S. Agency for International Development, told ABC News in an interview.

Myanmar, sometimes still known by its former name Burma, has been accused of genocide by the U.N., which issued a detailed report last year on the campaign to kill, rape, and torture Rohingya, drive them from their homes, and destroy their towns and villages. U.S. Secretary of State Mike Pompeo issued a similar report by American investigators with damning, graphic details in September 2018, but the U.S. stopped short of calling it genocide and instead labeled it ethnic cleansing.

Myanmar denies it has carried out a genocide, instead saying the attacks against Rohingya were about countering terrorism.

In the last year, it has negotiated with neighboring Bangladesh to begin returning back across the border some of the nearly 1 million Rohingya refugees living in squalid conditions. But nearly none have volunteered to go, with conditions in Myanmar still dangerous and the government refusing to guarantee protections, a return to their land, or even citizenship.

"There is a strong inference of genocidal intent on the part of [Myanmar's government], there is a serious risk that genocidal actions may recur, and Myanmar is failing in its obligation to prevent genocide, to investigate genocide and to enact effective legislation criminalizing and punishing genocide," the report found.

With enormous strain on its poor local communities, Bangladesh announced Thursday it will begin to build barbed-wired fences around Rohingya refugee camps to stop their expansion, according to the Associated Press. There are also growing concerns about unrest in the camps and the potential for refugees to be radicalized or turn to criminal activity.

"It is less than satisfactory," he added diplomatically.

During this year's U.N. General Assembly, however, there was little focus on the issue, and the U.N. Security Council has never voted on a resolution on the August 2017 violence. On Tuesday, Bangladesh convened a high-level meeting with Myanmar, China, and others, and the country's prime minister Sheikh Hasina will address the General Assembly on Friday and advocate for a way forward.

It's unclear if anyone from the U.S. attended the Bangladesh event, and Pompeo did not meet his Myanmar counterpart this week -- although a senior State Department official said that was not meant as a message. President Donald Trump, Vice President Mike Pence, Pompeo, and U.S. ambassador-at-large for religious freedom Sam Brownback all did not mention the Rohingya in their addresses on the importance of religious freedom, despite the persecution of the Muslim minority for its faith.

Green declined to say whether the Trump administration needed to do more to pressure Myanmar's leadership, which is split between civilian and military power. After 23 years of military junta rule, the country began to transition to a democracy in 2011 with the first free elections in 2015, but the military still retains tremendous power. In 2016, long-time democratic activist and Nobel Peace Prize laureate Aung San Suu Kyi became the head of government, but she's been supportive of expelling the Rohingya, sparking international outcry.

"They have stopped the democratic journey," said Green. "It is not continuing as long as you have Rohingya and others who are denied their most basic rights, and so we need to be firm in that message all the time, and consistent."

The messages from Pompeo and the U.S. have been "firm and clear," he argued, but many U.S. officials are afraid of pushing too hard and provoking a backlash against civilian rule or driving Myanmar into China's orbit.

To that end, Assistant Secretary of State for Economic and Business Affairs Manisha Singh traveled to Myanmar in August to promote economic exchange, but her visit came just days after the U.N.-appointed investigative team reported that the military has deep business ties, which "substantially enhances its ability to carry out gross violations of human rights with impunity." Before the trip, human rights groups wrote Singh a letter expressing alarm that U.S. investment could "support, directly or otherwise, the military, or exacerbate conflict, and undermine efforts to promote accountability and conditions for the safe, dignified and voluntary return of displaced persons."

The U.S. announced Tuesday that it would provide an additional $127 million in assistance to Rohingya in Bangladesh and those remaining in Myanmar, as well as the local Bangladeshi communities near the refugee camps in the country's Cox's Bazar district. But "the United States cannot meet the crisis' tremendous funding needs alone," warned USAID spokesperson Pooja Jhunjhunwala.

For Green, who has traveled to Cox's Bazar and northwest Myanmar, addressing Rohingya's dire needs is emotional.

"I don't know that I have seen a greater level of despair than in the eyes of Rohingya -- young parents, near Sittwe in Burma, those who were left behind. I'll never forget this: A young Rohingya father looked me in the eyes and said, 'There are no teachers, my kids can't go to school. We don't have a mosque, so we can't worship. I'm not allowed to leave without written permission, which I never get. And the only food I've got is what you give me. What do I tell my kids?'"

Green said he had no answer to that. "How do you respond?" he said.
Report a correction or typo
Related topics:
abc newsnational
Copyright © 2020 ABC News Internet Ventures.
More Videos
From CNN Newsource affiliates
TOP STORIES