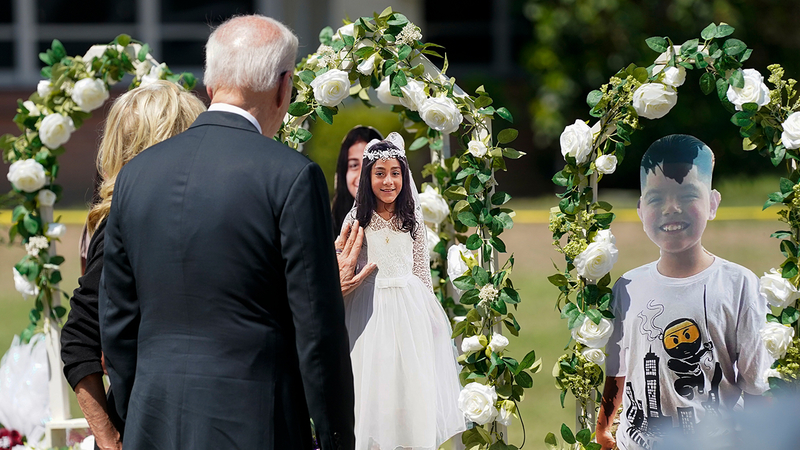 UVALDE, Texas -- President Joe Biden and first lady Jill Biden offered comfort Sunday to a city gripped by grief and anger as they paid respects at a memorial to 19 students and two teachers slain during a mass shooting at a Texas elementary school.

The visit to Uvalde was Biden's second trip in as many weeks to console a community in mourning after a staggering loss from a shooting. He traveled to Buffalo, New York, on May 17 to meet with victims' families and condemn white supremacy after a shooter espousing the racist "replacement theory" killed 10 Black people at a supermarket.

Outside Robb Elementary School, Biden stopped at a memorial of 21 white crosses - one for each of those killed - and the first lady added a bouquet of white flowers to a pile in front of the school sign. They viewed individual altars erected in memory of each student, and the first lady touched the children's photos as the couple moved along the row.

The shootings in Texas and New York and their aftermath put a fresh spotlight on the nation's entrenched divisions and its inability to forge consensus on actions to reduce gun violence.

"Evil came to that elementary school classroom in Texas, to that grocery store in New York, to far too many places where innocents have died," Biden said Saturday in a commencement address at the University of Delaware. "We have to stand stronger. We must stand stronger. We cannot outlaw tragedy, I know, but we can make America safer."

After visiting the memorial, Biden arrived for Mass at Sacred Heart Catholic Church, where some of the families of those who were killed worship. Near the church, a teacher held up a sign that said, "Mr. President, thank you for coming. I'm a teacher."

"Mr. President has a good understanding of what is happening now, here, and we are very gracious for his visit," Archbishop Gustavo Garcia-Siller said.

After church, Biden was to meet privately with family members at a community center and then with first responders at the airport before returning to Washington. He was not expected to deliver formal remarks.

Mckinzie Hinojosa, whose cousin Eliahana Torres was killed Tuesday, said she respected Biden's decision to mourn with the people of Uvalde.

"It's more than mourning," she said. "We want change. We want action. It continues to be something that happens over and over and over. A mass shooting happens. It's on the news. People cry. Then it's gone. Nobody cares. And then it happens again. And again."

"If there's anything if I could tell Joe Biden, as it is, just to respect our community while he's here, and I'm sure he will," she added. "But we need change. We need to do something about it."

Biden visited amid mounting scrutiny of the police response to the shooting. Officials revealed Friday that students and teachers repeatedly begged 911 operators for help as a police commander told more than a dozen officers to wait in a hallway. Officials said the commander believed the suspect was barricaded inside an adjoining classroom and that there was no longer an active attack.

The revelation caused more grief and raised new questions about whether lives were lost because officers did not act faster to stop the gunman, who was ultimately killed by Border Patrol tactical officers.

The Justice Department announced Sunday it will review the law enforcement response and make its findings public.

"It's easy to point fingers right now," said Ronnie Garza, a Uvalde County commissioner, on CBS' "Face the Nation," before adding, "Our community needs to focus on healing right now.'

Authorities have said the shooter legally purchased two guns not long before the school attack: an AR-style rifle on May 17 and a second rifle on May 20. He had just turned 18, permitting him to buy the weapons under federal law.

Hours after the shooting, Biden delivered an impassioned plea for additional gun control legislation, asking: "When in God's name are we going to stand up to the gun lobby? Why are we willing to live with this carnage? Why do we keep letting this happen?"

Over the years, Biden has been intimately involved in the gun control movement's most notable successes, such as the 1994 assault weapons ban, which expired in 2004, and its most troubling disappointments, including the failure to pass new legislation after the 2012 massacre at Sandy Hook Elementary School in Newtown, Connecticut.

As president, Biden has tried to chip away at gun violence through executive orders. He faces few new options now, but executive action might be the best the president can do, given Washington's sharp divisions on gun control legislation.

In Congress, a bipartisan group of senators were in talks over the weekend to see whether they could reach even a modest comprise on gun safety legislation after a decade of mostly failed efforts.

Encouraging state "red flag" laws to keep guns out of the hands of those with mental health issues, as well as addressing school security and mental health resources are on the table, said Sen. Chris Murphy, who is leading the effort.

While there is nowhere near enough support from Republicans in Congress for broader gun safety proposals popular with the public, including a new assault weapons ban or universal background checks on gun purchases, Murphy, D-Conn., told ABC's "This Week" that these other ideas are "not insignificant."

The group will meet again this week under a 10-day deadline to strike a deal.

"There are more Republicans interested in talking about finding a path forward this time than I have ever seen since Sandy Hook," said Murphy who represented the Newtown area as a congressman at the time of the Sandy Hook shooting. "And while, in the end, I may end up being heartbroken, I am at the table in a more significant way right now with Republicans and Democrats than ever before."
Report a correction or typo
Related topics:
societydeadly shootingfatal shootingmass shootingnationaljoe bidenchildren injuriesschool shootingtexas newsjill bidentexasvigilu.s. & worlduvalde school shootingmemorial
Copyright © 2022 by The Associated Press. All Rights Reserved.
UVALDE SCHOOL SHOOTING
TX state senator sues over records related to Uvalde school shooting
Uvalde school police chief on leave after mass shooting
Uvalde City Council denies Pete Arredondo's leave of absence request
Texas top cop: Uvalde police response an 'abject failure'
TOP STORIES
3 shot in Lakeview East after Pride festivities
River North shooting leaves 2 wounded
25 shot, 5 killed, including baby, in Chicago weekend violence
Target, Walmart weigh paying you not to bring back unwanted items
At least 6 injured after struck by vehicle on Northwest Side: CFD
3 stabbed in fight in Lakeview East
Father, daughter duo wanted in Girl Scout cookie scam, police say
Show More
At least 6 dead, 200 injured after stands collapse during bullfight
US basketball star Brittney Griner due in Russian court
ABC7 says farewell to Stacey Baca after 20 years
Bolingbrook suspect held on $5M bond after deadly WeatherTech shooting
ABC7 awarded Simon Wiesenthal Center's Community Service Award
More TOP STORIES News