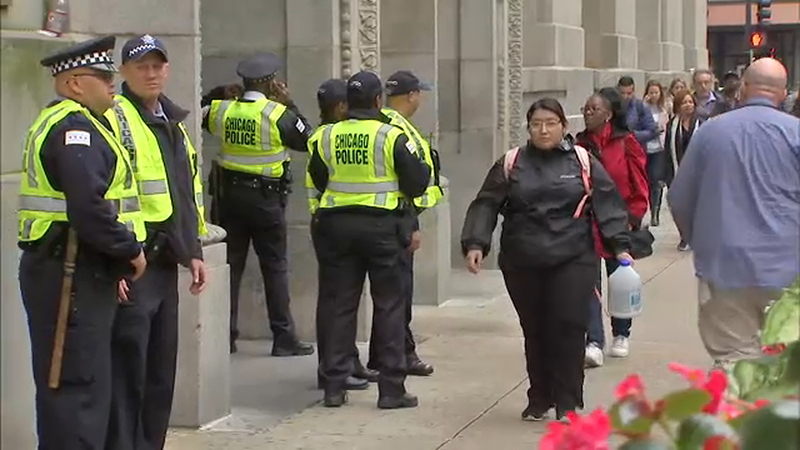 CHICAGO (WLS) -- Chicago Police Officer Jason Van Dyke was found guilty of second-degree murder and 16 counts of aggravated battery with a firearm in the shooting death of Laquan McDonald.

After jurors said they had reached a verdict, around 12:45 p.m. Friday, many people working in Chicago's Loop were either told to go home or chose to leave early.

Van Dyke was on trial for the 2014 murder of 17-year-old Laquan McDonald. Dashcam video released in 2015 shows the white officer shot the black teen 16 times. Van Dyke was charged with first-degree murder, police misconduct and 16 counts of aggravated battery with a firearm - one count for each shot. He was found not guilty of official misconduct.

Protesters who were outside the Cook County courthouse at 26th and California said they planned to head to City Hall after the verdict was read. The demonstrations planned for the Loop had the potential to draw massive crowds.

Ald. Ricardo Munoz (22nd Ward), told ABC7 Eyewitness News that he was in a meeting when news of the verdict broke, and they were told to leave. Only emergency personnel and security stayed behind.

Munoz said in his 25 years as a Chicago alderman, this is the first time he's witnessed something like this.

"Not in my 25 years. We've had these manifestations in jubilance - Hawks, Cubs, Sox, Wolves - but never with this sort of anger or potential for violence," Munoz said.

Chicago police worked extended hours Friday, gearing up for any outcome. They gathered outside City Hall

DePaul University canceled classes at its downtown campus at 1:30 p.m., in advance of the verdict. The Lincoln Park campus remained open. Pepsi workers were sent home early. That building is located at 555 W. Monroe Street.