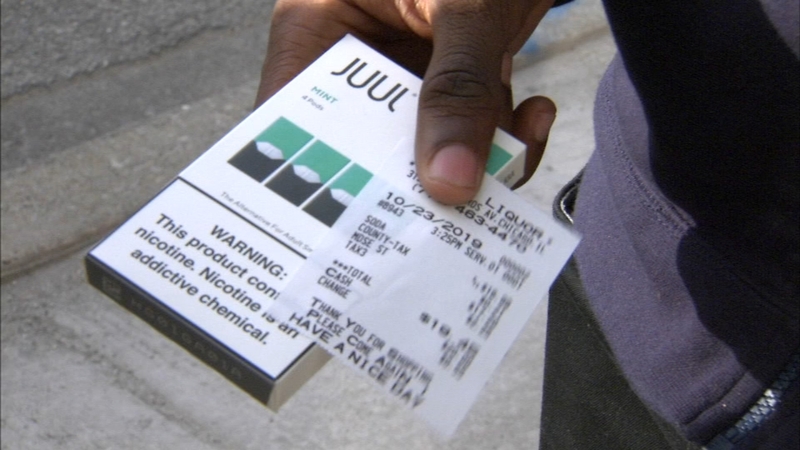 CHICAGO (WLS) -- According to the Centers for Disease Control, about 40% of patients hospitalized for vaping-related lung issues are between 18 and 24 years old. Some victims are as young as 13. The CDC says more than 2,000 people have lung injury cases related to vaping. There have been nearly 40 deaths, three in Illinois.

"We're out here to ensure that we keep these products out of the hands of our youth so that they don't begin the dangerous addiction with nicotine and tobacco products and vaping," said Adam Weller, BACP.

The young man visited area stores, attempting to buy vaping products without showing an ID. In Illinois, you must be 21 to purchase them. This student is 19.

The I-Team recently went with BACP investigators to see if stores were checking IDs. They said a BP gas station on the 3200-block of West Montrose failed when the city sent in its underage buyer. The city said he was able to buy a vaping cartridge, as an undercover BACP investigator went in and watched.

The BACP investigator witnessed the transaction then approached the sales associate.

"Here's your citation. So understand what you're getting here; it's for selling to a minor. You did not ask for an ID, You're required to ask for an ID before you sell. You failed to do that that is why we're issuing you a citation," the investigator told the attendant.

The owner then arrived, saying, "Let me go inside, please," as he entered the gas station.

"Did your employee sell to someone under 21?" Knowles asked him.

"We'll talk later," the owner replied. He then shut the gas station door and never got back to the I-Team.

So far in 2019, the BACP has issued more than 350 citations to businesses for sales to minors. The city said the compliance rate is 83 percent, similar to the compliance on the day the I-Team went with city investigators. Out of 10 stores visited, only two allegedly failed, selling to an underage buyer.

The second store that was cited, David's Food and Liquor, is across the street from the BP.

The teen held the Juul pods he just purchased along with a receipt for $19.45. BACP cited the sales person.

"Do you have anything to say about the citation for allegedly selling to someone who's under 21?" Knowles asked him.

The sales associated asked the I-Team to leave and never responded with a comment.

"There's mandatory administrative figuring to where they will attend a court hearing, to hear whether or not they're found liable, and they can face fines," said BACP's investigator.

The Illinois Department of Health told the I-Team that young adults illegally obtaining products are most affected by the vaping epidemic.

"It's overwhelmingly young people," said Ngozi O. Ezike, MD, Director of Public Health for State of Illinois. "We have in our cases here in Illinois, the 123 cases, the age range is 13 to 61. But the median age is just 22. So the majority of these people are young healthy people in their 20s and 30s who are coming down with severe life-threatening illnesses."

The American Vaping Association also discourages underage vaping. It points to the CDC's preliminary findings, showing that most cases of vaping injury or illnesses are THC-related. Just last week, an additive found in some THC vape products known as Vitamin E Acetate was identified by the CDC as a "strong culprit" in illnesses and deaths.

However, the Illinois Health Department had cartridges tested from ill vapers and only half had THC.

"For youth, we want you to understand that this is another dangerous addictive habit," said Dr. Ezike.

The two stores in this story accused of selling to the underage informant face one offense each. Their court dates are scheduled in December.

One study, in 2018, showed more than 3.6 million U.S. middle and high school students have used e-cigarettes.

MORE INFORMATION FROM THE BACP

- BACP's Tobacco Team is made up of 1 supervisor and 6 investigators empowered to enforce Chicago's tobacco regulations, including unstamped tobacco, the ban of flavored tobacco within 500-feet of a high school, and sales of tobacco to people under 21.

- The team conducts Tobacco Sales to Minors investigation daily, contracting with local students under the age of 21 to attempt purchases of tobacco at all 2,177 retail tobacco licensees.

- In 2019, through the end of September, we have conducted 2,127 Tobacco Sales to Minors investigations, issuing 358 citations for sale to minors and 108 citations for failure to post the warning sign. This is a compliance rate of 83% and total fines have reached over $500,000 in 2019.