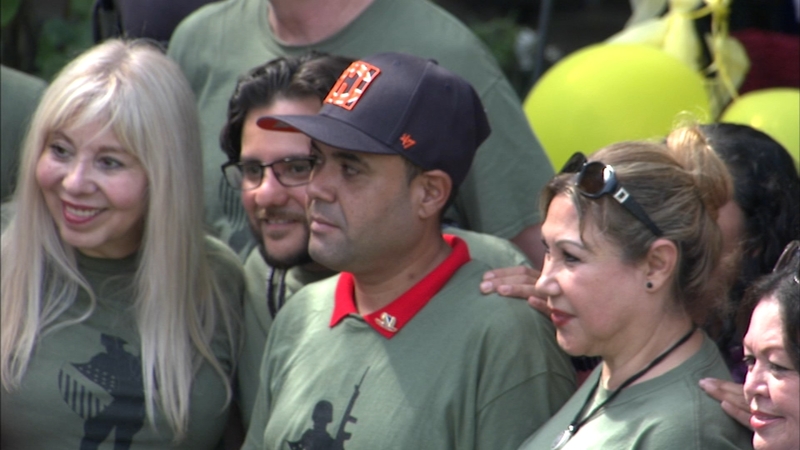 CHICAGO (WLS) -- Deported Illinois U.S. Army veteran Miguel Perez Jr. was back in Chicago Tuesday, walking the streets as a free man for the first time in a decade.

Perez crossed the border into Texas from Mexico Monday. He spoke in Chicago for the first time since his pardon by Illinois Governor JB Pritzker.

"I've been surprised but I feel so blessed," he said. "I just want to thank everybody."

Perez landed in O'Hare Tuesday morning on a two week permit that allowed him back into the country to attend a citizenship hearing scheduled for Wednesday.

His has been a long and painful journey that has garnered national headlines. The two-tour veteran of Afghanistan was deported to Mexico 18 months ago after his original citizenship petition was denied, the result of a 2010 nonviolent drug conviction for which he served more than seven and a half years in prison.

Perez's green card status was revoked as a result, and he was released from state prison into the custody of immigration officials. Then-governor Bruce Rauner denied him clemency, but a few weeks ago Governor Pritzker gave him a full pardon, allowing him to appeal his case and return home to his parents and two children in Chicago.

Perez came to Chicago with his family as a child. He served in the U.S. Army Special Forces, deployed to Afghanistan twice in the wake of the September 11 attacks.

He returned a changed man, suffering from severe PTSD. Unable to get the help he needed, he began a slippery slope into drug addiction that ended with is arrest. And while the trauma is still there, he's hopeful this is the beginning of better things to come.

Perez's citizenship hearing is scheduled for Wednesday morning, but a decision is not expected to be rendered for at least a week.