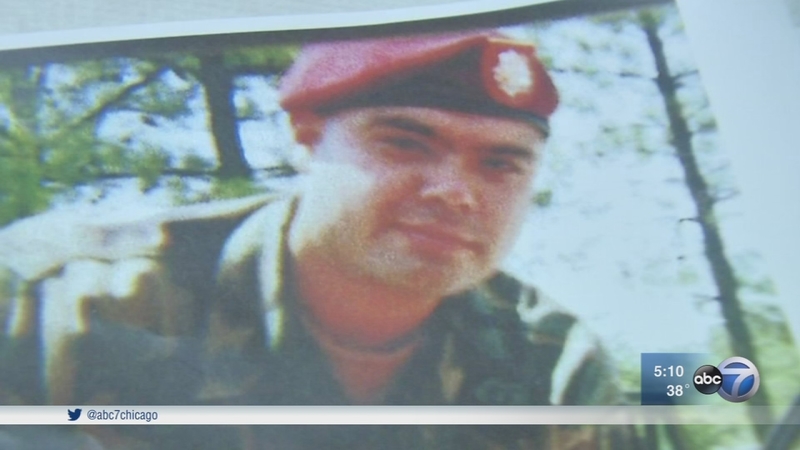 CHICAGO (WLS) -- A U.S. veteran living in Chicago is facing deportation after a drug charge.

Wednesday night, the group Familia Latina Unida asked that Miguel Perez Jr. be allowed to stay in the U.S. Lawyers for the Afghanistan war veteran asked a federal judge on Thursday to waive charges that he be deported.

Perez spent seven years in prison on drug charges. On Thursday he sat in a detention cell while his family, friends and ex-military were on hand at court to sway opinions in favor of releasing him.

The 38-year-old appeared via video conference to plead his case that his drug conviction was a result of PTSD suffered on the battlefields of Afghanistan.

As his father asked why congress is abandoning soldiers, the 38-year-son's lawyer asked for the deportation case against Perez to be thrown out. A government lawyer said Perez's 2010 state conviction for making and delivering more than two pounds of cocaine was too serious to be ignored. Perez will now seek asylum under the Convention Against Torture.

"Many people with military experience like he has are recruited at gunpoint to work for the cartels and if they refuse they are killed," Chris Bergin, an attorney, said.

That nearly happened to Cesar Manuel Lopez-Nunez, a former Marine, after he was deported in 2012.

"You are deporting the people defending your liberties and your rights. Stand by us when we need you. We made a mistake, we paid for it, treat us like any other citizen," Lopez-Nunez said.

In Afghanistan, Perez suffered a brain injury when a grenade went off beside his head. He came to America when he was eight with landed permanent resident status. After serving, he eventually found himself a bystander during the drug deal.

If an alien with military service is to be deported, ICE requires senior leadership in a field office to authorize the move and only after evaluation by local counsel.

"We are not arguing that Miguel Perez has made an error of judgement, but we are also saying that PTSD is real," said Rev. Emma Lozano.

Perez has a son and daughter who are both U.S. citizens.

The asylum hearing is scheduled for February 6.

A spokeswoman for the office of U.S. Immigration and Customs Enforcement said in a statement, "Miguel Angel Perez-Montes, 38, from Mexico, was convicted in February 2010 in Cook County, Illinois, for manufacture/delivery of more than two pounds of cocaine and sentenced to serve 15 years in the Illinois Department of Corrections. He was encountered by ICE while serving his prison sentence and placed into removal proceedings in 2012. On Sept. 23, 2016 Perez-Montes was turned over to ICE custody from the Hill Correctional Center in Galesburg, Illinois. He will remain in ICE custody while his removal proceedings are pending in federal immigration court.

ICE respects the service and sacrifice of those in military service, and is very deliberate in its review of cases involving U.S. military veterans. Any action taken by ICE that may result in the removal of an alien with military service must be authorized by the senior leadership in a field office, following an evaluation by local counsel. ICE exercises prosecutorial discretion, when appropriate, on a case-by-case basis for members of the armed forces who have honorably served our country. ICE specifically identifies service in the U.S. military as a positive factor that should be considered when deciding whether or not prosecutorial discretion should be exercised. Still, applicable law requires ICE to mandatorily detain and process for removal individuals who have been convicted of aggravated felonies as defined under the Immigration and Nationality Act."
Related topics:
deportationimmigrationveteran
Copyright © 2022 WLS-TV. All Rights Reserved.
RELATED
Army veteran faces deportation
TOP STORIES
ISP trooper, wife ID'd after found dead inside parked car: police
Bears finalizing deal to hire Ryan Poles as new GM: ESPN
Cause of death revealed for 23-year-old woman found dead after date
Finance committee rejects CPD misconduct settlement
IL reports 13,706 new COVID cases, 121 deaths
School Closings: Chicago Area Complete List
2nd NYPD officer dies days after Harlem shooting
Show More
All US states, territories remain on Chicago travel advisory
Elton John postpones Dallas tour dates due to COVID-positive test
Neil Young wants his music off Spotify due to 'vaccine misinformation'
IN lawmakers advance bill banning transgender athletes
Family continues to seek new leads in unsolved Naperville murder
More TOP STORIES News