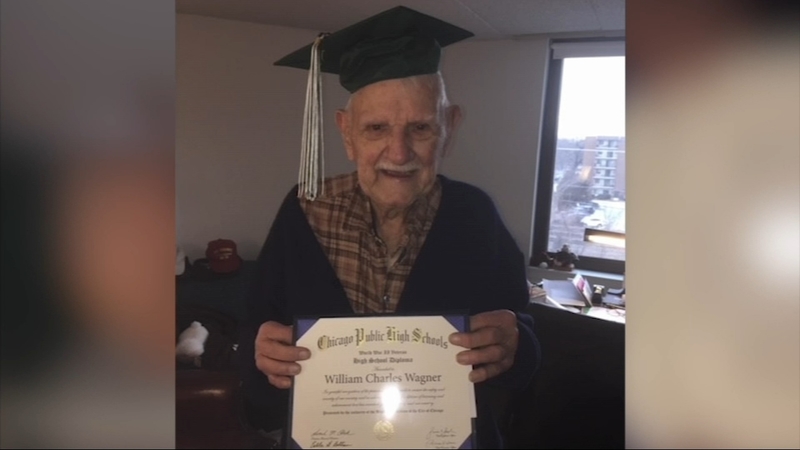 "Seventy-six years, yup. It took me that long to get my diploma," Wagner giggled, adding: "Instead of going through four years."

William C. Wagner walked in his graduation tonight, 76 years after his senior year of high school was interrupted by the draft.

Wagner, now 94, said he grew up just blocks away from Chicago's stockyards on the South Side. He was wrapping up high school when he was sent to serve during World War II. He joined the Navy on June 12th, 1943, a date he can pull from memory with ease.

"I was in my last half of my senior year," he said. "They told me to take history and civics to get my diploma. I went to draft board and they said, 'Punk you got a number, you got to go.'"

Wagner served onboard the U.S.S. Yosemite, which repaired ships bombed during Pearl Harbor. He worked in the kitchen.

Because of his service, though, Wagner missed graduation day in 1944.

"How awesome is that for a young teenager to sit back and put his country before his own wants and needs," said Forrest Wagner, the veteran's son.

"What he sacrificed for me and my brothers and sisters, and then also for his country, I believe I will never be able to repay," Forrest said.

So recently, Forrest Wagner made a few phone calls, and his dad's diploma arrived in the mail in March, just a day before Wagner's 94th birthday. The diploma ended up being his birthday present.

"My birthday is March 7th.It was really great that I got my diploma. He had a cap for me and everything else," Wagner recalled.

The birthday present came complete with balloons and a wonderful father-son moment.

"It couldn't have been more perfect. It was really, reallly awesome," his son said.

Wagner is now walking across the stage at Tilden High School, officially graduating with the class of 2019, even though he's a member of the class of 1944. It's a moment that ranks high in his life.

"Pretty special day, yup. My marriage was my number one," Wagner said.