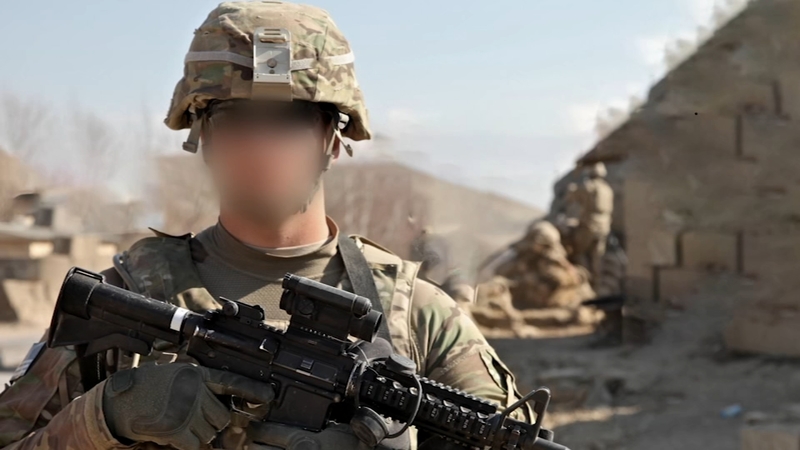 LAKE COUNTY, Ill. (WLS) -- Veterans are taking their own lives at a troubling rate, and it's one that continues to climb.

Every day, 20 veterans die by suicide across the country.

An Illinois veteran and his family want to share his story of coming very close to being part of this tragic statistic. He asked to remain unidentified because of concern about the stigma still attached to veterans who seek mental health treatment.

"There was no socializing, no emotion. It was like a shell. He was a shell," said Maria Kelley.

Kelley's son was an Army MP in Afghanistan. His forward operating base was shelled constantly.

When he returned home in 2011, he tried going to college, but it didn't fit.

Increasingly angry, isolated and suffering from flashbacks, Kelley's son bought a side arm.

"He thought he needed protection, so he ended up buying that weapon," Kelley said. "He said he had it next to his head a couple times."

Kelley's son didn't pull the trigger, and it's in large part because of Opie, a rescue dog that he bought months earlier.

He would later tell his parents that if he'd taken his own life, Opie would have been abandoned again and he couldn't have that. But he remained in a downward spiral, staying up all night and seldom straying from his room.

He was manic, talking in riddles and eventually diagnosed with post-traumatic stress disorder.

His parents were frantic, and Kelley eventually called the Lake County Veterans and Family Services Foundation.

"They were able to get us in to see somebody the very next day and it was that person - the doctor at the Veterans and Family Services - who said to us, 'He needs help and he needs it now,' because we weren't sure what to do," Kelley said.

Paul Baffico is a Vietnam combat veteran who founded the organization.

"We know the buttons to push in our locale to get you immediate help," Baffico said.

The foundation works closely with the U.S. Department of Veteran Affairs, but they're mindful that many veterans are distrustful of the agency or frustrated by red tape. So the foundation, which is made up of veterans, helps those at wit's end navigate the system.

"If we can impart a little bit of hope through trust and connection and listening, we're kind of on our way to help," Baffico said.

It has been a long and agonizing ordeal for Kelley, her husband and their son, but his recognition that he needed treatment was critical in turning the corner.

After many months of treatment through the VA, Kelley said her son is doing much better. It's a testament to the undying love of a mother and father, who have a message for others caught in a dark place.

"My message to them is, don't give up on your kid. Do whatever education you need. Try to stay involved in their care," Kelley said. "Whatever is out there. Take advantage of it, and network as much as you can because you're going to find out, you're not alone."

Kelley's son is no longer on any medication.

He said he's focused on the future.

But there are harsh realities to the big picture of veteran suicide.

The majority of veterans who take their own lives were never in combat. Many are without any form of family support and some won't acknowledge they need help.

They may not know they're eligible for treatment. If they do, they might not trust the VA to give it.

Happy endings are elusive, but they're possible and there's no better example of that than the perseverance of Kelley's family.

There are numerous support groups in the Chicago area that share the mission of helping veterans cope with mental and emotional health needs.

The Lake County Veterans and Family Services Foundation is located in Grayslake.

For more information, you can visit the foundation's website here: https://www.lakevetsfound.org/. You can also reach them by phone at 847-986-4622.

Bravehearts uses equine therapy to help veterans. The organization is located in Harvard and Poplar Grove.

For more information, you can visit Bravehearts' website here: https://braveheartsriding.org/. You can also reach them by phone at 815-943-8826.