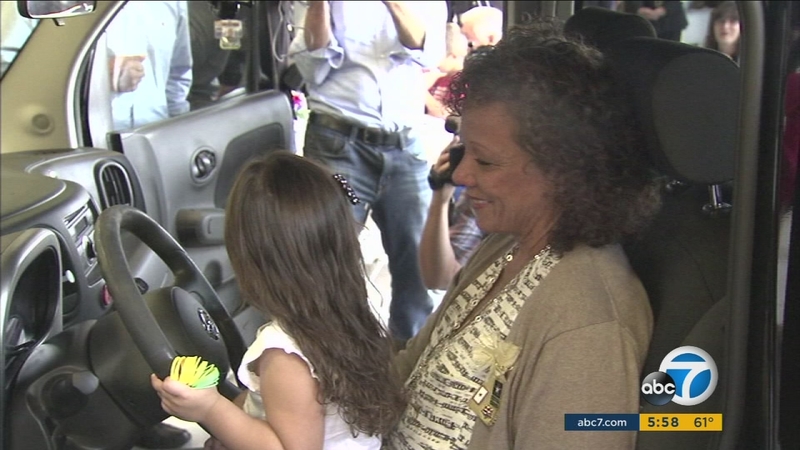 HUNTINGTON BEACH, Calif. -- Candida Torre sits with friends inside a helicopter hangar at what she thinks is a Veterans Day ceremony in Huntington Beach.

She knows the speaker at the podium: Officer John Baggs. They met last June when he responded to a traffic accident at Yorktown Avenue and Bushard Street in Huntington Beach. She had totaled her black 2009 Nissan Cube.

"(She) kind of had her head in her hands. She was pretty upset," recalled the 16-year veteran of the Huntington Beach Police Department.

The officer noticed the military ID tags around her neck and the Gold Star license plate, signifying a military family member was killed in the line of duty.

He would soon learn the Cube was her son's first new car, bought with his combat pay. She drove it as a way to remember him.

"I said, 'You know what, I totally understand, I'm a Gold Star member,'" said Baggs.

His father, John Baggs Jr., served in the Air Force -- two tours in Vietnam. He died on Veterans Day 1976, leaving behind his wife and four boys.

"She looked at me and said, 'I'm so sorry for your loss,'" said Baggs. "That's something that always stuck in my mind as the days went by."

The officer contacted Torre's insurance provider, AAA. He wanted to buy the car to have it repaired. The Auto Club, instead, donated it to him.

Caliber Collision, through its charity program called "Recycled Rides," took on the rebuild. Nearly 30 technicians with Caliber Collision donated 120 hours of their time to fix the vehicle.

"With a heavy heart and with great honor," Baggs said choking back tears. "Mrs. Torre, here's the keys to your son's car."

An eight-week labor of love was revealed before about 100 people, including Torre's family from out of state who traveled to Orange County to surprise her.

Torre cried as they drove in her son's shiny vehicle, now fully restored.

"It means a lot to have it back. It really does," Torre said. "It's nice to know there are people in the world that have good hearts that are willing to pay it forward."