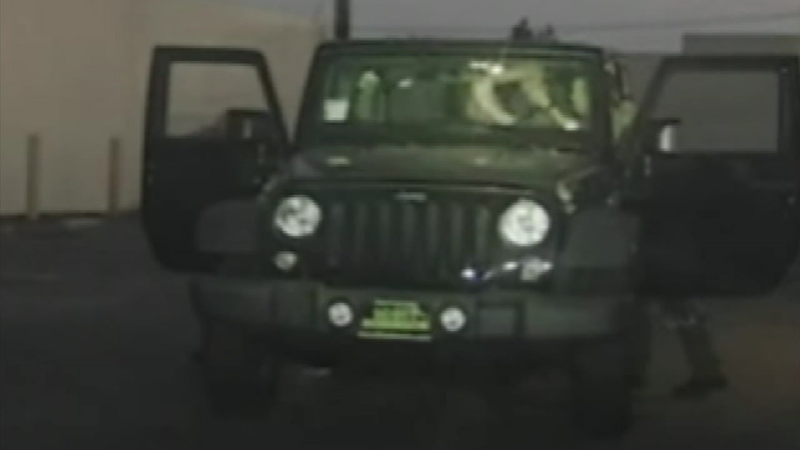 The Aug. 19 encounter was caught on an Orange County Sheriff's Department dashcam, which was obtained by Eyewitness News.

Deputy Michael Devitt finds 33-year-old Mohamed Sayem passed out in his vehicle outside a bar in Stanton. Deputy Eric Ota arrives shortly after, and Devitt asks an intoxicated Sayem for ID numerous times. After several minutes, Sayem's foot is seen out of the vehicle. Devitt warns him.

"Don't get out of the car now," the deputy says.

"Don't touch me like that," Sayem says before the scuffle begins.

Sayem's right hand clings to the steering wheel until Devitt punches him in the face. Devitt appears to land several punches, even after Sayem's already dropped to the ground.

Once handcuffed and face down, you can hear Sayem say, "Are you going to shoot me?"

That reference was left out of their police reports.

"What I see is an officer violently beating my client and no justification for it," Sanders told Eyewitness News.

In the video, Devitt tells his supervisor Sgt. Christopher Hibbs that he pulled Sayem out of the vehicle to handcuff him, but Sanders says Devitt's story involving the suspect changes.

"He's way taller than me, and he just comes up on me, essentially he almost hugs on me, so I just punched him in the face like probably like around three or four times," Devitt is heard saying.

"Devitt tells Hibbs that it was a bear hug that he was approached with and that's why he had to use the force - not true," Sanders said. "He changes that story and says, 'Actually, my client is pulling on the vest' - also not true - makes it up so he can justify the force."

Sanders alleges Ota and Devitt falsified their police reports to justify a felony charge of resisting a police officer, and Hibbs signed off on it allegedly knowing Devitt had changed his story.

Sanders said the deputies don't realize they're being recording as they talk about two other recent fights. Sanders said that once the other deputies realize Hibb's device is recording, another deputy shuts it off.

The sheriff's department said a review of the full video shows the deputy made every attempt to de-escalate the situation.

A statement by the department said in part: "The deputy used force appropriate for the situation to gain control of an uncooperative, assaultive and intoxicated person. Every use of force by a deputy is reviewed to ensure it's consistent with Department policy and procedure. The deputy's report is consistent with the video in its entirety."