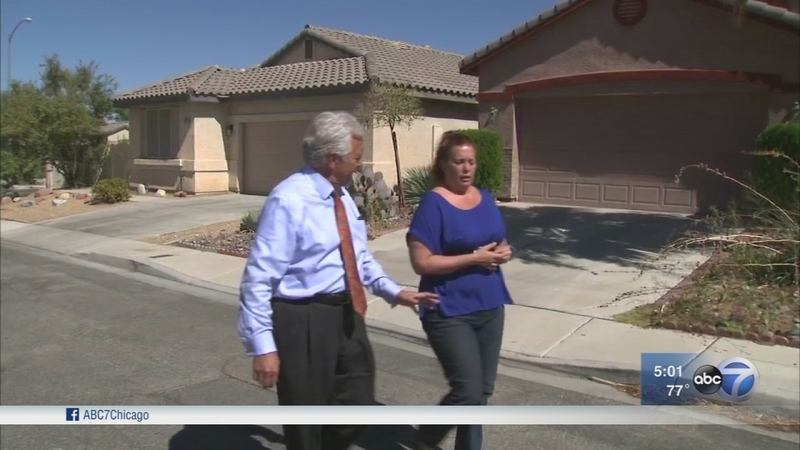 LAS VEGAS (WLS) -- A motive is still unknown in the Las Vegas mass shooting. The death toll is 59, not including the shooter, in Sunday night's country concert massacre. More than 500 people were still in the hospital Tuesday morning.

The FBI combed through security cameras Tuesday, trying to get a better idea of Stephen Paddock's plan.

New video also shows a first look inside the hotel room he stayed in, from someone who stayed there a year ago.

"He was a sick man, a demented man. A lot of problems, I guess. We're looking into him very, very seriously, but we're dealing with a very, very sick individual," Trump said.

Stephen Paddock, 64, was armed to the teeth when he checked into a suite at the Mandalay Bay Hotel and Casino last Thursday. Authorities said he had an arsenal of rifles, handguns and thousands of rounds of ammo in 10 suitcases.

Now the first video of Paddock's suite-turned-sniper perch has emerged. After the rampage began from the 32nd floor security teams arrived outside Paddock's door, and he opened fire from the inside. They called for backup and when a police SWAT team finally arrived officers breached the room and found dead, apparently having killed himself.

Some of his weapons are visible in the video. Paddock had rigged the firepower on platforms, and some guns had scopes to focus on targets.

Monday night federal SWAT officers in armored vehicles and a bomb-detecting robot searched for evidence at a home owned by Paddock in Reno. They first cleared the house for potential dangers and then FBI teams moved in to process the scene.

The investigation leads back to the Las Vegas Strip. Authorities still had a wide area around the Mandalay Bay Hotel and Casino blocked off Tuesday.

On sidewalks around the concert venue there are trails of blood droplets from those furious moments Sunday night, still marking a path away from the danger.

In the middle of all this, stories of heroism continue to emerge from the chaos.

"He said, 'Look, you're shot. I need to help you.' I said, 'OK.' He dropped the tailgate on some random truck and threw me in there. I was bleeding all over it. He took my belt, tied off my leg and kept me from bleeding out. I would have died," one victim said of his savior.

The number of wounded survivors stands at more than 525. Undoubtedly, the number of dead would be higher, had courageous bystanders not stepped up to help.

"I jumped to my friend. She would have got hit in the back, but I put my arm over her and got shot in the arm. I'm glad I did," another victim said.

Loved ones arrived at the Las Vegas Convention Center for information on missing relatives and consolation for loved ones lost.

The kill zone in front of Mandalay Bay Hotel and Casino and the music festival grounds is still scattered with bullets. The investigation remains open and active.

"I can't get into the mind of a psychopath at this point," Clark County Sheriff Joseph Lombardo said.

Sheriff's investigators and federal authorities who are assisting Tuesday will examine the Mandalay Bay security video to determine how he got the high-powered weapons to his room, firing thousands of rounds from 500 yards away and 32 stories up.

ABC News obtained video Tuesday that shows the view from the "sniper's nest." Jeff Bridges, a North Carolina man who said he stayed in that exact room while on vacation a year ago, shot the video.

"The best view of the suite - given the fact that it's almost 1,800 square feet - it's the views," Bridges said in the video.

Another video shows the outside of the 32nd-floor hotel room. The door was busted and covered with police tape.

None of this, though, seems to go to the heart of the question nagging loved ones of the dead and wounded and anyone following the case: Why did a retiree amass an arsenal of weapons and reign terror on a joyous event from on high?

The flashing electronic marquees in front of casinos and hotels in Las Vegas usually advertise things like slot-machine odds and cheap buffet dinners. Now, they push for blood donations and prayers - an in your face reminder, all day, of how things can change in an instant.

STORIES OF HEROISM EMERGE IN AFTERMATH OF MASS SHOOTING

As the investigation into the Las Vegas mass shooting continues, stories of heroism continue to emerge. Chuck Goudie talks to a heroic bartender with Chicago ties.