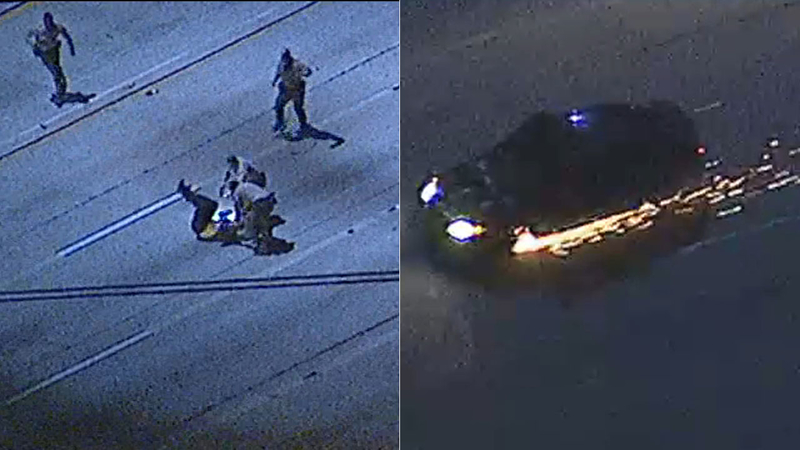 PALMDALE, Calif. -- Two suspects in a stolen vehicle led deputies on a wild chase Thursday night in California with a hood blocking the windshield and two tires blown out by spike strips.

By the end, the car was sending off sparks as it was forced to eventually slow down on the 5 Freeway in Sylmar.

The driver jumped out and tried to dodge speeding traffic on the freeway on foot before deputies were able to swarm him and take him into custody as he continued to struggle. One deputy was clipped by a car but appeared to avoid serious injury.

There were reports of gunfire being exchanged between the suspects and deputies early in the chase. After it concluded, paramedics were seen treating the passenger who appeared to have serious injuries.

A suspect in a stolen vehicle led deputies on a chase through the Palmdale area with a hood blocking the windshield and two tires blown out by spike trips.

The chase started in the Palmdale area and the suspects eventually drove through a security fence at the Palmdale airport and then got on a nearby freeway.

PURSUIT! This was one of the craziest ones I’ve ever seen. This was on the 5 SB just before it ended. driver got out, tumbled down a hill, tried to run across the freeway, was hit by a car, hurt his leg, and still took a dozen deputies to get him in custody! The video at 11 @ABC7 pic.twitter.com/12z5S7iM7m