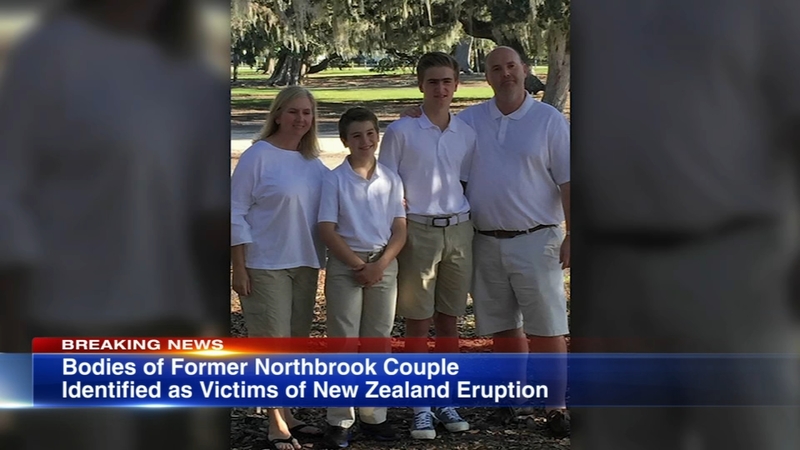 CHICAGO (WLS) -- The parents in a family with ties to Chicago have been officially identified as victims of the New Zealand volcano eruption, according to police.

"When it came that they were the ones that were missing it was pretty much unbelievable," said former neighbor Craig Carlson. "They were a wonderful family, always helpful."

Craig and Carol Carlson lived across the street from the Hollanders in Northbrook. They said the family's move to Australia had always been part of their plan.

"He had family back there and it made sense to me, as a former school teacher, to do so while the boys were young," Carol Carlson said.

In a statement, Barbara's parents said, "We are together with our family grieving the loss of our loved ones. Our amazing daughter, Barbara Hollander and our son-in-law, Martin Hollander were a wonderful couple and parents to our grandsons. We appreciate all the support."

Barbara Hollander's parents said there will be a celebration of her family's life in the Chicago area in the summer or fall of 2020.

"To see a young family like that so vibrant, and, I guess the blessing is they all went together because I understand the people that survived were severely burned," said Carol.

The official death toll from the eruption stands at 16, although authorities believe 18 people died, including several who died from their injuries in the week following the eruption in hospitals in New Zealand and Australia.

Two bodies have yet to be recovered from the White Island eruption site after land and sea searches have so far come up empty-handed. Police have said they will continue looking.

Most of the 47 people on the island at the time it erupted were tourists, including 24 Australian citizens and four more Australian residents. Ten Australians have been named among those killed.

Daily tours allow more than 10,000 people to visit every year.