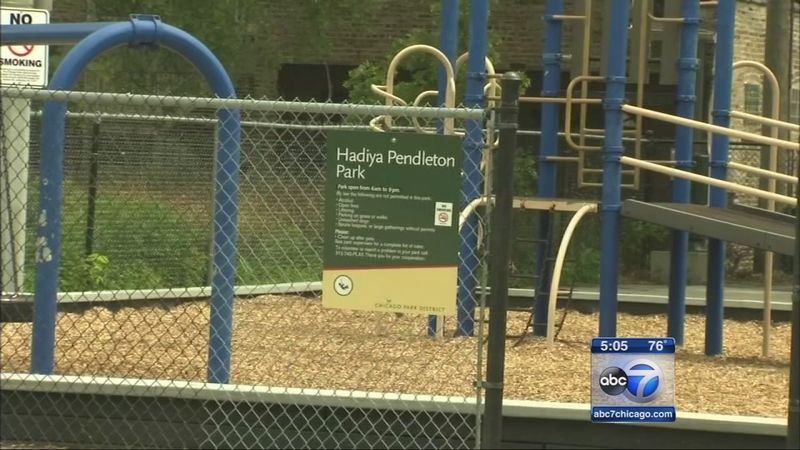 CHICAGO (WLS) -- Vonzell Banks, 17, was shot to death while playing basketball with friends at a Bronzeville park named after Hadiya Pendleton, an honors student killed in 2013.

"My heart broke. I had no words for anyone, because not only was it that some other young people had died. Again there's another association to my daughter and the fact that she's not violent," Cleo Pendleton, Hadiya's mother, said. Hadiya was 15-years old when she was shot to death at another park.

She was not the intended target. Nor was Banks, police said.

On Monday, the Hadiya Pendleton Park, located at 44th and Calumet, was empty, but Bamani Obadele was patrolling anyway.

"Any young person who wanted to be in the park, I wanted to be there for them so they know there's someone here to watch out for them. Children should not live in fear. No one should live in fear," Obadele, Grand Crossing Coalition, said.

Residents said gang members use the park more often than children do. Retired school teacher Mary Grant said she doesn't allow her grandchildren to play there. However, she hopes a planned $2 million expansion that includes adjoining empty lots will change that.

"Hopefully that will happen and that, too, would bring more adults out to the park with their children. I'm just hopeful it will get better around here," Grant said.

A prayer vigil for Banks will be held at Bronzeville Metropolitan Apostolic Church, a long-time haven for the neighborhood's youth.

"We're going to put together a conference that will take place before the end of this month to bring faith-holders together in this community to not only protest and mourn but to take positive action," Pastor Leon Finney, Metropolitan Apostolic Church, said.