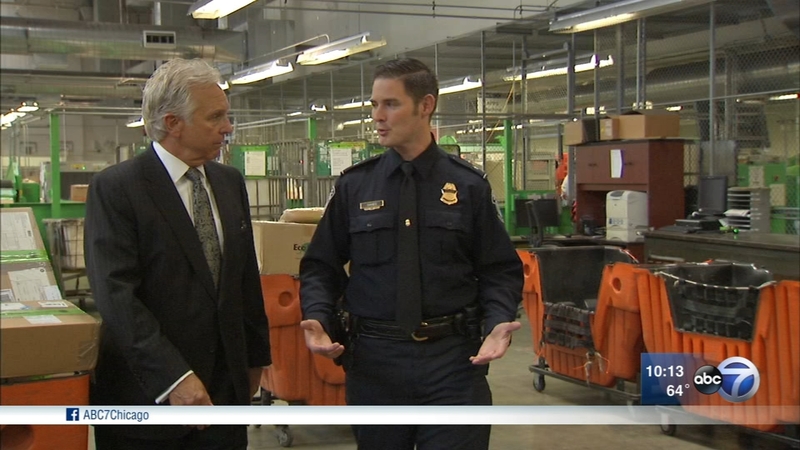 CHICAGO (WLS) -- Since the war on terror began 17 years ago, the largest U.S. law-enforcement agency has expanded both in size and in mission, serving as the nation's frontline of defense.

It's not the FBI. It is the CBP - U.S. Customs and Border Protection. The agency now has more than 60,000 officers aimed at stopping illegal and dangerous substances, cargo or people from flowing into the United States.

"It's not even a needle in a haystack, it's looking for a needle in a stack of needles," said Matthew Davies, head of U.S. Customs and Border Protection at the Port of Chicago.

While the agency states its number one mission is stopping terrorism, in a "port city" like Chicago the job is larger because this is a primary place of entry into the United States for both foreign goods and people. The goods can include explosives, weapons, counterfeit products and illicit drugs hidden in everything from toys to electronics by enterprising smugglers.

"We are looking for an all threats approach to everything, whether it's a person coming in on an airplane or a piece of cargo being sent in," Davies told the ABC7 I-Team. "We're looking for any potential threat that could be posed."

Specially trained dog teams inspect some of the estimated 44,000 overseas packages that arrive every day at CBP's facility at O'Hare International Airport. The dogs are backed by a battalion of expert human teams to identify things that may be dangerous and illegal.

Newer, advanced technology that uses a specialized laser to scan the insides of packages is also being deployed to instantly tell officers if the contents contain any number of illegal substances.

The human resources have been strained at times by CBP's more well-known mission protecting the United States' southern border. Davies said his office has been able to adjust for officers sent to the southern border with the use of overtime.