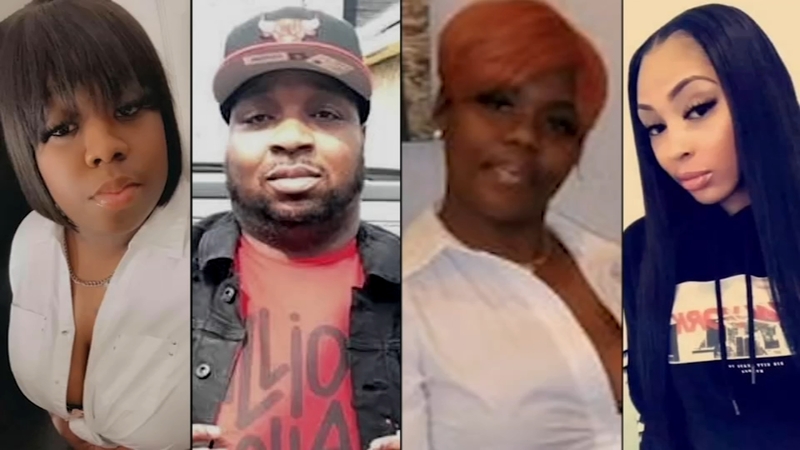 Chicago police officers responded just before 5:45 a.m. to the intersection of 62nd and Morgan streets for a reported shooting.

Chicago police said there was an argument inside a home in the 6200-block of South Morgan before the shooting took place. A party was likely being held there, police said. Neighbors said the home was a social spot and while there may have been a party the night before, in the early morning hours when the shots were heard the victims were believed to have been sleeping.

"Every time people gather, whether they are in their homes or outside, we got individuals that discharged that weapon, but who is going to talk?" community activist Andrew Holmes said. "Who is going to tell? Who is going give up the information? And again, I'm going to point the finger at the state's attorney's office. Who is going to convict these people?"

Four people were pronounced dead on the scene. The Cook County Medical Examiner identified 28-year-old Ratanya Rogers of Chicago as one of the four victims. Family members identified two other victims as Denice Mathis and Blake Lee. The medical examiner's office has not yet confirmed those identities. The fourth victim has not yet been identified.

Mathis' family said she was a loving mother of five children, who she simply adored.

"For them to just take her... take their mama away from them, that really hurts me," said Michelle B., friend.

Shermetria Williams' father said Tuesday was supposed to be her celebration, marking a major life achievement.

The 19-year-old mother didn't get the chance. Williams' family said she was one of the eight people shot. But they don't know much more than that; they came to the chaotic scene in a panic, and don't know if she survived.

"I want my sister to be here so badly," said Trent Berry, Williams' brother. "I'm still praying. I cannot picture life without her."

Four victims were taken to local hospitals for treatment.

A child was also taken to a local hospital for observation, in addition to those shot, according to CPD. Brown said a 2-year-old was in the home at the time of the shooting but was not hurt.

"We must acknowledge this for what it is -- a tragedy that's ripped apart families and inflicted intense trauma," Lightfoot said.

Lightfoot said Chicago is part of a "club of cities to which no one wants to belong: Cities with mass shootings."

Brown said there was a call for shots fired at 2 a.m. near the same residence, followed by the second call around 5:45 a.m. Police have not yet determined what happened to spark the 2 a.m. call.

Police have previously responded to the home for "disturbances," Brown said. But the street overall is a quiet one, he said.

"We've been in a pandemic for 14 months," community activist Darryl Smith said. "Now that Chicago is open, people want to see their loved ones and friends, and they want to party. And sometimes when we have these large gatherings, things happen."

People who live nearby say they've been traumatized and terrorized.

"The last 18 to 24 months it's been really like living in hell," said Arness Dancy. "You've got multiple parties, five to six days a week, starting at midnight, going to four, five, six in the morning."

A high-capacity magazine was recovered from the scene, the superintendent said.

There was no sign of forced entry, Brown said. At least one of the victims likely lived at the address, but Brown did not elaborate on the relationships of the victims and the shooter.

Brown said the victims taken to hospitals had not yet been interviewed by detectives, and the investigation still was "very preliminary."

"I can reassure the public that there will be an increased police presence in the area until we're able to identify offenders, if possible, or what, exactly, happened inside," he said.

The area where the shooting took place has been closed off, while police investigate.

This is the second mass shooting Chicago has seen in the last four days. A 29-year-old mother of three was killed in a Chatham shooting that left nine others hurt on Saturday morning.

No one was in custody later Tuesday morning. Area One detectives are investigating.

Father Pfleger is urging the community to come together to help end gun violence.