'I thought it was never going to stop;' Woman, 88, rescued after water main break floods basement in Jefferson Park 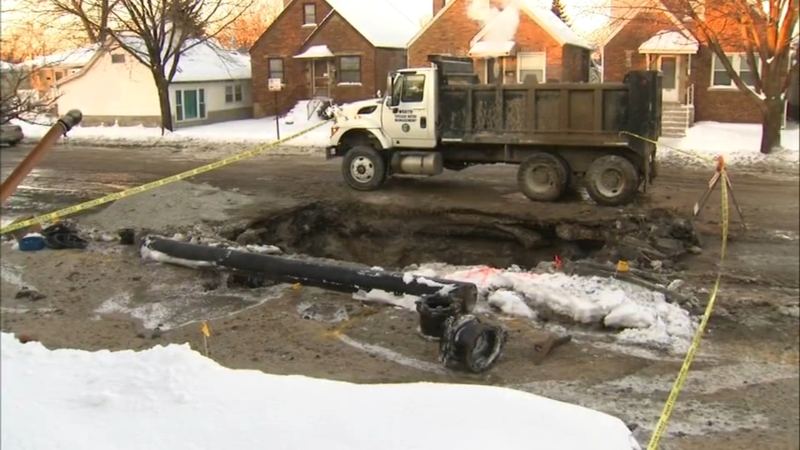 CHICAGO (WLS) -- An 88-year-old woman had to be rescued from her Jefferson Park home after a water main break left her basement with four feet of water Wednesday night.

The break occurred at about 8 p.m. in the 5400-block of North Nagle Avenue. Fillis Melone spoke exclusively with ABC7 about her rescue.

"They told me, 'Get out. Get out. Get out, you got to go,' so I grabbed clothes and stuff in a bag," she said. "The police officers said, 'she can't walk we will have to carry her.'"

Fillis said the water pressure from the 12-inch main break was so strong, it busted the door to her basement wide open.

"The police officers said she can't walk we will have to carry her," said

The entire street was covered in ice and her door is now frozen wide open.

"I was so scared, she said. "I thought it was never going to stop."

Fillis wants the city to help.

"I want my door fixed," she said.
Mayor Rahm Emanuel spoke with Fillis and said he contacted the city to alert them of the issue.

"I know this is a tremendous inconvenience for the residents and I feel horrible for them," Emanuel said.

The mayor came out to site of the main break to check in with crews working in the bitter cold to fix the issue and restore water to the area.

"They have been working around the clock through the morning getting it done," Emanuel said.

Fillis doesn't have electricity or water. She's staying with her neighbor, Rob Matula, who says the water main break on their street was anything but surprising.

"They need new water mains because this has happened numerous times on this street but this is at least the third time," Matula said.

Workers were able to remove the broken water main and replace the pipe Thursday morning, and the repairs were finished sometime after 1 p.m., according to Megan Vidis, a spokesperson for the Department of Water Management. The intersection has since reopened.