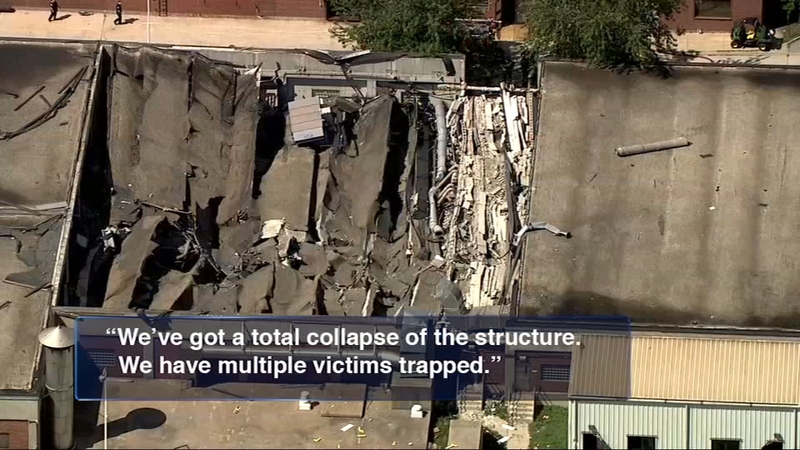 CHICAGO (WLS) -- Workers were using a torch before an explosion and collapse at a Chicago water reclamation plant on the Far South Side Thursday, the Chicago Fire Department said.

Ten people were injured in the explosion and collapse at about 11 a.m. at the Calumet Water Reclamation Plant at 430 East 130th Street. Work was being done in the building and one of the workers was using a torch and shouldn't have, fire officials said.

The explosion occurred in a room that contains a large tank that is recessed into the ground and holds sludge and they were in the process of pumping the sludge to the next building where it is broken down.

Workers were doing work on the vessel and were supposed to use an impact wrench to take apart the vessel, but the wrong tool was used and a flame subsequently ignited methane, a byproduct of the sludge, that was in the atmosphere.

CFD said the cause of the explosion was accidental and was the result of human error.

The explosion caused the roof to raise and instead of the walls blowing out, the roof went up and came back down and the supports were no longer aligned, leading to the roof collapse.

"It's a miracle that no one was killed because this type of event could have killed everyone inside," said Chicago Fire Department Spokesman Larry Langford.

Grisko is Carl Malinowski's sister. He was trapped under thousands of pounds of rubble after the collapse, entombed for two hours.

"My brother has a broken jaw, nose, collarbone, breast bone, shoulder, wrist and spinal disks, and his leg is amazingly broken," she said.

He was so severely injured he had to be airlifted out to University of Chicago Hospital. Friday afternoon he was on standby for surgery, surrounded by family after a daring rescue.

"The first individual was removed quickly, but we had a problem," said Chicago Fire Commissioner Jose Santiago. "We had another individual that was buried and entombed. The companies had to dig six feet down and then tunnel their way approximately 20 feet to the victim who was pinned by a very large beam on his legs."

"We're grateful that there's no paralysis, there's no brain damage, and that thanks to the paramedics and the people here at U of C, they believe they are able to save his leg," Grisko said. "I do want our friends and family to know that he's already given the thumbs up sign, so he's going to be alright."

Family of Bill Kissane, the worker who was trapped for 20 minutes, also expressed gratefulness to the first responders and relief that her husband survived.

"He saw a flash, I guess they must've known something was happening. He started running, he heard an explosion and he woke up, he was buried with beams," said Kathy Kissane, wife.

Friday morning, the two workers remain hospitalized, one in serious condition and one in fair condition.

OSHA has launched an investigation into the incident. Meanwhile a statement from the Calumet Water Reclamation Plant said it will thoroughly investigate this incident and work to identify measures to prevent something like this from happening again.

The Metropolitan Water Reclamation District said in a statement, "We are working with local, state and federal investigators to determine the cause of yesterday's incident while at the same time mobilizing to begin the cleanup process.

Our staff have worked diligently to ensure treatment operations continued to function as designed. There is no threat to the public and we will continue to treat water at the plant as normal.

The MWRD is extremely grateful for the tremendous effort put forth by the Chicago Fire Department and other emergency responders in extricating the two trapped workers and attending to all of the injured."