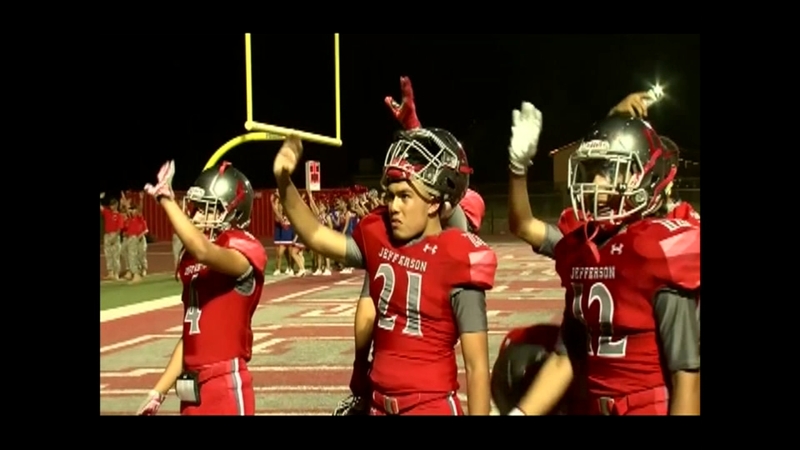 Friday night football games at a Texas high school are briefly paused during the first quarter as players, students and fans wave to young patients at the El Paso Children's Hospital across the street.

The new tradition at Jefferson High School in El Paso, Texas, is called the "Wave of Love."

"We'll pause the game for a few seconds, we make our way down to this side of the field, just to make sure they have a good view from the hospital. We just wave and let them know that we're here supporting them," Tony Martinez, Jefferson head football coach, told KVIA-TV.

It started when football fan Jesse Tovar was at El Paso Children's after his daughter was hospitalized.

Tovar said he and his friend Ed Stansbury pitched the idea to Coach Martinez.

"It's good for the community, the school and the kids in the hospital," Tovar said.

Together, they reached out to hospital officials who agreed to have all the patients in their rooms look out the windows and wave back.

"It's amazing. The kids feel like someone thought of them and they aren't forgotten," said Megan Kamau, the hospital's child life coordinator.

Kamau was on the ninth floor of the hospital during the inaugural "Wave of Love," where children were holding glow sticks so they could be seen.

"We appreciate everyone cheering this relationship on. We would really like to see it grow and we appreciate Jefferson taking this on and thinking of us," Kamau said.

Kamau said the mothers of some of the children were just as excited to see the gesture.

While football games can become competitive for the Jefferson Silver Foxes, it's not always about winning, Martinez said. Acts of kindness help build character, he said.