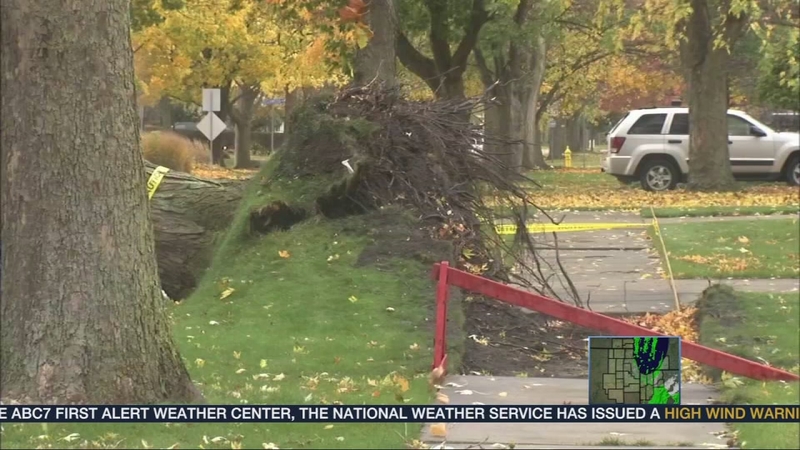 MUNSTER, Ind. (WLS) -- It will be a tough Halloween for anyone out trick or treating in Northwest Indiana. The Department of Public Works in Munster and other towns in the area have been called out to handle damage resulting from high winds, and NIPSCO says 22,000 are without power across Northwest Indiana. They say the outages are related to gusting winds coming off Lake Michigan, and that crews are out assessing damage and making repairs.

The wind in Northwest Indiana was more than a nuisance. A porch roof went airborne on Elliott Drive in Munster and became stuck in a tree as the winds blew hard around it.

"You just hang on to it," Radcliffe said. "It just rocks you everywhere."

Before the winds took over, there was snow. Heavy snow fell in Schererville early in the day. For Hoosiers, Halloween was more trick than treat.

In 1993, there was the Halloween snow was so heavy, plows were needed. While late October can bring treacherous weather, it's still a shock whenever it arrives.

Because of the cold, snow and wind, several Halloween activities in Northwest Indiana have been moved or rescheduled. The Annual Fall Harvest Festival in Gary has been moved to the Hudson and Campbell Fitness Center at 455 Massachusetts Street after a power outage at its original site, and the annual school Halloween costume parade in Munster was held indoors.