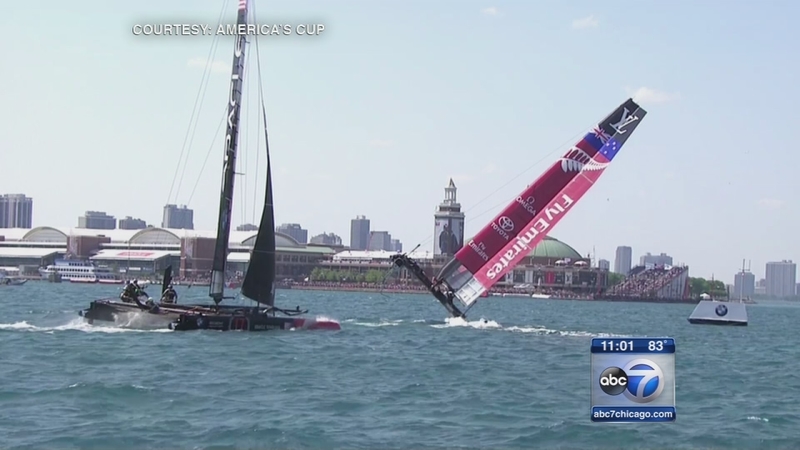 CHICAGO (WLS) -- A sizzling weekend is in store for Chicago, but events, festivals and attractions around town offer ways to beat the heat.

Chicago is hosting the America's Cup qualifying event on Lake Michigan this weekend. Mayor Rahm Emanuel said the event at Navy Pier is a chance for Chicago to shine.

"This is a wonderful opportunity not only to showcase the city, but for all of us to embrace, and given how I think the competitions go, we look forward to seeing you here back," Emanuel said.

The America's Cup is not to be confused with global soccer tournament Copa America. Argentine superstar Lionel Messi graced the Soldier Field turf Friday night as Panama took on Argentina.

Chicago's Blues Fest kicks off Friday and despite the sky-high temperatures, musicians were playing some cool tunes.

"The hotter the better!" says Fernando Jones, founder of the non-profit group Blues Kids of America. "If somebody gets hot, for example, and they don't know what to do they can hang out in the Blues Kids Pavilion here!"

Organizers expect 400,000 people to turn out for the annual music festival. They say they're aware of the weekend forecast and have set up sprinklers, as well as having paramedics on standby.

"We're going to encourage people to drink a lot of water. We have spritzing stations and cooling buses," says Janeene Brown-Mosley, coordinator for the city's Department of Cultural Affairs and Special Events.

The Illinois EPA and Illinois Partners for Clean Air has already issued an air pollution alert for Saturday, saying that due to the expected temperatures and humidity, air quality is expected to reach the "Unhealthy for Sensitive Groups" category on the national index. During the alert, residents are asked to avoid driving if possible or to restrict driving until after dark and avoid idling, and to use public transit, walking, bicycles or rideshare instead.

As temperatures climbed into the 90s Friday, North Avenue Beach filled up with people enjoying the sun. Brian Bohr is training for a triathlon and has methods for working out in this kind of weather.

Experts recommend staying hydrated and eating light meals. But that's not gonna fly at Ribfest Chicago, where a rib-eating contest ushered in the three-day festival.

When asked if it was too hot to be consuming copious amounts of pork, competitor Markella Mason said, "No, it's definitely not. Just wash it down with water and Gatorade, and you'll be okay!"
EMBED More News Videos

A sizzling weekend is in store for Chicago, but events, festivals and attractions around town offer ways to beat the heat.

But the coolest place to visit over the weekend may be Navy Pier's brand new ice rink. The engineer who built it says over 200 pipes filled with glycol are keeping the ice from melting. Inside it's like being in a refrigerator - refreshing!

It costs $10 to skate without rentals and $15 if you need skates. There is no restriction to how much time you can spend on the ice, but once you leave the rink you have to pay $10 to enter it again.