As many as 18 reports of tornadoes came in Wednesday night. The National Weather Service sent teams Thursday morning to survey damage along three separate supercell paths: Amboy to Sheridan, Troy Grove to Seneca, and Pontiac to Chatsworth.

The tornado that swept through Pontiac may have caused some of the worst damage. NWS crews said the EF-2 tornado's path stretched more 11 miles from northwest of Pontiac and through the southwest part of town. The twister packed peak wind speeds of 115-125 mph.

Dennis and Mary Leach are sorting out the damage to their home and truck; living on the northwest edge of Pontiac, their house was the first hit by the twister.

"Next thing I know, branches are coming in through the windows. Windows exploded," Dennis said.

"I think we're lucky because I think it might have built up power as it went, because we lost a shed and a bin and some damage to the house, but I think it could have been a lot worse," said Mary.

A Shell gas station located along Reynolds Street, just east of I-55, was hardest hit by the tornado. Mangled metal and wood were tossed around and some pieces shattered the windows of parked cars. The Pontiac fire chief called the station "ground zero."

Behind the Shell, a car dealership's inventory was no match for the wrath of the tornado. The shattered windows and dented doors will likely cost tens of thousands of dollars to repair. And there was more damage at another gas station, where a BP's canopy was pushed over as the twister passed through.

About three miles away, at Sterling Estates Mobile Home Park, a mobile home that was lifted off its foundation during the tornado now lays crumpled in a cornfield. Four people were inside at the time. Neighbors said they could hear them screaming for help.

"Someone was yelling at me and I come wide awake, and I jumped up and ran to the door. It was the lady across the street. She was under the trailer. The tornado flipped the trailer over on top of her," Waynette Johnson, who lives in the trailer park, said.

Rachel Baxter is now recovering from a broken pelvis and her boyfriend suffered cuts to his head.

"Next thing I know we're being flipped and banged my head on the dryer and we flipped probably six, seven times," Baxter said from her hospital bed.

Brad Gillette and his family began cleaning up the home he just finished completely remodeling a week ago, and which was one of the hardest hit on Ray Street.

"The tornado took the whole roof off. We've got water from the ceiling to the floor on all three levels. What can you do?" Gillette said.

Two other injuries were also reported. A man driving a semi dislocated his shoulder when the tornado overturned the truck, and a woman who was struck by flying glass was also taken to the hospital. Pontiac authorities said both were treated and released.

Still, the community shows a spirit of commitment to each other despite what they may have lost.

"You'll find Pontiac is a place that works together and is a great place to live," says Pontiac Mayor Robert T. Russell.

The tornado that swept through Pontiac may have caused some of the worst damage.

Another tornado, also rated EF-2 by the NWS with peak winds of 111-116 mph, caused damage in nearby Seneca. Police blocked the intersection of Main and Jackson streets to keep drivers away from downed power lines.

Homeowner Jeff Maierhofer told ABC7 Eyewitness News his farm, which dates back to the 1800's, was badly damaged in the intense storm, but his wife and children are safe. Jenna Maierhofer sheltered 10 people, nine cats and three dogs in her basement.

"My heart breaks for my husband, for my father in law, because this is their place, this is where grandpa grew up," she said.

"A man of 70 years old shouldn't be crying, but this time it did," said Jim Maierhofer.

The land has been in the Maierhofer family since 1878 and, tornado or not, here they will stay for the next generations.

"I remodeled the barn when my parents passed away, and now I'm forced to do it again," Jim said.

Seneca Deputy Fire Chief Kett Johnson said no one in the area was injured. He said weather warnings played a big role. They allowed residents enough time to prepare for the coming storm. He said it could have been a major disaster.

In Manilus Township Gayle Kline says she and her husband were caught entirely off-guard by the weather.

"We had no warning come across the frequency any place. And I was sitting in the living room and I came up and yelled at him, 'hit the basement!' and I was only halfway down the steps," she said.

After the storm, they saw the damage to their 200-year-old home.

In Marseilles, Jill Ashton and her 3-month-old baby Tripp rushed to safety as the tornado swept over their family farm. She said their ears popped but the baby slept through it all.

"As tight as I could grab him, I just ran to the basement with him in my arms," Jill Ashton said.

Her sister-in-law Julie is five months pregnant. She grabbed her 2-year-old son in the dark and took cover with the rest of the family - a total of five adults and the two little ones. Everyone is ok.

"Where the roof is missing is right over my son's bedroom. So, we are so very, very thankful God was watching out for us," Julie Ashton said.

When the storm passed, they found their family home ripped up, windows shattered, trees snapped in half and a big grain bin badly dented. A few other nearby farms were badly damaged, along with a Manlius Township storage facility. Fortunately, no one was hurt.

Video shot by a drone shows tornado damage to the Ashton family farm in Marseilles.

NWS crews determined two EF-1 tornadoes hit the Ottawa and Sheridan area. The tornadoes were on the ground for 6.7 miles and had peak winds of 90 mph. Areas of Livingston County, Chatsworth and Piper City also sustained damage.

Twisters that formed in West Brooklyn and in La Moille, which is in the Illinois Valley, were also caught on video. The NWS determined the West Brooklyn tornado was an EF-1 with peak winds of 100-110 mph. There were no reports of injuries in either of these areas.

Another EF-1 tornado hit the Cissna Park area in Iroquois County, according to the weather service. That tornado was on the ground for 3.5 miles and had peak winds of 110 mph.

Another confirmed tornado passed through Earlville, Leland and Troy Grove, which are about 50 miles west of Aurora in LaSalle County. Trees came down and homes were damaged as the rain and lightning raged. One homeowner in Earlville rushed down to his basement when he heard the storm was coming. When he came back out, he found parts of his house scattered across his property.

The NWS said an EF-0 tornado with peak wind speeds of 85mph touched down for about a mile in Mazon, Ill., in Grundy County. Another EF-1 tornado touchdown was confirmed in Troy Grove, Ill., in LaSalle County.

NWS survey teams are working to determine if any other tornadoes touched down and the preliminary ratings of those tornadoes.

In Chicago, heavy rain and lightning forced about 50,000 soccer fans to take cover at Soldier Field as the Copa America semi-final between Chile and Colombia was suspended.

Video posted to social media shows people clustered in the concourse as the rainwater poured into the stands. The match was delayed for hours before it resumed around 10:30 p.m. Wednesday. Chile won.

Drenching rain and lightning had Navy Pier closed for hours. A powerful lightning strike was caught on camera in the South Loop.

The Chicago Department of Aviation said that as of 3:50 p.m. operations were back to normal at O'Hare and Midway airports.

Many travelers were stuck at O'Hare overnight due to flight cancellations across the board. Some stranded passengers tried to sleep on the floor and on chairs, while others waited and hoped for the best.

There are no active weather alerts in the Chicago area Thursday. Isolated showers are expected. Cloudy skies will become partly sunny in the afternoon. Temperatures will be cooler than they have been this week, with highs in the 70s. 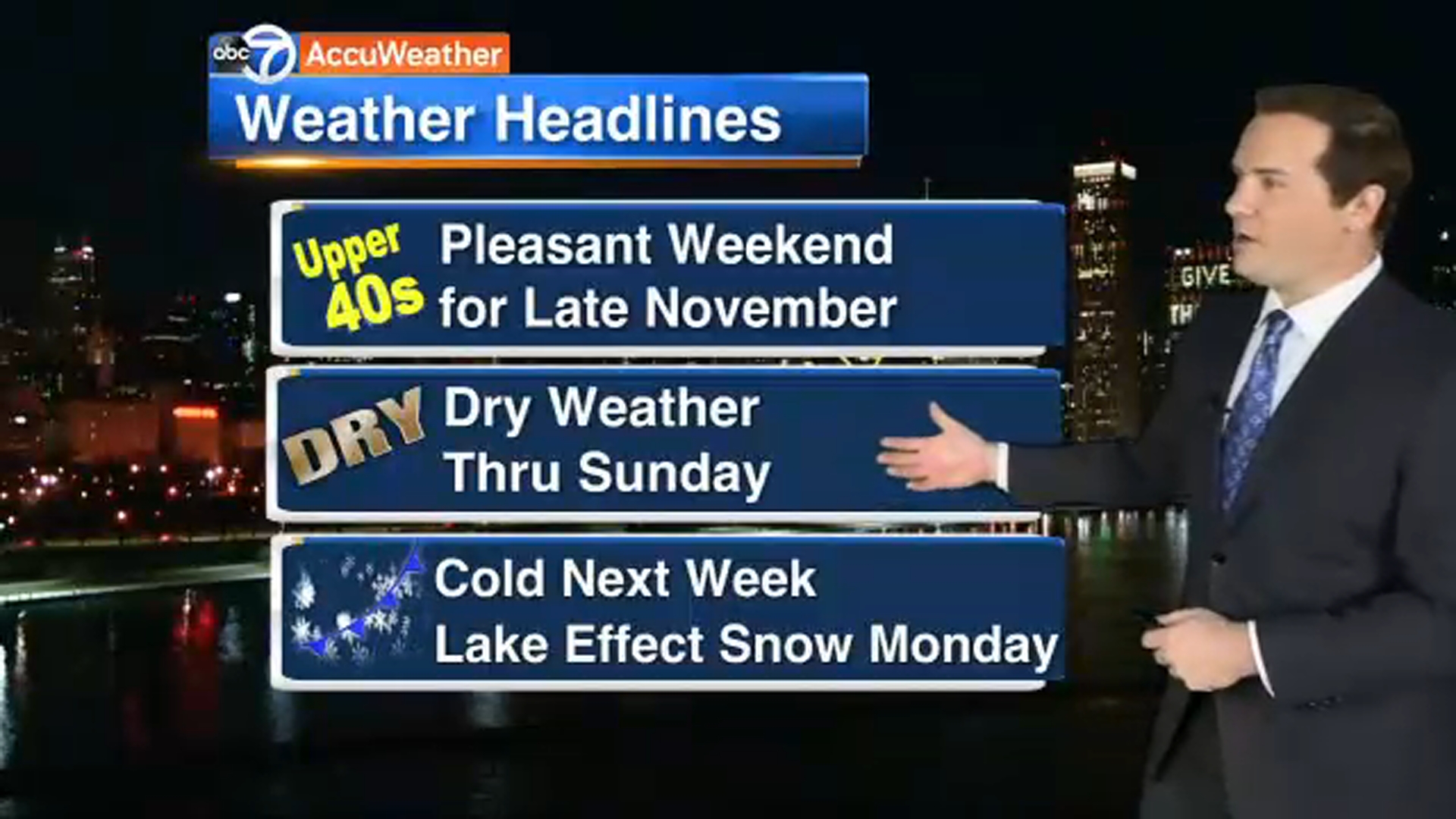 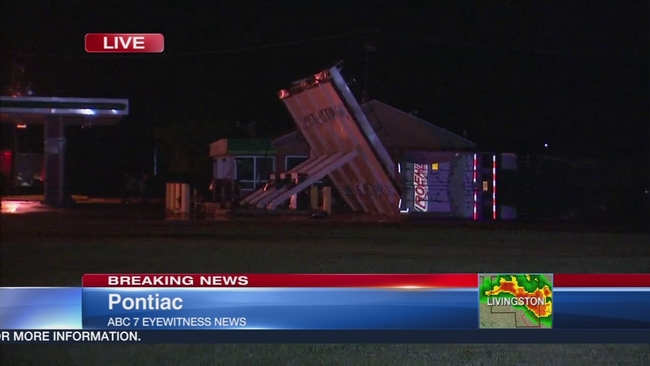 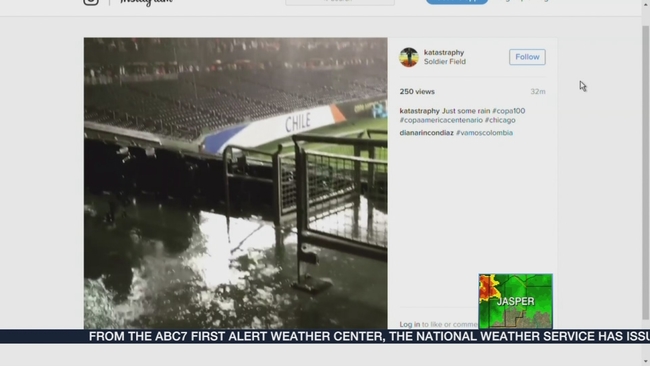 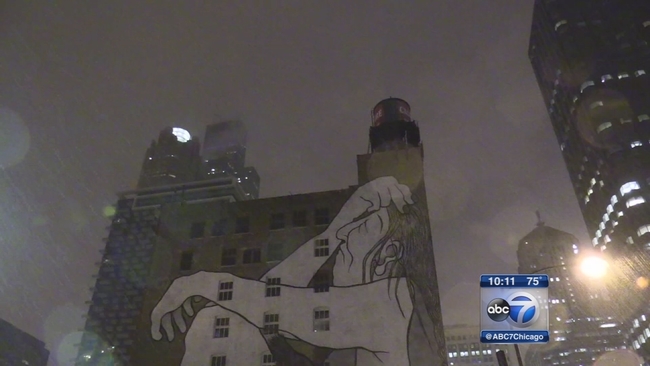