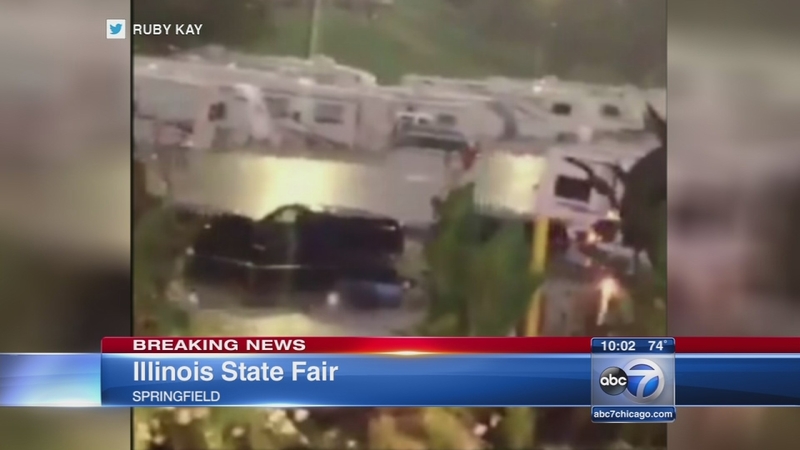 CHICAGO (WLS) -- Slow-moving storms brought heavy rain and flash flooding to parts of the Chicago area and forced the Illinois State Fair to evacuate tents and shut down early.

People ran for cover at the state fairgrounds, and video on Twitter showed the heavy rains flooded a parking lot and campground area.

Fair gates were closed to incoming traffic and attendees were told to shelter in permanent structures as a slow moving storm rolled through the area. Fair officials said the storm dumped significant rain on the fairgrounds, leading to flooded streets, buildings and barns.

Officials canceled the Grandstand concert by Pat Benatar and Melissa Etheridge and said ticketholders can get refunds from the entity through which they purchased their tickets - either the Grandstand box officer or Ticketmaster.

On the city's South Side, storms were to blame for damage to the awning at the BP Gas Station at West 43rd Street and the Dan Ryan Expressway. Heavy winds bent a portion of the awning and crews are working Friday night to clean up the damage.

The rain came down for hours in places, forcing driers to deal with high water in the northwest suburbs like Rosemont and Schiller Park.

A Flash Flood Watch is in effect for the Chicago area until midnight, the National Weather Service said.