Chicago Weather: New round of snowfall could bring 5 more inches by Sunday

WLS
By Evelyn Holmes
CHICAGO (WLS) -- The second round of an unrelenting winter storm that hit portions of the Chicago area Friday with more than 10 inches of snowfall could bring roughly 5 more inches by the end of the weekend.

Snow is expected to start after midnight. A Winter Weather Advisory will be in effect from midnight until 12 p.m. Sunday. The Chicago area is expected to receive 2 to 5 inches of snow.

Approximately half an inch of snow fell during the Saturday morning hours.

As of 8 p.m. Saturday evening, O'Hare had cancelled 107 flights and Midway had cancelled 39 flights. However, delays at both airports were less than 15 minutes, according to the Chicago Department of Aviation.

DIGGING OUT FROM THE STORM

For some this Saturday was all about shoveling. People worked hard to try to clear off their sidewalks and driveways just in time for more snow

The snowplows in Chicago are loaded up with salt and the drivers will be back at it. This as some neighborhood streets in the city remain covered with snow.

Tony Monroe decided to do the heavy lifting himself on his West Side street.

"They never come through here, since I have been living here. I haven't seen a city truck come through here. So we have to do what we got to do. We got to get out here and move it ourselves," said Tony Monroe.

Out in the suburbs, crews prepared for the expected snowfall. In Naperville, the plan was to have dozens of plow trucks on the road overnight.

"They are really great people who are dedicated to the Naperville community and just want to be out there and clearing off the road and making it safe for people," said Naperville Communications Manager Linda LaCloche.

Crews were working a 12-hour shift Saturday night and drivers were focusing on the primary roads.

"Tomorrow morning when you wake up and try to go to church, you are probably going to see snow covered roads," said LaCloche.

The second round of an unrelenting winter storm could bring roughly 5 more inches by the end of the weekend.

Many Chicago side streets and sidewalks remained covered in snow Saturday, after several days of winter weather, so some volunteers spent their weekend clearing the snow.

Chatham resident Freddie Newman is all smiles as the senior thanked strangers for shoveling the snow in front of his home.

The random act of kindness is just one of many volunteers with My Block, My Hood, My city did Saturday throughout Chicago.

With another snowstorm on the way, the founder of the not-for-profit, Jahmal Cole, put out a call to help those who can't always help themselves.

"The city can get overwhelmed pretty quickly by Mother Nature. Instead of complaining saying the city's messed up, the weather's messed up, the politicians are messed up, we're just challenging Chicagoans to do something simple on their block to help out," said Cole.

That's just what David Thompson did. A native of Nashville and recent transplant to the city is among the group that descended on this block near 76th and Cornell Avenue.

"When I saw this on social media, I don't have anything to do Saturday, so why not pay it forward," Thompson said.

The deed was appreciated by those here who sometimes can't afford to pay someone to remove the snow, which is now required under a city ordinance.

But for 12-year old North Side resident Ana Dixon and mother Jennifer, there's an even greater purpose.

"It's really a great way to help the community come together and do things for others, even when they're weren't asked to do it," said volunteer Ana Dixon.

"She's learning about sweat equity and doing for others what they can't otherwise do for themselves," said volunteer Jennifer Dixon.

"It's rare that people do things like this and to see everyone come together and do something like this, it's beautiful," said Brown.

The southwest suburbs were hardest hit by the storm. As of 5 p.m. Friday, Frankfort had seen 12.8 inches of snow, while Lemont had recorded 12 inches by 2:30 p.m. and Joliet had gotten 11.2 inches by 6 p.m., the weather service said.

Looking on the bright side, the forecast for the upcoming week calls for sunny, dry conditions after the pesky storm moves out of the area on Sunday afternoon, the weather service said. A high of 25 degrees is in the forecast Monday, with temperatures expected to push to 40 degrees on Wednesday.

Chicago Streets and Sanitation officials said they are working hard to make sure every street in the city is safe and passable. If you have a problem in your neighborhood, report it by calling 311.

Snow will develop through this late evening, and persist into Sunday. Wintry mix expected south of I-80. Expect slippery travel. pic.twitter.com/sdvjq3Q8Ia 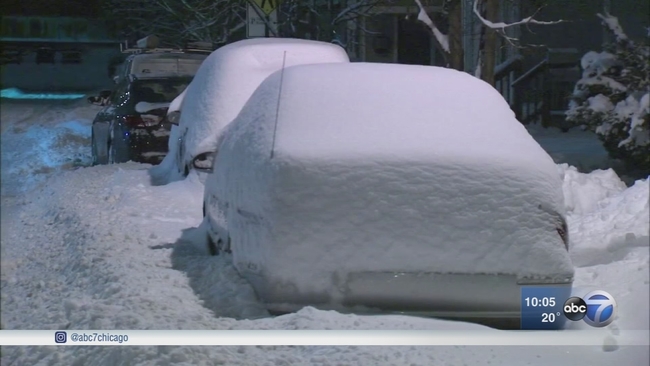 Chicago Weather: Winter storm dumps up to a foot of snow across the area
More Videos
From CNN Newsource affiliates
TOP STORIES