WLS
By Laura Podesta
CHICAGO (WLS) -- Even though the snow is over, the morning commute was slow-going Monday.

The slick roads combined with fog could make for a tricky morning commute. A multi-vehicle crash on the outbound lanes of the Jane Addams Expressway closed multiple lanes Monday morning, the Illinois Department of Transportation said. Shortly before 8 a.m., all lanes had reopened. The crash involved as many as eight vehicles, including a semi and could be blamed on the combination of construction in the area the slick road.

The ABC7 Storm Tracker checked out some residential streets in Palatine, where the roads where mostly clear, but conditions were still slick with temperatures close to freezing.

Storm Tracker made its way through stop-and-go traffic, taking 30 minutes to travel from Hoffman Estates into O'Hare.

The snow caused 17 crashes on the roadway on Sunday, according to the Illinois State Police. Three people were hospitalized after a sedan and minivan crashed in the 7700-block of West Grand Avenue at around midnight.

Snow appears to have been a factor in a crash in the Bridgeport neighborhood, where a police vehicle was involved in a multi-vehicle crash in the 1200-block of West Pershing Road. Two officers were hospitalized with non-life-threatening injuries. Four other adults were also hospitalized.

No additional snow is forecast for Monday, but there is a potential for some light snow late Wednesday and early Thursday.
Related topics:
weatherchicagomunsterjolietromeovillelislebridgeportsnow
Copyright © 2020 WLS-TV. All Rights Reserved.
RELATED 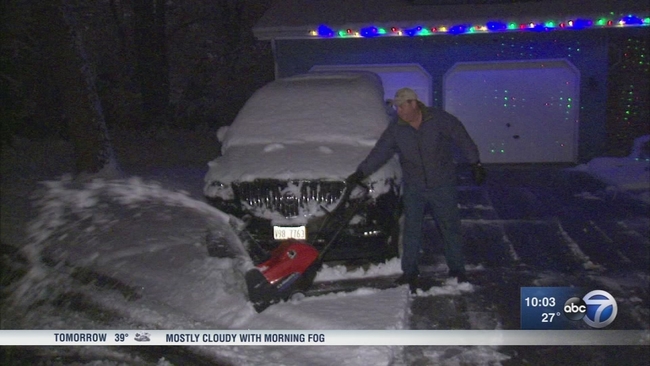