The National Weather Service said highs on Wednesday in northern Illinois ranged from -4 to 2 degrees with wind chills as low as -30 and -35 overnight. A wind chill warning was canceled as of 11 a.m., but a wind chill advisory is still in effect until 12 p.m. Thursday.

The Chicago area reached its high of 6 degrees Wednesday morning, before temperatures dropped over the course of the day. People should remain indoors when possible. In these conditions, frostbite can occur on exposed skin within minutes. Chicago-area hospitals are expecting to see more patients with cold-related injuries overnight on Wednesday.

To treat hypothermia, doctors at Rush University use a special heat warming blanket. It covers the patient and fills with warm air.

"It's pretty much a disposable plastic sheet that goes over the patient when they come in, we hook it up to an air source and it's warm air that flows through that blanket and warms slowly, all the way through," said Dr. Katie Buch.

Doctors say they also use heat lamps to warm patients up. They remind everyone to cover up to avoid getting hypothermia or frostbite, because it can set in within a matter of minutes if your skin is exposed.

Snow is expected late Thursday with accumulations between 1 and 2 inches, then the weather is expected to warm slightly over the weekend. High temperatures may reach the mid-20s and some light snow is possible. 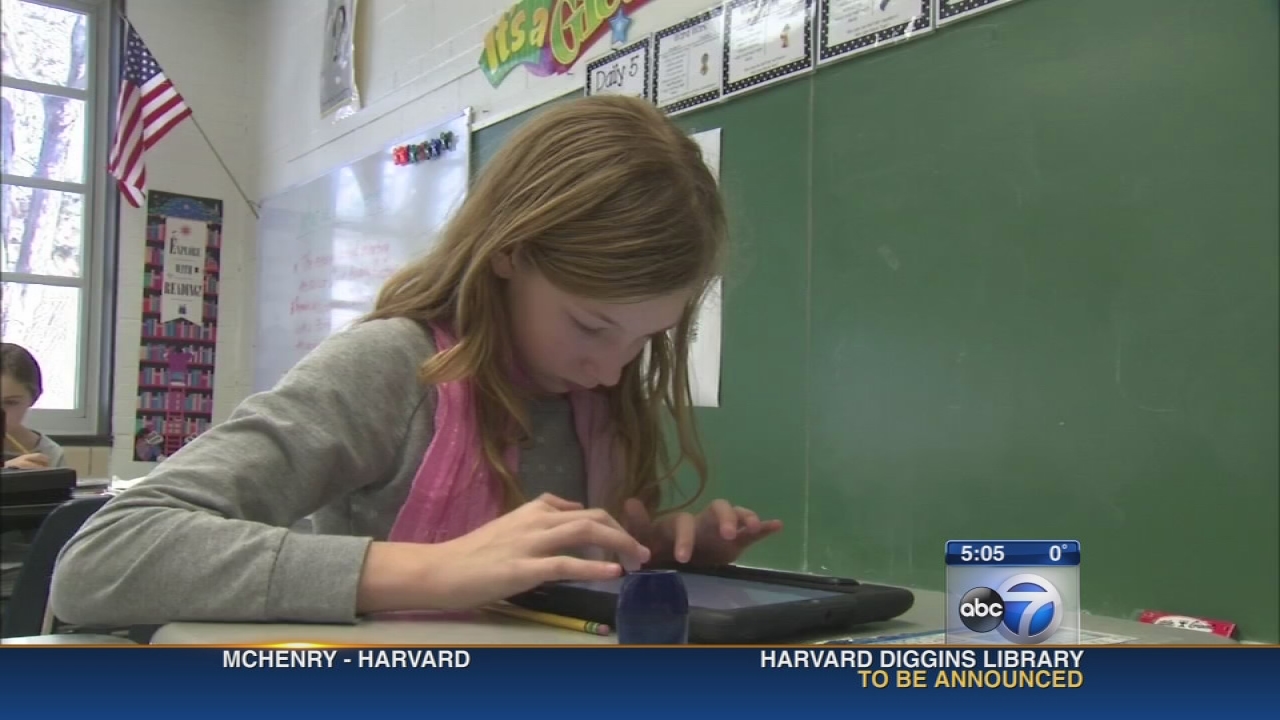 The two largest districts in Illinois - U46 in Elgin and Chicago Public Schools - are among more than 30 districts that decided to cancel classes on Wednesday due to the cold. CPS parents can check out the CPS website or call (773) 553-1000 for information.

Students who attend schools in Waukegan's District 60 were also off on Wednesday. They already lost several weeks of classes due to a teachers strike in the fall.

For a full list of school closings in the Chicago area, visit ABC7's School Closings page.

The closures left some families scrambling to find child care. Several organizations are trying to help by opening their doors to children.

"We went to the computer lab. We played in the gym. And we're doing a craft here," Sam Clark, 8, said. He's one of many school-aged kids who didn't have class on Wednesday. Clark's at the McCormick Tribune YMCA in Logan Square.

All YMCA centers in the Chicago metro are offering "School Days Out" programs, YMCAChicago.org. For $40, parents could drop kids off from 7 a.m. to 6 p.m. on Wednesday.

"It's a support system. The YMCA sees itself as a place for families to be and we want to provide that service," Stephen Vick, McCormick Tribune YMCA, said.

Six nature centers within the Cook County Forest Preserves are also open. Admission at the Shedd Aquarium and Museum of Science and Industry was also free on Wednesday for Illinois residents. Danielle Blakemore, of Romeoville, brought her four children, who range in age from 2 to 12, to the aquarium.

"It's a lot, having them all at home at once, running around," she said.

Carlos Ramirez is trying to run errands with his kids in tow.

Class was in session in suburban Lemont High School where as of 10 a.m. attendance was at 93-percent.

"We were confident in our bus company. We were assured our buses would be able to get the students her safely. And we believe it was in the best interest to have school at this time," Lemont High School Principal Eric Michaelsen said.

Some suburbs also offer warming centers. In Naperville, all of them are open.

"People do take advantage of warming shelters from time to time. Due to personal circumstances they need to keep warm and we're here for them," Sameera Luthman, Naperville Park District, said.

While it isn't recommended, some people have to be out in the brutal temperatures. Dan Wehrli. who works for a landscaping company, was out shoveling in downtown Naperville.

"We deal with it. We got to get the work done. Down here shoveling the snow off the awnings and off the sidewalk," Wehrli said.

Others, like AJ Madonia and his kids, are out sledding.

"They've got their face masks on, snow pants, covered. There's no exposed skin so I figured a few times down the sled hill before work would be alright," Madonia said.

Commuters were bundled up for the morning rush.

Metra officials prevented delays due to switching problems with gas-fed fires at crossovers and extra staff. Fuel trucks were also stationed at outlying rail yards. Metra said the cold can have a cumulative effect on equipment and trains. There are speed restrictions in place because of near-zero temperatures and dangerous wind chills.

"The worst part is when you get downtown and you have to walk over the river. The wind comes right up underneath your coat. There's nothing you can do except just grin and bear it and walk a little faster to get to work as soon as possible," said Tom Siurek, a Metra commuter. 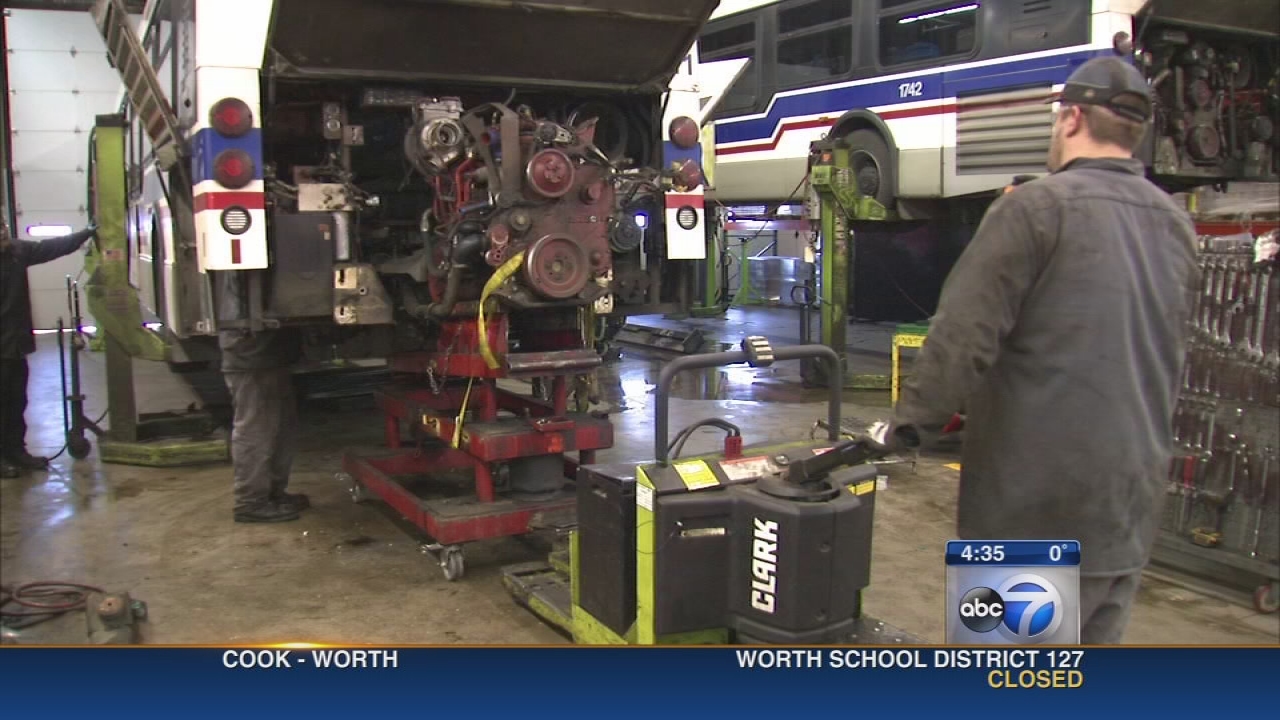 Keeping Chicago Transit Authority (CTA) buses and trains on schedule is also a challenge in the cold weather. The CTA is spending $187 million on a bus modernization program.

About half the CTA's fleet, or 1,000 buses, is undergoing the mid-life overhaul at a facility in suburban Hodgkins. After six or seven years on the streets of Chicago, they average about a quarter million city miles on the odometer. They're in need of new engines, transmissions, radiators and more.

"We're doing 60, 70 buses at a time and so basically doing this overhaul on 55-percent of the bus fleet while still maintaining service, so it is unprecedented," George Cavelle, CTA vice president, said.

The maximum life of a CTA bus is about 12 years. With so many reaching the halfway point, the massive fix-up is on a fast track.

"Coordinating all the events and the flow of when buses come in and out, they're all here at different stages, so we have to coordinate that," Eric Eldridge, GM Cummins, NPower general manager, said.

Each bus takes about two and a half days to rebuild.

Drivers also faced problems on area roadways. The Illinois Tollway activated "Zero Weather Road Patrols" to help drivers in disabled vehicles and respond to calls from the Illinois State Police. Tollway Executive Director Kristi Lafleur said drivers should stay in their vehicles rather than go for help in frigid weather.

The patrols are crew cab trucks equipped with arrow boards for directing traffic around accidents or stranded vehicles. They have enough room for five passengers if motorists need to be transported to a Tollway maintenance garage, toll plaza or Tollway oasis.

A city ordinance requires landlords to maintain certain heat levels in rental units between Sept. 15 and June 1. Temperatures should be at least 68 degrees during the day and 66 degrees at night. If a landlord does not comply, call the city at 311.

Fluctuations in the temperature can put stress on old, cast-iron pipes. To prevent residents pipes from freezing, the city said to try running a trickle of water while temperatures are so low. Wrapping blankets around exposed pipes and allowing warmer air to circulate near them are also good tips. If a pipe does freeze, never use an open flame to thaw it. Use a heating pad or hair dryer instead. If residents lose water service or see a leak from a broken main or service pipe, the city said to call 311.

The Forest Preserves of Cook County remain open on Wednesday, but officials are strongly encouraging residents to stay inside and avoid outdoor winter activities during the dangerously cold weather. Indoor activities at the preserves' six nature centers are also an option on Wednesday.

Sledding hills, snowmobiling areas and a cross-country skiing site in Lemont will be closed on Wednesday. Some parking lots have also been closed because of ice. Here's a full list:

For a list of grove closures, visit fpdcc.com under the Preserves & Trails tab. 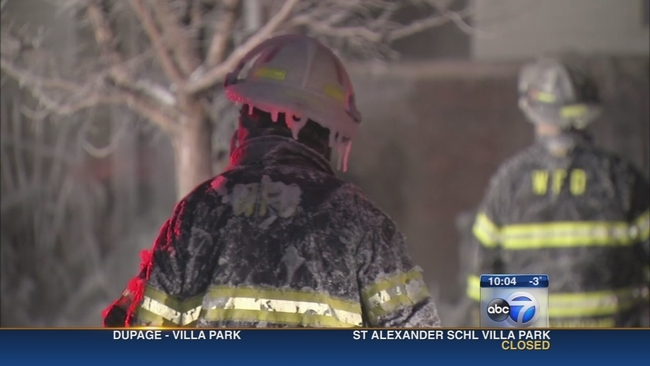 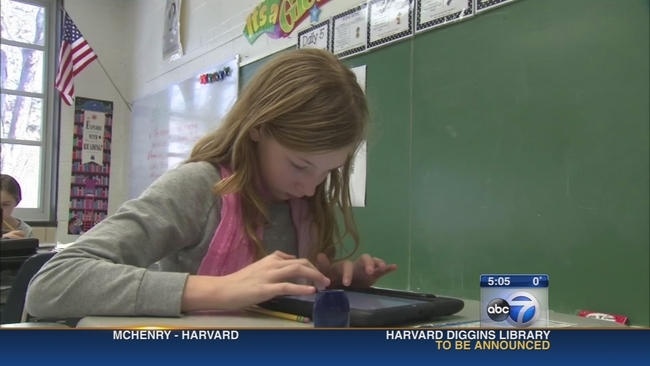 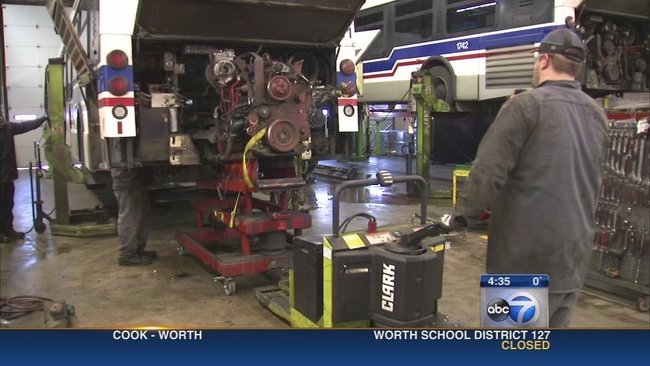 CTA modernizing half its fleet of buses in $185M overhaul