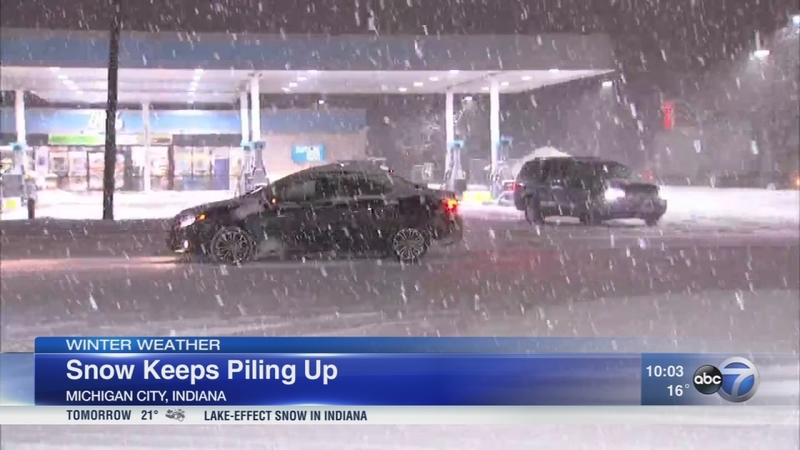 The snow made a mess of Chicago area roadways, including in northwest Indiana, where a jackknifed semi created big delays on I-94.

Indiana State Police said multiple semis and multiple cars were involved in the accident. Only one injury was reported.

Jeff Delgado was running late. He had to stop at a gas station in Skokie midway through his much longer-than-normal commute to fill up.

"Typically it's about 15, 20 minutes and it turns into about 45 minutes to an hour," he said. "Better to drive slow, be safe that's what you've gotta do."

The Edens was moving a bit better by late morning, but Wilmette resident Leticia Martinez says she is not going anywhere near an expressway in these conditions.

"In this type of weather, I'd rather take the roads the side roads," she said. "At my age, I take things slow."

But it could be worse. It was slow going on the Jane Addams tollway late Monday and early Tuesday, where it was hard to see more than a few feet in front of you. Many drivers pulled over with the hazard lights on.

Snow fell across the Chicago area all morning long, leading to crawling expressways and lots of cranky commuters.

The plows have been running almost non-stop since late Sunday evening. Drivers on the North Side of the city are hoping it lets up.

"I actually had to pull over and wipe my wind shield off because it wasn't steaming fast enough to get the snow and ice off," Wilmette driver Veronica Price.

Her 1-year-old dog Bobby was ready for anything, suited up in his best foul weather gear.

"He thinks he's a lot bigger than he is," Price said.

She was glad she missed the crazy commute Tuesday morning, but she has to work later Tuesday night.

"I pray too because sometimes it can get slick so just careful, right," she said.

Moral of the story: Stay safe and drive slow and be sure to budget a little extra time when you're heading out Tuesday.
Report a correction or typo
Related topics:
weatherchicagoillinoisindianawisconsinwilmetteskokiecoldsnowwinter weather
Copyright © 2021 WLS-TV. All Rights Reserved.
More Videos
From CNN Newsource affiliates
TOP STORIES