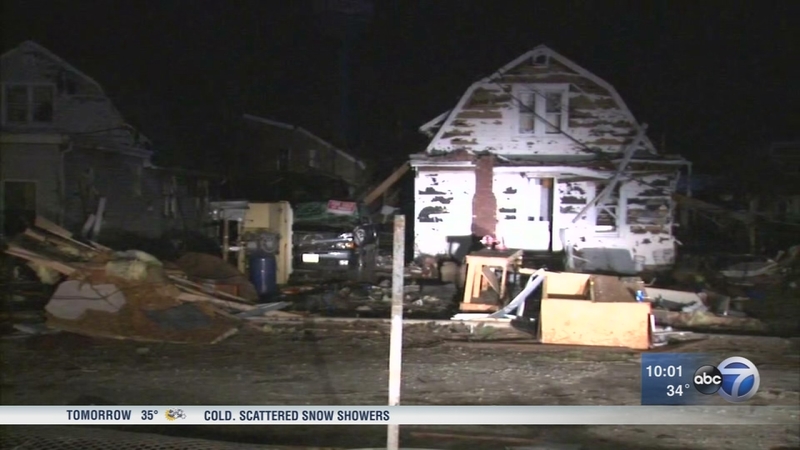 CHICAGO (WLS) -- The sunrise Wednesday gave Illinois residents in Ottawa and Naplate a better look at damage caused by a deadly storm.

EF-3 tornadoes generally have winds over 135 miles per hour.

A 76-year-old man is being remembered as a kind man and a good neighbor after he was killed by a falling tree as a tornado hit Ottawa Tuesday night.

Three people were killed in Illinois Tuesday. Officials said a man killed in Ottawa was identified as Wayne Tuntland, 76, of Ottawa died of "crushing injuries" from a fallen tree in the 400 block of State Street.

"It looks like he was outside in the process of moving some debris in his backyard, along with another individual. A family member went outside to notify them that a storm was approaching and it looks like they were in the process of returning to the home and unfortunately the tree came down on them," said Rich Ploch, La Salle County Deputy Coroner.

"Really nice guy, very giving person. Always spoke when we saw each other over the fence," said his neighbor Cindy Urbanik.

Two people were taken to OSF Saint Francis in Peoria, Ill., in critical condition. One patient was was listed in good condition. The Ottawa Times said Wednesday night that the second man, 31-year-old David Johnson, died Wednesday afternoon according to the Peoria County Coroner's Office. The Times said Johnson was Tuntland's son-in-law who was injured by the same tree that crushed him.

One person was killed and another critically injured when a tree fell on them as tornadoes hit Ottawa, Ill., Tuesday evening.

Uprooted trees, downed wires, blown out windows, falling chimneys and missing roofs were all over one of Ottawa's neighborhood, as residents set out to clean up the storm damage.

"We were in the basement, the side of the house kinda came in so we knew we were in some bad luck here, but we did not figure we lost the roof and everything," Debra Kozsdiy said.

The entire roof and attic were blown off the Kosdiy family home, and they think an angel - found landed upright in the destruction - and their shamrocks kept them alive. But despite all the damage, the family has managed to keep their sense of humor.

"My curtain is hanging in their tree over there, so that's kind of comical in itself. I told them I wanted it back, by the way," Debra said.

In southern Illinois, Thomas McCord, 71, was in front of his home at 1529 County Rd. 1800 North in Crossville when the tornado hit, said White County Coroner Chris Marsh. Authorities found him about 70 yards away in the field behind his home. He suffered blunt force trauma. McCord's wife was inside the house and also injured, Marsh said. She was taken to a hospital, where she was treated and released. Crossville is a village of 745 people that sits near the Indiana state line.

More than a dozen other people were seen by hospital officials after the twister hit, around 5 p.m. Tuesday. City officials said in a release Wednesday that residents who registered for text message alerts through Nixle, Ottawa's emergency notification system, received those alerts during Tuesday's severe weather.

Twenty-two patients at LaSalle County Nursing Home were evacuated Tuesday and relocated to Parker Nursing Home in Streator, Ill., which is about 20 miles south of Ottawa. Parker employees brought the patients' supplies, medications and personal belongings with them.

Kelsia Phillips, an administrator at Parker, said Wednesday a majority of the patients rescued have dementia. She is working to get in touch with each patient's family, to let them know their loved ones are safe.

At the peak of the storm, 9,500 customers in LaSalle County were without power. All electricity is expected to be restored by the end of the day Wednesday.

Officials said Ottawa's south side, the area east of Route 23 near the river, sustained the most damage. Access to that area is limited to contractors that have registered with police and people who live there. Residents must show identification to get in.

Chopper 7HD captured video Wednesday of an eagle as it flew over Ottawa, Ill., where a tornado caused major damage Tuesday night.

Ottawa and LaSalle County signed disaster declarations and submitted them to the Illinois Emergency Management Agency, the city said.

The community reached out to residents, trying to help people affected by the storm. The Ottawa/Naplate Illinois Tornado Recovery Facebook page was created to spread information.

For their safety, residents should not move trees in the "public right-of-way" or in areas where power lines are down. Officials said contractors will remove the trees. Dumpsters will be set up for homeowners to use downed trees and power lines have been cleared.

The Starved Rock County Community Foundation will accept donations to assist in disaster relief, the city said. For more information, visit the foundation's website or call 815-252-2906.

The small village of Naplate has a population of about 620 people. It's just a few miles southwest of Ottawa. Many residents were forced to take shelter after their homes were damaged or destroyed by a tornado that went straight through the town.

"It's a small community, very tight knit. We're just a bunch of common, hard-working people. We like our community. We like where we're at. Everybody knows everybody down here. To see the streets the way they look this morning, versus the way they looked yesterday morning, yeah. It's emotional," Naplate Mayor Jim Rick said, with tears in his eyes.

Naplate Fire Chief John Nevins said at a press conference early Wednesday morning that at least 50 of the village's 200 homes were damaged. The debris, including glass and splintered wood, was scattered everywhere. The storm took down a power pole and power lines, which hung down onto the road.

Jason Kennedy left his home, which is near Johnson's, just in time to get his girlfriend to safety at her house. A tree landed on the roof of his home. He said he had been remodeling it for six months and was almost finished.

"Yeah, it hurts. A lot of memories go through your head. But all you can do is look past it and get ready to rebuild. Be done with it, you know?" Kennedy said.

Nevins said the town's sirens went off about 15 minutes before the tornado hit. He also said to his knowledge, it was the first one to strike Naplate in its history. The weather service said before Tuesday, there had only been one tornado in northern Illinois in the month of February since 1950.

"It's scary to see. It's something that you don't expect. We're going to deal with it and rebuild," Nevins said.

Live this AM from #Naplate, IL #tornadoes. Lots of damage, no serious injuries. @ABC7Chicago pic.twitter.com/wSzRM5Vovm

The governor visited Naplate Wednesday morning. Rauner said at a press conference he was glad no one was seriously hurt and that the warning system worked well. He also said he will do anything he can to help the community get back on its feet.

"We're going to be helping with the cleanup, with the organization. We want to make sure that the insurance companies are responding quickly and helping the families recover and the businesses recover here," Rauner said.

"Above and beyond police and fire, the first responders were the community, the neighborhood. People were checking on each other," IEMA Director James Joseph said.

Utility company Ameren said as of 11 a.m., more than 2,000 customers were still without power in the area. Roads leading into town were blocked Wednesday morning. Authorities restricted movement around the village to let heavy equipment through.

Naplate residents are picking up the pieces after an EF-3 tornado ripped through their tiny town, and many are vowing to rebuild.

The Nanowski family home was one of dozens damaged or completely destroyed. Kathy Nanowski was just parking her black Corvette in a nearby garage when it hit.

"It knocked the garage down on top of the car, then it took the garage away and I got out," she said.

Jerry Nanowski, a veteran k-9 cop, thought he'd lost the family's dog Drake forever when his kennel was ripped apart in the chaos. After a frantic search, Drake was spotted 10 blocks away. Jerry thinks the storm's winds ripped his kennel from the ground, sending it airborne.

"He didn't know what to do. Two hours had passed when we seen him coming down the street. He was in shock," he said.

Alyssa Johnson was at her grandmother's house when the tornado hit. She lost everything.

"Now that I see it, that's my home, and now it's gone. But it's just a blessing that none of my family was in there besides the dog. Nobody was hurt. We'll just keep praying and go from here," Johnson said.

Johnson returned to her home early Wednesday morning in Naplate near 19th Avenue and Center Street. She was hoping her dog Satch would still be alive. She found him scared but unharmed.

A tornado was spotted in Dana, Ill., which is about 30 miles southwest of Ottawa. Justin Bowling posted video of the twister on his Facebook page. He said a home was damaged in the area where he recorded the video.

Sunna Brown posted video on Facebook of a tornado that touched down in Washburn, Ill. She was awestruck and didn't begin to run away from it until a man in the background called her to safety. At least eight homes in Washburn were damaged. ONe home had its garage torn off entirely. Despite all the destruction there, no one was hurt.

Josh Lesko was driving on westbound I-80 just east of mile marker 84 near Utica, Ill., when he recorded video of both a tornado and heavy hail falling onto his car.

Nick Behlke shared with ABC7 video of storms moving through Joliet overnight. The lightning was nearly constant as heavy rain came down.

A wild spin-out was caught on camera on the Dan Ryan Expressway overnight. A car got stuck in a flooded viaduct at West 63rd and South State streets on Chicago's South Side. Standing water closed lanes of I-57 near West Sibley Boulevard. There was flooding on the Jane Byrne Interchange and at an intersection in south suburban Homewood, where firefighters helped a woman and child out of their car after it stalled in high water at Dixie Highway and Park Avenue.

Drivers should exercise extreme caution when they encounter standing water. The height of the flood water is not always what it seems. 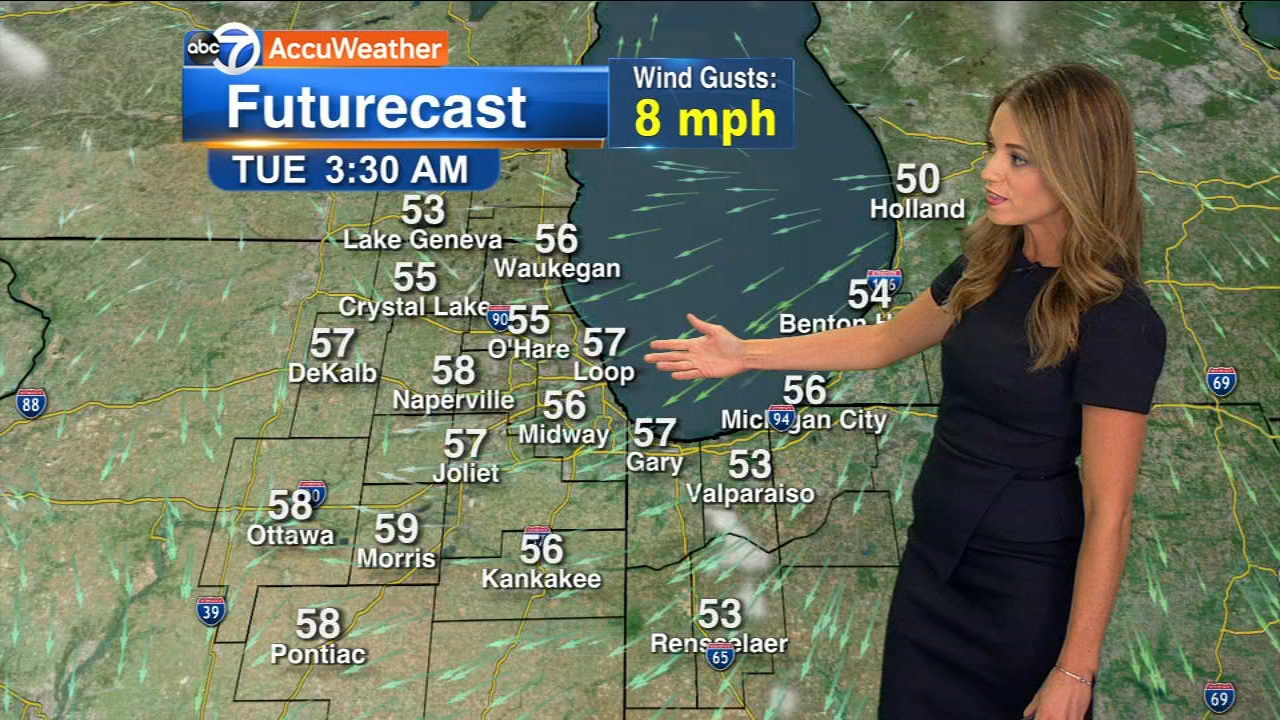