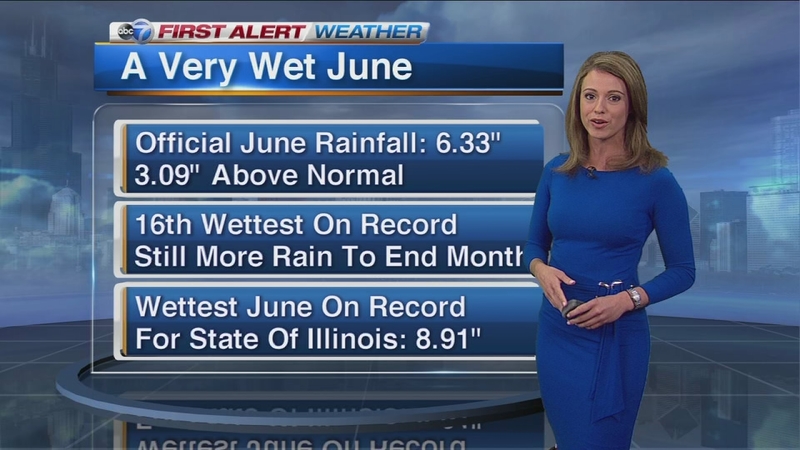 This is the wettest June in Illinois history, according to the Illinois state climatologist, and 16th in the city of Chicago. And more rain is on the way, not only in Illinois but also Missouri, Indiana, and Michigan.

In Chicago, showers and storms are expected through Monday night, according to ABC7 Meteorologist Cheryl Scott. The National Weather Service issued a Tornado Warning for Lee and LaSalle counties in Ill. after rotation was detected in the storm. However, it was canceled early when the storm weakened.

"The atmospheric conditions are favorable for the development of funnel clouds. These funnel clouds may protrude a few hundred feet downward from the parent cloud, rotate or spin like a top ... and last a few minutes before dissipating," according to the National Weather Service. "These funnels may briefly touch the ground and produce very minimal . . . if any damage."

A funnel cloud was spotted descending from a storm near the town of Millbrook in Kendall County just before 4 p.m., but did not touch down.

As of June 29, the official rainfall total in Chicago was 6.33 inches, which is 3.09 inches above normal.

According to Dr. Jim Angel, the Illinois State Climatologist, the average rainfall across the state is 8.97 inches, based on rainfall data collected on Sunday.

"I'm sure we will see that number move up as we include last night's rainfall," he wrote. 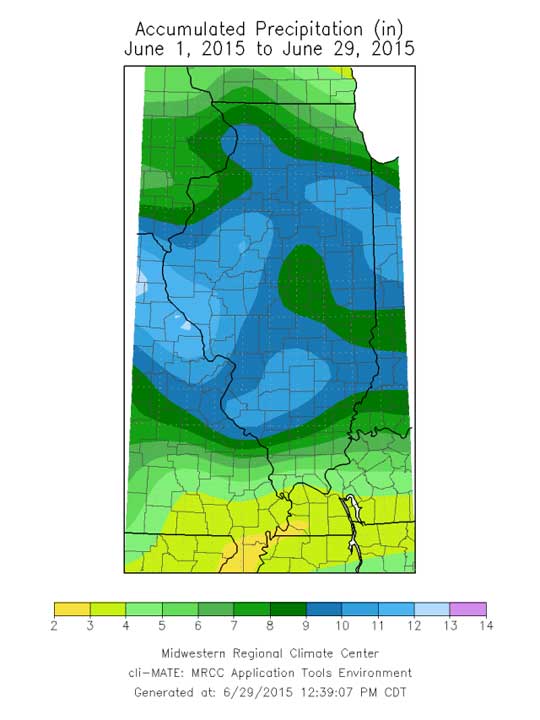 "Because it's been such a wet spring season, we have not only been able to keep our employees' hours, we've had an influx of people coming in because the parks are wet and soggy. Beaches are wet and nasty, as well," Rob Spengler, owner, said.

"This is a great place. I love that they cater to the older kids, also, because I have a 7-year old, a 3-year old and a 1-year old," grandmother Carol Conorquie said.

The rain has had the opposite effect on Ben Martinez's business, Martinez Family Landscaping.

"We aren't able to finish the hard scape, so basically, to dig to build a patio and do the foundations, it makes it a lot harder," Martinez said.

FLOODING ACROSS THE MIDWEST

Buyouts since the massive flood of 1993 have removed thousands of homes from the floodplains of the Midwest, but the flooding has closed hundreds of roads and swamped thousands of acres of farmland.

Parts of Missouri saw nearly 2 inches of rain over the weekend. St. Louis has received 13.1 inches of rain this month, 9 inches above normal and setting a June record with two days left in the month. It's also the second-wettest of any month since official record-keeping began in 1874; in first place is 14.78 inches in August 1946.

Flood-weary towns scrambled to protect themselves. In southeast Missouri, dozens of people fled Dutchtown and Allenville as the Mississippi River neared a crest of 12 feet above flood stage. In northeast Missouri, the Fabius River spiked 10 feet above flood stage, topping sandbags on a levee and forcing about 100 residents of a mobile home park to evacuate in Taylor.

The storms also brought severe weather, with three tornadoes touching down Sunday about 70 miles northwest of St. Louis and a possible one in a St. Louis suburb.

Other rivers were overflowing, too. The Illinois River was around 10 feet above flood stage at several points in central Illinois, flooding roads and a few businesses in places like Beardstown, Meredosia and Peoria. The town of Peru called off its July Fourth fireworks show because of the flooding. And in southern Illinois, the Ohio River was climbing toward an expected crest 7 feet above flood stage Saturday at Cairo, drenching farmland in that area.

Northwest Indiana has been hit particularly hard during June. Agriculture experts said last week the state's corn and soybean crop has already been reduced by nearly $300 million. That was before up to 4 inches of weekend rain caused rivers and creeks to flood and prevented storm sewers from emptying into them, resulting in street flooding in Muncie, Portland and other communities.

The Wabash River was so high in Lafayette, Indiana, over the weekend that it blocked access to a hospital. The river was still more than 10 feet above flood stage Monday after dropping a foot from its crest Sunday.

And in southwest Michigan, the overflowing Kalamazoo River drenched Stryker Field, home of the minor-league Kalamazoo Growlers. It'll be several days before the field dries out, and the cost of the damage is not yet known. Flood warnings were issued for several waterways in southern Michigan.