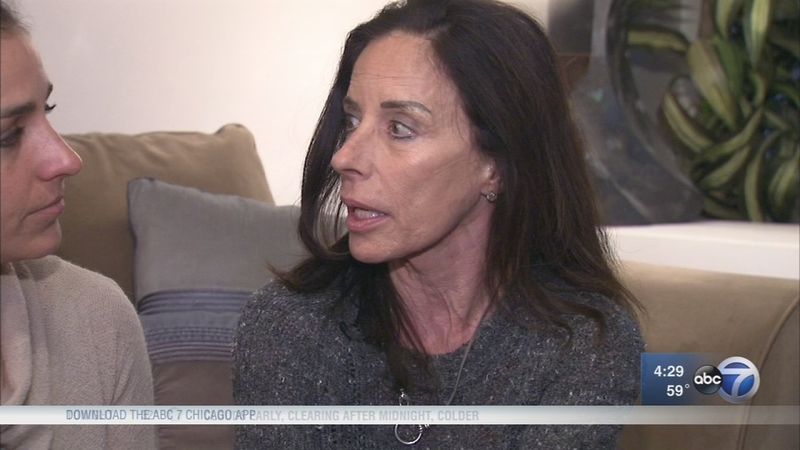 CHICAGO (WLS) -- Police are searching for a dangerous thief after a 69-year-old woman was shot during a robbery Monday night in Chicago's West Town neighborhood.

Silvia Berger said she was unloading her car in an alley in the 1900-block of West Erie Street after returning from a holiday trip when the suspect grabbed her purse.

"Even when he pulled the gun out, it never occurred to me that he was really going to shoot me," she said.

"Unexpected and fast" is how Berger described the moments between being robbed and shot. It happened around 7:30 p.m. Monday, just as she and her daughter, Bianca, and her family were unloading the car from their long holiday travels.

"I was walking back out to move the car from the alley and there was a car that was blocking it behind me," Berger said.

She said a young man with a hooded sweatshirt from that car and approached her. But instead of coming up to her, he ran to the driver side of her car and took her purse.

"I closed the door on him and started screaming and he popped it back. And I went after him and we struggled over my bag and he shot me," she said.

Berger said he shot her in her left leg and then jumped in the car that behind hers and sped off. Her daughter Bianca was in the house with her young son at the time.

"I can't believe people are shooting guns to steal a purse. Like what did they think they were going to get, was it worth a gun shot?" Bianca Berger said.

Investigators are now looking for a two-toned wood and maroon Dodge Caravan and are reviewing surveillance video in the area.

Berger's daughter said she hopes Chicago police does more to make sure her family and others in the neighborhood are safe.

"The crime shouldn't be happening this rampantly in this neighborhood," Bianca Berger said.

"You don't even believe it when someone pulls a pistol on you that it's really real. And for being shot, I'm very fortunate," she said. "It just means you have to make every day count."
EMBED More News Videos

Police are searching for a dangerous thief after a 69-year-old woman was shot during a robbery Monday night in Chicago's West Town neighborhood.

Rafael Robles, a long-time West Town resident, said he was walking his dog Monday evening when he heard gunfire.

"I was in my neighbor's street and we started talking and we heard a gunshot. We turned around and we didn't know where it was coming from," Robles said. "I got panicked and I said, 'Oh my God, I can't believe what happened.'"

He told ABC7 Eyewitness News he saw the getaway vehicle. Investigators are looking for a two-toned wood and maroon Dodge Caravan.

"A car just sped right front of us. We're saying, 'Holy c***, who was them people?' We didn't know there was an old lady that got shot," Robles said.

News of the crime was so upsetting to neighbors that one said he wants to move.
"We love the area. We thought it was going to be great. Unfortunately, it's not," said Andrew Field, who moved to West Town a few months ago with his family.

"We have decided we're going to pick up and move, immediately. It's just not feeling safe to us right now," Field said.

Robles said more needs to be done in light of the rise in crime he has seen in his neighborhood.