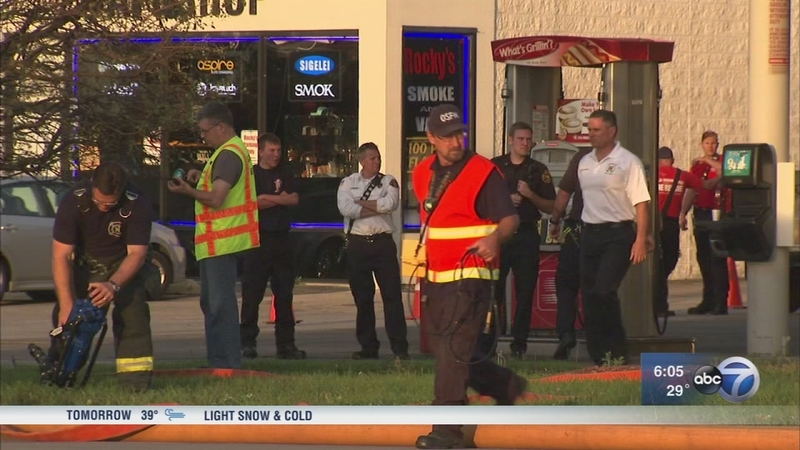 CHICAGO (WLS) -- Officials at a Westmont gas station knew about problems with an underground storage tank earlier than first thought, according to emails between suburban fire officials that have been obtained by the ABC7 I-Team. Gasoline from a leak at a Speedway station flowed into Westmont's sewer system, eventually causing a fireball, explosion and evacuations on Oct. 20.

Underground tank alarms "had been activated for about 1 month" according an email from Westmont Fire Prevention Bureau director Larry Kaufman. In that email to fire department officials, dated the day after the fires and explosion, Kaufman quoted the store manager who "stated that corporate claimed the sensors were faulty."

Speedway corporate officials have not responded to I-Team messages seeking comment on the accusation and they have yet to explain why local emergency officials were not notified of the leak.

Initially after the gasoline fireball, inspectors with the Illinois Environmental Protection Agency told the I-Team that Speedway was aware of a problem a few days prior to the incident. In a lawsuit filed last week, the Illinois attorney general stated, "Speedway became aware at some point between October 5, 2017 and October 15, 2017."

Now the Westmont emails, obtained under the Freedom of Information Act, reveal that Speedway officials may have had even more warning, possibly learning in late September that there was a problem percolating underground with one of its storage tanks. The gas station even began pumping out the leaking tank without notifying local officials, authorities have said.

Late Friday a spokesman for Westmont said village officials had no prior knowledge that tank alarms had been going off or that there was a leak. Village communications director Larry McIntyre told the I-Team that the alarms may have been occurring for three weeks to about a month. McIntyre also said Speedway officials told the village that the faulty tank sensor was replaced prior to the fires and explosion.

Last Friday Illinois Attorney General Lisa Madigan and DuPage State's Attorney Robert Berlin filed a lawsuit against the Speedway gas station at 6241 South Cass Avenue in Westmont. State and county attorneys said Speedway knew the underground storage tank "was itself compromised and was being infiltrated by water that was displacing stored gasoline, potentially causing it to be released from the tank."

In addition to the gas station remaining closed, the lawsuit asks that Speedway "perform air monitoring at any affected homes in and around the sanitary sewer system and investigate and address any contamination from the gasoline release."

There were 10 explosions and three injuries, 150 apartments evacuated and 14 manhole covers blown from the ground.

"Speedway has caused and allowed a substantial danger to the environment and public health and welfare," stated the lawsuit, which requests a preliminary court injunction against the gas station that would prohibit its immediate reopening.

The I-Team also reported in October that Speedway had been previously cited by state regulators for similar leakage problems at that location.

State of Illinois environmental agency records revealed that a gas station operating at 6241 South Cass Avenue in Westmont had underground leak problems in 1990, 2009 and most recently in 2016. Records also showed that in 2016 the underground tanks were nearing the end of what industry experts said was their safe longevity.