Election 2018: How this year's election results could set up the 2020 races Welcome to our Election Update for Thursday, Nov. 1!

According to all three versions of our forecast - Lite, Classic and Deluxe - as of 9 a.m. Eastern, Republicans have a 6 in 7 chance of holding on to the Senate. Every time a new poll fails to show Democrats gaining ground, the party's window to turn things around closes a little bit further. Their 15.3 percent chance of flipping the chamber (according to the Classic version of our model) is one of the lowest we've seen all cycle.

With numbers like that, the Senate may seem like a foregone conclusion. But that would be the wrong way to approach it. Even if Republicans hold the Senate, the margin by which they do so could be decisive for future elections. In contrast to the 2018 Senate map, which presented Democrats with very few opportunities for gains and exposed tons of vulnerabilities, the 2020 Senate map has several possible openings for Democrats. Republicans picked up nine seats from Democrats in the 2014 elections, including in the swing states of Colorado, Iowa and North Carolina. That means Democrats will be able to play offense when those seats are up again in 2020 and may have a decent chance of flipping the chamber - as long as 2018 doesn't dig them into too deep a hole. 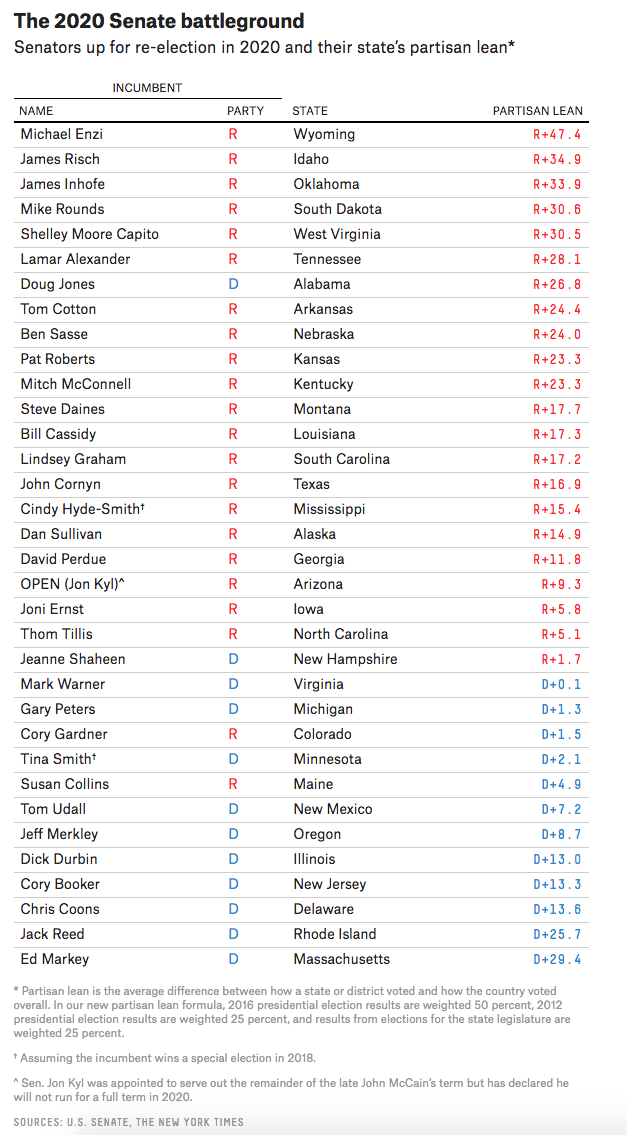 As you can see in the table above, Democrats have two obvious targets in 2020: Maine Sen. Susan Collins and Colorado Sen. Cory Gardner, the only two Republicans up for re-election in blue states. Four more Republicans sit in states that lean Republican by no more than 12 points, and so might be beatable in a favorable election environment or with the right candidates. Of course, it's not a given that Democrats will add any seats at all to their total in 2020: Sen. Doug Jones faces an uphill fight in deep-red Alabama. What's more, six more Democratic seats are also plausibly vulnerable.

Granted, we have no idea what the political climate will be in 2020. (We're still not sure what will happen five days from now!) But bear in mind that, although Democrats faced a terrible environment in 2010, President Barack Obama was comfortably re-elected just two years later, so even if Democrats prove to have a strong 2018, that doesn't mean the GOP can't turn it around in 2020. And if 2020 is a strong Republican year, Democrats probably have no chance at picking up the Senate no matter what happens in 2018. But let's assume there's no red wave in 2020 and that, thanks to the power of incumbency, Democrats are favored to hold all their current seats except Alabama in two years. What can they do in 2018 to make their task in 2020 as easy as possible?

Other than picking up the Senate outright, Democrats' best bet is to make a net gain of one seat (say, picking up Arizona - where Democratic Rep. Kyrsten Sinema currently has a 3 in 5 chance - while holding on to North Dakota or ousting Sen. Dean Heller in Nevada). That would create a 50-50 tie in the chamber - and there's a 14.6 percent chance that will happen, per our forecast. In that scenario, Democrats would have plenty of paths to a majority in 2020: They could hold Alabama and flip either Colorado or Maine; they could flip both Colorado and Maine while losing Alabama; they could even get away with winning just one of those three states if they also win the vice presidency (and therefore the tiebreaking vote).

But according to the model, there's a very real chance that the Senate's balance of power will simply stay the same: 51 Republicans, 49 Democrats. If that happens (our model gives it a 17.7 percent chance as of 9 a.m.), Democrats would need to hold on to Alabama and win both Maine and Colorado - or else pick up a seat in one of the four closest Republican-leaning states.

But our forecast also gives Republicans a 17.3 percent chance to net one seat and secure a 52-48 majority. In this scenario, maybe Republicans win with Missouri Attorney General Josh Hawley in that state (a 2 in 5 chance) in addition to Kevin Cramer in North Dakota, while Democrats win with Sinema in Arizona. That would be a big win for the GOP because it would force Democrats to hold Alabama, win both Maine and Colorado, and pick up a Senate seat in a red state in 2020 to gain a majority. Based on states' partisan leans, their easiest target would be Sen. Thom Tillis in North Carolina, which is 5 points more Republican-leaning than the nation as a whole. But we're starting to get into scenarios where a relatively neutral political environment in 2020 would be enough for Republicans to easily keep the Senate that year.

Let's say Republicans net two seats in 2018 - something our model assigns a 13.8 percent chance of happening. (For example, if the GOP holds on to Arizona while picking up North Dakota and Missouri.) Then in 2020 Democrats would need to hold on to all of their current seats (including Alabama) and flip four Republican seats. Their most plausible targets would be Collins, Gardner, Tillis and Sen. Joni Ernst in Iowa. Iowa is about as red as North Carolina, so Ernst wouldn't necessarily be a tougher target than Tillis, but Democrats couldn't afford to lose even one of those races, so the odds would be stacked against them.

Finally, there's a roughly 21 percent chance that the dam breaks and Republicans net three or more Senate seats this year. Democrats might lose their grip on seats like Indiana (where former Republican state Rep. Mike Braun has a 2 in 7 chance) or Florida (Gov. Rick Scott also has a 2 in 7 chance) in this scenario. The party would really have its work cut out for it in this case: Democrats would have to win all the seats outlined above plus places like Arizona or Georgia. Arizona may be feasible for Democrats in 2020, since it will likely be an open seat in a diversifying state. But that's true of Arizona this year, too.

This is all speculation, of course. There are lots of moving parts in both 2018 (who will win and where) and 2020 (which incumbents will retire, whether the political environment will improve or worsen for Republicans). But it's a useful exercise in understanding why Democrats should absolutely be sweating the difference between picking up one seat and losing one. Control of the chamber is at stake in 2018 ... and in 2020.