What we know about the Aurora mass shooting victims 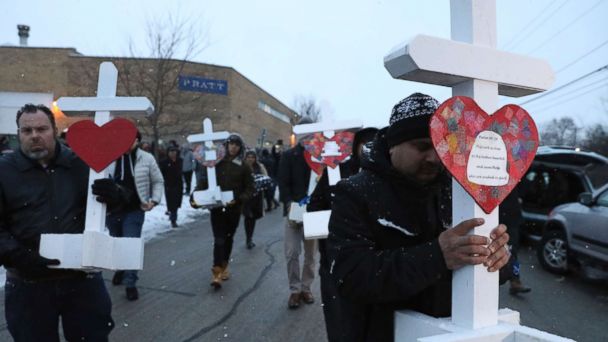 The five men gunned down in Aurora, Illinois, on Friday were all employees at the Henry Pratt manufacturing plant where the shooting broke out.

The alleged shooter, who was shot dead by law enforcement, was also an employee but was being terminated on Friday, according to Scott Hall, CEO of Mueller Water Products, the Henry Pratt parent company.

Six police officers were injured in the incident, as well as one employee, Hall said.

Here is what we know about the lives lost:

Trevor Wehner, of Dekalb, Illinois, was killed on his first day as a human resources intern at Henry Pratt, according to Northern Illinois University, where he was a student.

Wehner was expected to graduate NIU in May with a degree in Human Resources Management.

"That's what he wanted to do," his father, Tom Wehner, said of the internship, according to The Chicago Tribune. "He had hopes and dreams of doing what he was doing on his first day."

"Every Husker is a better person having known Trevor Wehner," his former high school coach wrote on Twitter. "Teammates, classmates, coaches, and faculty members can all remember a great story about Trevor and his fun-loving personality. He even made an impression on the younger kids in our community. We will miss you bud."

"Loss like this is devastating and senseless," university president Lisa Freeman said in a statement. "I ask our university community to please keep the Wehner and Parks families, friends and communities in your hearts and offer them caring thoughts."

"Our hearts are with the victims and their loved ones, the first responders, the Aurora community and the entire Mueller family during this extremely difficult time," Hall said in a statement Saturday. "As we grieve together, we will provide information in the coming days on the counseling services and support we will be offering to the families of the victims and to all of our colleagues."
Report a correction or typo
Related topics:
abc newsnational
Copyright © 2020 ABC News Internet Ventures.
More Videos
From CNN Newsource affiliates
TOP STORIES