It's Chicago Week on 'Wheel of Fortune' 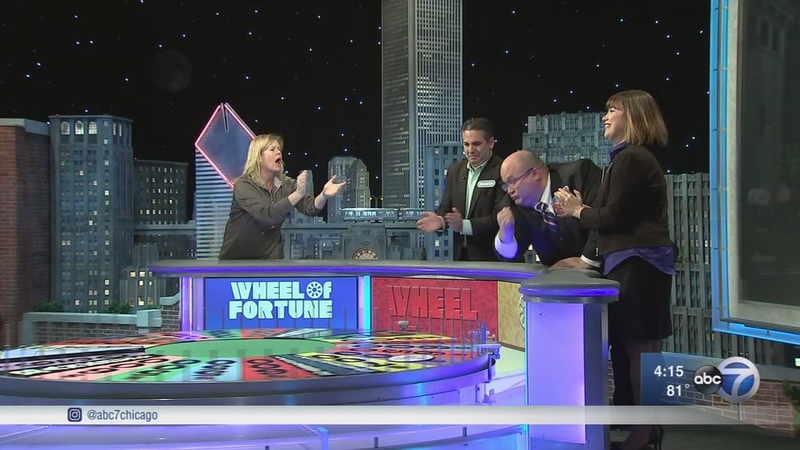 It's Chicago Week on 'Wheel of Fortune'

CHICAGO (WLS) -- It's Chicago Week on "Wheel of Fortune," and the whole show will celebrate our city -from an L train replica to local contestants.

"I've never been in a makeup chair, and I was able to do that today. And that felt really good. I almost want to call up Vin Diesel and ask him... do a double shot for him or something," said contestant Willie Everett, of south suburban Lansing.

It was just last summer when literally thousands of people auditioned for Chicago Week, and now only 15 are here to spin the wheel.

Practical Midwest thinking - and many of the Wheel family are from the middle part of the country.

"There is such a connection for many of us Midwesterners. I am from Omaha; there is something about the Midwest that is pretty special," said Harry Friedman, WOF executive producer
Perhaps that special attachment had Wheel people determined to find what happened to one of their contestant picks - like attorney Justyna Kruk of Lincoln Park in Chicago, who thought she had not made it.

"Two weeks later after we were supposed to receive our letters that we were going to be on the show, I get a phone call from a 310 number," she said. "I thought this was odd. And it was one of the producers from the Wheel. Apparently, one of my letters had been returned because I had moved."

How designers Chicago-fied the Wheel of Fortune set

The tapings took place in the Los Angeles area, but everything else was Chicago. Even the audience, who all won a contest to be in the studio where it happens.

"It's a little smaller but I can see the magic here," said Chicagoan Laurence Cepek.

Of course, Wheel's announcer Jim Thornton made sure he had a Chicago joke or two to get things rolling.

"It's not cold there all year, but I will say a joke like, ya know the other day at the Civic Opera House they had to chop up a piano for fire wood," he said. "But they got two chords out of it. I mean really bad... are we still on?"

The set was no joke - designers had to come to Chicago to make sure they had it right. The designers created so much layering of Chicago to make the set special. You can see the State and Lake building where ABC7 is.

"It's amazing how people will look at our set and say, 'Oh my God, that's where I live. I live in that building,'" said Jody Vaclav, set designer.

"This was such a fun one, especially with the L train and all of the great buildings - so many things Chicago had to offer," said Renee Hoss-Johnson, production designer.

The Chicago set actually has New York elements. To fill in background the pieces are from the 1933 King Kong film. Hard to see on camera... but look closely behind the Chicago architecture.

The Chicago audience cheered their hometown contestants on for a week that's all about our town!

When the Chicago audience came into Studio 11 - the first thing they saw was the Wheel Hall of Fame.

The hall of fame has Wheel memorabilia, from an audition photo, to an Emmy, to Mr. Jagger's album - things you would not expect to be Wheel-themed. Fascinating fan displays - but perceptions shatter when you get into that studio.

"I thought the Wheel would be much bigger than what it is in person," said contestant Michelle Defer, of northwest suburban Gilberts.

"I figured that the set would be small and the audience would be small. It's bigger than I planned," said contestant Todd Davidson, of Barrington.

Before they play the game for real, the contestants were coached one last time by, of course, a Chicagoan with a famous dad.

"My father is Tommy Edwards, the public address announcer for the Bulls," said Shannon Bobillo, contestant producer. "He was little Tommy Edwards from WLS - people may remember him from Animal Stories that he did with Larry Lujack."

Behind the scenes, spinning the wheel, hosting the show and the audience - all that special Midwest energy.

"The excitement, the audience, everyone together and just knowing that we all won - all winners here for Chicago," said Shirley Robinson, Chicago audience member.
EMBED More News Videos

From 1984 when the Wheel first spun in Chicago, to each time Pat and Vanna appear in our city - Chicagoans have loved America's game show.

Guess what? The feeling's mutual!

"I love Chicago - and I am not saying it because I am sitting with you - that is one my favorite cities in the country. I've taken my kids there. There is so much to do. The people are so nice. It's great. It really is a great city," said Vanna White.

"I left here a long time ago," Pat Sajak said. "I lived there for 20 years. I got my first start in Spanish radio, went to school there. You know, you are formed by those years and just the best people in the world."

"It was WEDC, which stood for Emil Denemark Cadillac. The showroom closed, but they kept the radio station. The guy spoke Spanish on the air, played Spanish music, Spanish commercials," he said. "Once an hour, I read the news in English. To this day, I don't know why, the only way I knew I was on the air - I didn't understand Spanish - the guy would say my name, and I would start reading."

But that wasn't Pat's first time in front of a microphone.

"My first-ever broadcast appearance, I was a guest teen disc jockey on Dick Biondi on WLS radio. I was in high school. He had a contest - you'd come in and cohost an hour with him - you'd send in a postcard. So the first week, some kid was on, and he said let's draw next week, and they pulled my name out. And that was my first time," Sajak said.

Leading to Emmy Awards and becoming one of the most famous Chicagoans on television.