CHICAGO (WLS) -- A busy day at Chicago polls as voters cast their ballots for the next Illinois governor.

"We've had very good turnout so far this year. We've had lines most of the day," Ray Seranko, election judge, said.

The Chicago Board of Election believes turnout will be between 44 and 53-percent on Tuesday.

"If you have anything to say against the government, or for the government, you need to actually come to the voting polls and do it. That's the only way you really get your voice shown," Jessica Green, voter, said. 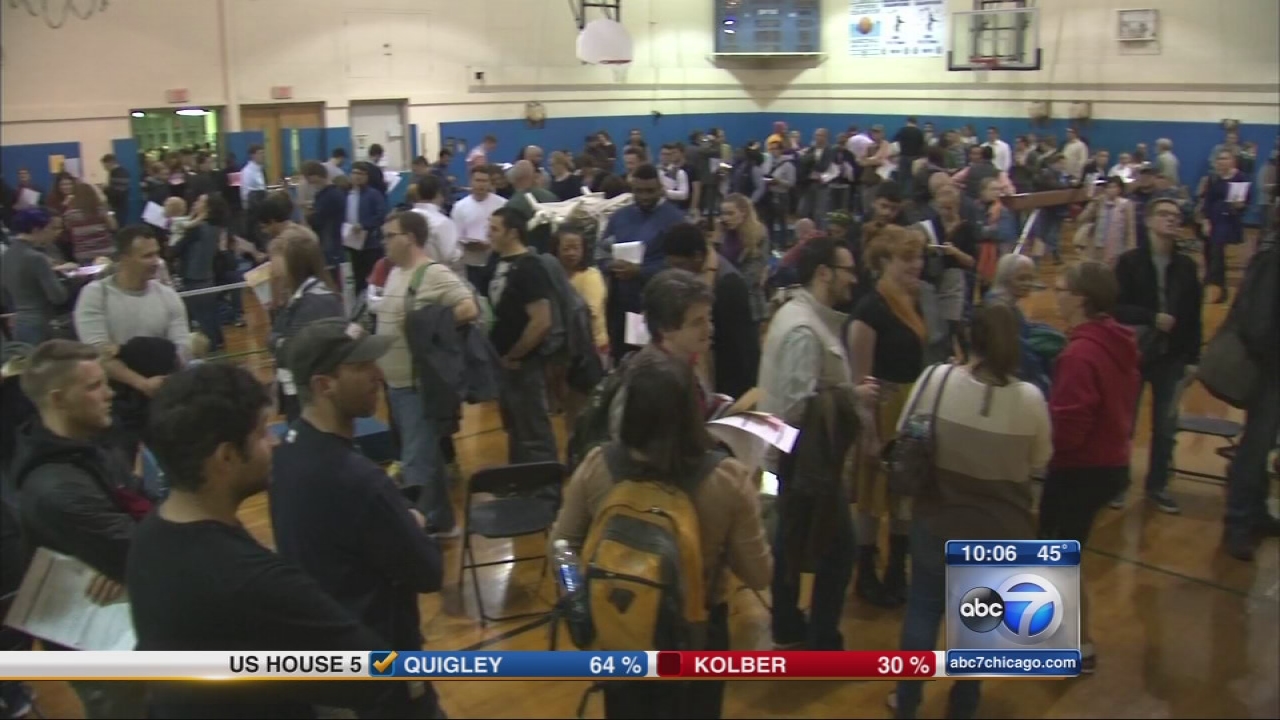 Long lines at some Chicago locations
A slow start and finish for some polling locations in Chicago after judges failed to show and Illinois' first same-day voter registration backed up for hours on Election Day.

Voter turnout in off-year elections is traditionally lower than when voters choose a president. However, the tight race for governor seems to be drawing people to the polls.

"The governor's race has been close for weeks. It's been neck and neck," ABC7 political consultant Laura Washington said.

The city of Chicago tends to turn out huge for Democratic candidates compared to suburban Cook and DuPage counties, which tend to vote heavily Republican. Turnout is high in both areas.

"We're looking at close to record numbers," Pete DiCianni, Republican political consultant, said. "Fifty-five percent is the record in a midterm election for DuPage County, and we're tracking at almost 53-percent as we speak."

Illinois voters will decide whether Pat Quinn gets another term or if Republicans will reclaim the governor's mansion with businessman Bruce Rauner.

Combined, the candidates have spent close to $100 million as Democrats try to hold on to President Barack Obama's home state and the GOP eyes an opportunity to pick up control of another Democratic stronghold.

Quinn campaigned at the Millennium Park Metra station on Tuesday morning and voted at his Galewood neighborhood polling station.

"We want to make sure our state economy keeps going strong. We want to invest in education and definitely raise the minimum wage," he said.

"People have gotten out. They have voted early. We're breaking records for that, so I think that's a very good sign for the Democrats," U.S. Rep. Robin Kelly (D) south suburbs, said.

Rauner, a wealthy venture capitalist who is making his first bid for public office, voted with his wife in his hometown of Winnetka. He took no questions on Tuesday.

Rauner used more than $25 million of his personal fortune to sell himself as an outsider.

"We have more volunteers than anyone has ever had before knocking on more doors, making more calls. And they're doing it because people want to change direction," Chip Englander, Rauner campaign manager, said.

Libertarian Chad Grimm is also running for Illinois governor. He picked up an endorsement on Monday from William Kelly, a Republican running for Chicago mayor. In a recent Chicago Tribune poll, 4-percent of likely voters favored Grimm. 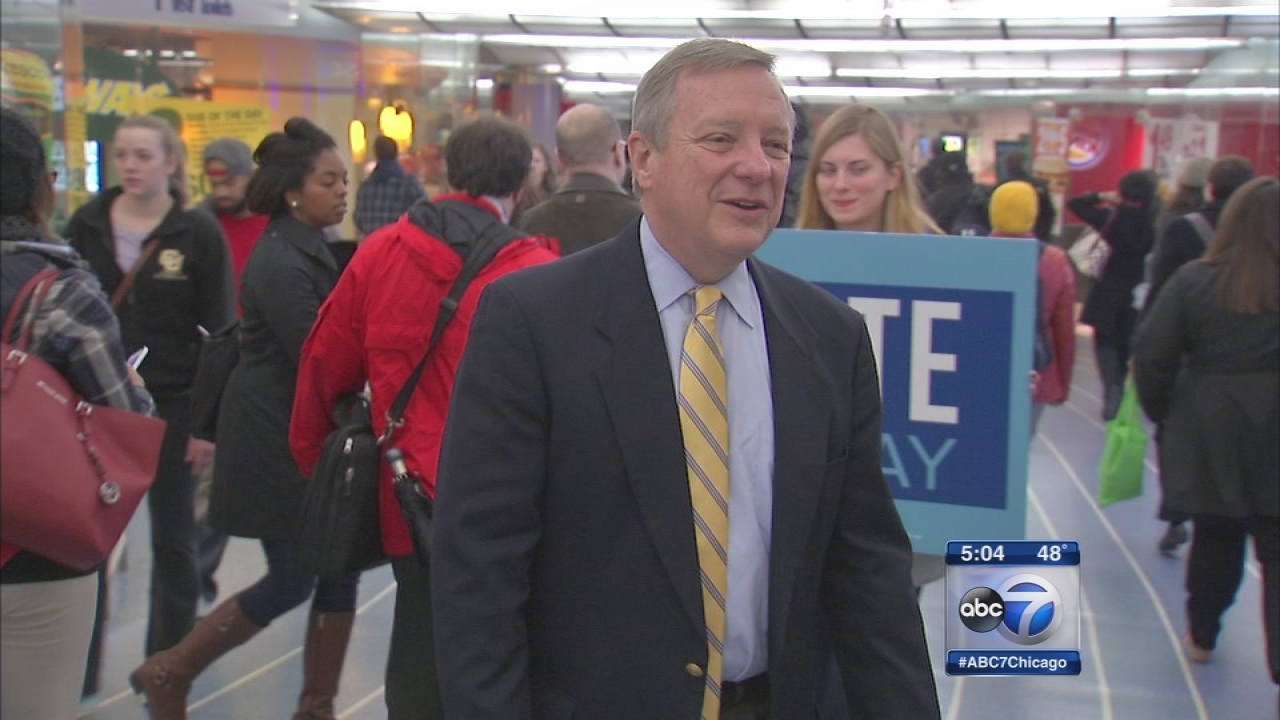 Durbin, Oberweis make final push
His voice hoarse and his party under attack, Dick Durbin has more than his race against Jim Oberweis on his mind.
DURBIN V. OBERWEIS

His voice hoarse and his party under attack, Dick Durbin has more than his own Senate seat on the line.

"It's a long, long struggle. A lot of tension and anxiety today waiting for the final decision by the voters," Senator Durbin said. He currently holds the second highest-ranking position in the Senate as the assistant majority leader.

But if Democrats lose control of the chamber, that'll change. Republicans need to pick up six seats and several states are in play.

"I am hoping we are going to have a new majority to take America in a different direction," Senator Mitch McConnell, (R Minority Leader) said.

"The early vote is terrific across the state. We promoted early voting, vote by mail and across the state there's dramatic improvement over four years ago, the last off-year election," he said.

Oberweis, a wealthy businessman with namesake dairies, voted in his hometown of Sugar Grove.

"We've got our fingers crossed. I think that voters have a real opportunity to send a message to career politicians that enough is enough," he said.

Oberweis and Durbin both voted early. 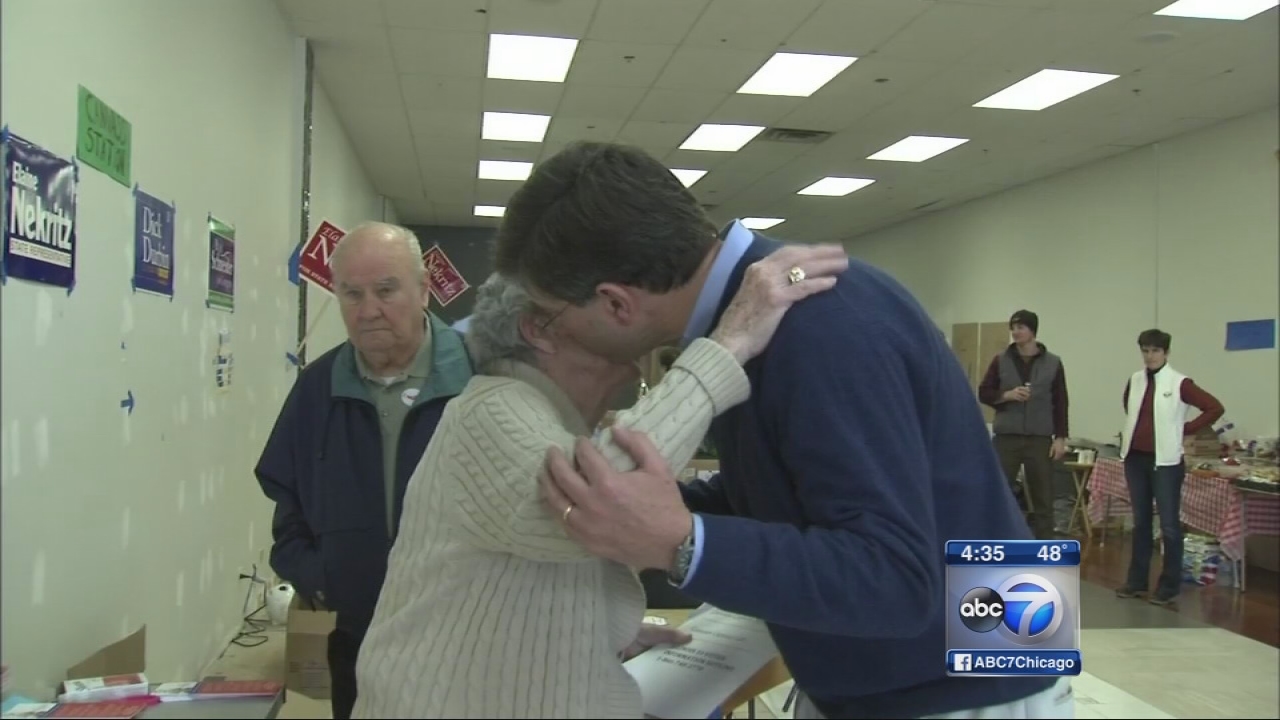 10th Congressional race
Both candidates- Republican Bob Dold and Democrat Brad Schneider- were campaigning down to the wire on Tuesday.
10th CONGRESSIONAL DISTRICT

Both candidates- Republican Bob Dold and Democrat Brad Schneider- were campaigning down to the wire on Tuesday.

"We won last time by 1.01 percent and when you win a race that close, you count decimal places. Also every call made, every door knocked, everything every single person does makes a difference," Schneider said.

Dold is also out on the campaign trail. He traveled by custom bus to communities and got some support from fellow Republicans, Congressmen Peter Roscam and Randy Hultgren.

"It's great to have friends and people that are understanding what we're going through right now," Dold said.