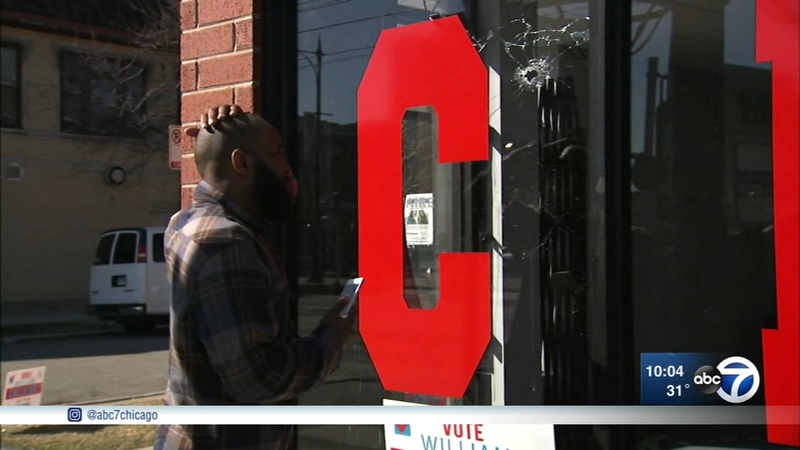 CHICAGO (WLS) -- A campaign office for 5th Ward aldermanic candidate William Calloway was shot at Monday afternoon in the South Shore neighborhood on the South Side.

Gunshots caused damage to the building at 2:49 p.m. in the 2000 block of East 71st Street, according to Chicago police. Calloway's campaign office is located at 2030 E. 71st.

Calloway is an activist perhaps best known for his efforts to get the dash cam video of Laquan McDonald's murder released. He's in a tight runoff for 5th Ward alderman against incumbent Leslie Hairston.

Calloway started a Facebook Live video stream shortly before 3 p.m., claiming his office was shot at and showing bullet holes in the windows. Calloway said he and four campaign workers were inside making phone calls.

"We just heard the shots go off. We really ain't seen where it was coming from, wherever it was it had to be driving past though because it happened so fast. Roll past, the first shot came through," he said. "Everybody hit the deck. Then we heard a couple more shots rang out. Two more hit our store front."

No injuries were reported and no one is in custody in connection with the shooting, police said.

The motive for the shooting remains unclear - though Calloway said he'd be "nave" if he didn't think it had something to do with the election.

"We all know what type of city we live in. This is a unique city," he said.

Just last week, Hairston's campaign accused Calloway of being a deadbeat, citing numerous unpaid parking tickets and back rent owed to the landlord of that South Shore campaign office.

"That type of violence is very disturbing and has no place in our community," a spokesperson for Hairston told ABC7 Eyewitness News of the shooting.

Meanwhile, Calloway said Monday that the matter with the landlord had been settled after the two parties reached an agreement.