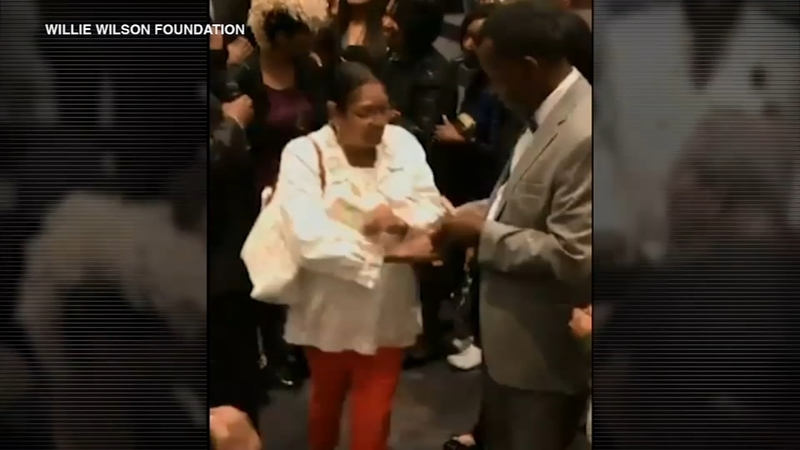 CHICAGO (WLS) -- Chicago mayoral candidate Willie Wilson gave away cash on Sunday at a South Side church as part of his effort to help the needy.

Wilson was at New Covenant Missionary Baptist Church giving out tens of thousands of dollars to help people during an event he organized.

The State Board of Elections said the cash and check giveaway, which was done via his charitable foundation, does not appear to have violated any elections laws.

Wilson was called out by Gov. Bruce Rauner, who also attended the event and was put on the hotseat over the perceptions of what went on.

"I did not see anybody hand out any cash yesterday," said Rauner who said he was not aware of Wilson's giveaway.

Rauner said that a candidate for office giving away cash is "outrageous."

Rauner, at a bill signing Monday that dissolved the DuPage County Board of Elections, said he did give Wilson's foundation $100,000 to help pay people's property taxes. Wilson kicked in $200,000 of his own and gave away tens of thousands of dollars in cash Sunday to people with other needs.

Rauner said if any of his money was handed out in cash, he was going to demand it back.

"None of it was the governor's money, his money was given in checks," Wilson said.

"It doesn't really matter to me what people think, because you should look at my record, it proves I've been doing it for years. And people have to make their own decisions from that, but certainly I'm not going to do anything that break any laws," Wilson said.

Wilson and Rauner both said that at no time did they ever ask for people's votes.