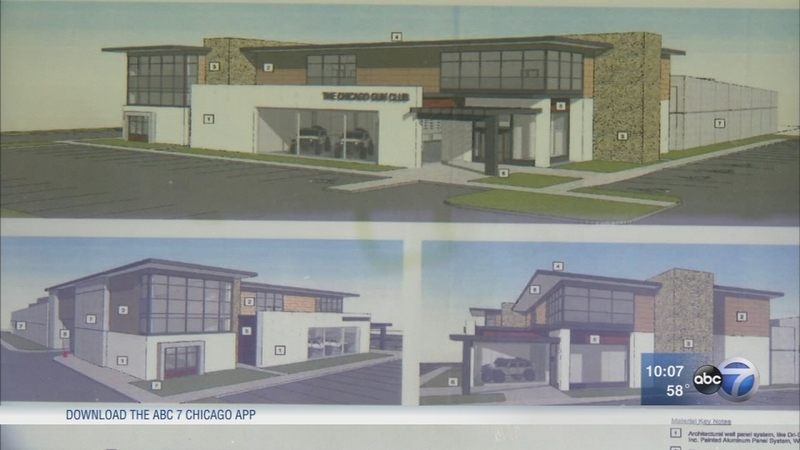 WILLOWBROOK, Ill. (WLS) -- Heated debate was on display at a Monday night village board meeting addressing a proposed gun range with a bar in southwest suburban Willowbrook.

"You did a lousy job of letting the people know what you're up to with this proposal," said resident Sarah Schlenker to cheers.

At issue is a proposed 31,000 square foot gun range named the Chicago Gun Club, to be located on vacant land just off the Stevenson Expressway near Route 83.

"There are not enough quality facilities... to train..." prospective owner Joe Neveril argued, interrupted by boos from the crowd.

The facility is being marketed as more than your average shooting range, but also an entertainment destination complete with a retail space as well as an upscale members-only lounge where alcohol would be served.

"I believe it's good for the community. I believe that these people have made a proper presentation," said John Wagner, Willowbrook resident.

The developer said strict rules would prohibit anyone drinking in the lounge from also using the shooting range, but there was vocal skepticism.

"I do not believe that a business with firearms, alcohol and ammunition under the same roof belongs 500 feet from families," said Willowbrook resident Zoltan Baksay.

Opponents took out newspaper ads and presented several hundred signatures on a petition asking the city council to vote against the license for the gun range.

"The fact they wanna put a bar in this one is ludicrous. Guns and drinking don't mix, no matter what," said Michael Lambke, gun range opponent.

Willowbrook's mayor said there are thousands of Firearm Owner Identification cardholders in the area, as well as more than 11,000 concealed carry licensed gun owners in the county. The owner said his range would serve as a training ground for many of those people.